Blessings in a back pack 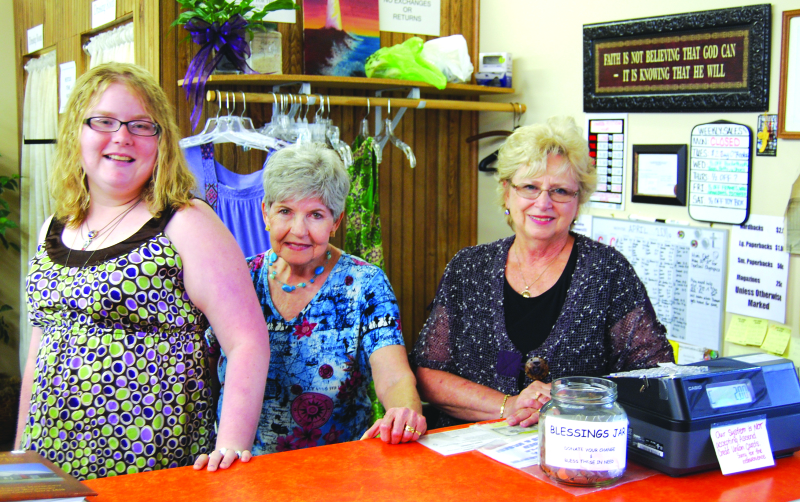 Among the 15 to 20 volunteers, who help keep things humming at the Cannon Outreach & Thrift Store counter, are, from left, Myra Johnson, Sharon Odom and Faithe Cook. Photo by Ken Beck

An adult, digging through one of these colorful backpacks, might think there's not much here: a couple of small cartoons of milk, two juices, two cans of protein, two cereals, a snack bar and two fruit items.

But once you understand this is going to a child who may not know where his or her next meal is coming from, well, then you know it's substantial. And after you discover these backpacks go home every weekend with 350 Cannon County schoolchildren, you understand this is something that packs a generous wallop.

The containers wear a wonderful name that spells it out right: Blessings in a backpack.
It's a five-year-old ministry of the First United Methodist Church of Woodbury that began small, but today serves children in all six of the county's grammar schools. Most of its funding comes from the church's Cannon Outreach & Thrift Store on South McCrary Street. The store proves to be a bountiful blessing in itself.

How this all began?
John Wesley Hembree, minister of First United Methodist Church of Woodbury, shares, "Five years ago we were looking for ways to connect with the community and help the needs that were going unmet. We talked to a number of school teachers, and they reported to us they had many students going home on weekends hungry, and there was no supplemental food source for them when not in school.
"We looked into various backpack-related programs to learn and find out about it, and we started with one school, Auburn Elementary School."
At first, members of the congregation signed on to cover the cost, but, like a tiny seed planted in fertile soil, the program sprouted into a healthy tree and began bearing good fruit.

"Once we started, word spread throughout the county, and other teachers at other schools asked for support for their children," Hembree said. "So the next year we helped another school, Eastside. Very soon it became evident that we were going to have to make this available for all the schools.
"So we started looking to alternative ways to generate funding, and one of the things we looked into was a thrift store. We visited lots of thrift stores around Middle Tennessee and in the Southeast United States to learn about the operations and what they were doing and what was working, and we saw there was not a thrift store in Cannon County at that time."

Thus, the church opened the thrift store on July 31, 2013, with its primary goal to use the resources to fund the backpack program, and secondly, it would make small contributions to Cannon County SAVE (victims of domestic abuse).

"Operating the thrift store is an amazing undertaking, and we depend on the generosity of the community at large to make donations to the thrift store with the understanding that it all stays in the county," said the minister.

"We also are very blessed to have a number of individuals from other churches in the county that volunteer a few hours of their time to work at the thrift store," he said.

The church purchases food items in bulk from Second Harvest in Nashville once a month. Every Wednesday night, volunteers convene at the storage facility and set up an assembly line to pack the food in the packs that are next put into plastic crates and then placed into different vehicles so that volunteers can deliver these on Thursday mornings. The schools distribute the backpacks on Friday to the children before they go home for the weekend.
"In Cannon County, one out of four children doesn't know where their next meal is coming from," said Hembree. "We know that through these efforts and the combined efforts of others in the county who help support the thrift store, we are able to make a difference in some of these children's lives so they can have nutritious food items they normally would not have access to.

"That's the biggest blessing. There's nothing else we are expecting out of it, just trying to provide a need."

While the children receive their food every Friday, the Cannon Outreach & Thrift Store opens its doors 9 a.m.-6 p.m. Tuesday-Friday and 9 a.m.-3 p.m. Saturday.

"I am all about feeding women and children. I felt there was a need, and I wanted to do the best I could to feel that need," recalled Franklin, who has been here since the doors opened.

Ardoin enlisted two years ago, saying, "I retired from Journeys in Community Living in Murfreesboro where I worked with people with mental disabilities. I needed some place to volunteer. After volunteering here and seeing the good being done for people in Woodbury, I helped more hours, and then they offered me the job to assist Mimi."

Filled to the brim with a little bit of everything, the store offers household items; clothing for men, women, children and infants; books and DVDs; furniture; and one room devoted to children's toys and games.

Typically, items range in price from a quarter to $70, with furniture being on the high end. Their biggest sale on record may have been a Danish dining set that sold for $500.

Says Franklin, "We have clothes, housewares, books, knickknacks and a lot of weird odds and ends. Some things we don't know what they are. We ask customers."

Ardoin noted, "We got a lot of clothes with tags. They have never been worn. That helps us put a price on it, but much, much less. We'll get some $115 slacks and put $5 or $10 on it. If you know your brands, this is the place to come for shoes and handbags."

The thrift store also serves as a sort of first-aid stop for folks who may be in a tight spot. The volunteers who minister here give household items to those who have lost their home in a fire and supply clothes to senior citizens who may be going on their first job interview in years as well as to women who may have fled abusive situations.

"Mimi and I listen. Sometimes people like to talk. If we find out a need, there's always a certificate for them," said Ardoin, referring to $30 certificates they give to needy individuals that may be used to purchase clothes or shoes.

Franklin mentions the store has resounded with "so many little God stories."

"Somebody bought some eyeglasses in a case and took them home. Later they found $10 in the case and brought it back and put it in the blessings jar," she said.

"One lady had been given a nice red coat. She later brought the coat to us and said, 'Give it to a woman who needs it.'

"After I hurt my foot, a woman brought me her crutches. Later she said, 'Why don't you keep them at the store?' and they've been loaned out three times."

The thrift store and those behind it took on a new perspective for Ardoin, whose house burned in January.

"From these people and this place I was supplied with everything I needed for my home," she said. "This is a very giving store. No questions asked. Just get what you need. Not just me either."

Franklin said of her hours spent at the store that she enjoys most "connecting with the customers" and making this "their safe place. There's a lot of hurt out there. . . . Sometimes people just need a hug, and I'm a great hugger. That's my trademark. I get to know their names, and they get a hug."

"After she hugs them, I make them laugh," chimed in Ardoin. "There is fellowship and helping here from the people of Woodbury. It's a joy to come to work. It's always happy here. The smiles of the people are the treasures."