Mending the Trail of Tears 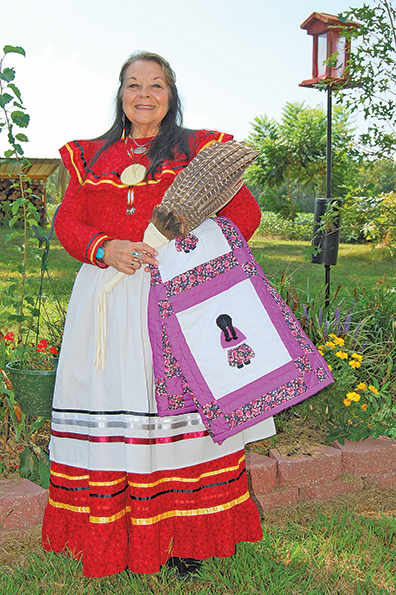 Most know it as the 'Trail of Tears', but descendants of the Five Civilized Tribes describe the experience endured by their forefathers as "where we walked and where we cried."

Thousands of Native Indians, mostly Cherokee, died along the 1,000-mile forced march from North Carolina, and some were laid to rest in Woodbury.

Melba Checote Eads, an enrolled citizen of the Muscogee Creek Nation of Oklahoma and great-great granddaughter of Great Chief Samuel Checote, has lived in Cannon County since 2008. She has been guiding commemorative 'Trail of Tears' walks for eight years, including walks in Woodbury over the past five years. She plans for this year's event to start at 12:30 p.m. Sunday at First United Methodist Church of Woodbury.

"We want to lift up the Trail of Tears as a reconciliation kind of a thing. It lifts up not only Cherokees but all the tribes. Particularly in Tennessee, you had Muskogee people walk with the Cherokee," said Eads. "The Trail of Tears went right through the middle of Woodbury. Several guides were buried near here. There is a house in Woodbury that we call a witness house.

"When I moved to Woodbury, I gave up being caretaker of our ministry [the Native American Gatherers Fellowship]. It seemed like the Trail of Tears became the reconciliation of our ministry."

It was in 1994, while with her family church, New Town Indian United Methodist Church of Okmulgee, at the sesquicentennial of the Oklahoma Indian Missionary Conference in Tahlequah that she felt called to minister.

"I feel very strongly that this is my calling. I spent a lot of my life being bitter. Many of our people were murdered in the Creek War, but it's a choice. Now we see the path, and we are still here because God meant us to be here. We may not be the full blood or look like the first people were made, but God still means for us to be here and that is a blessing."

With September being American Indian Heritage Month, Eads will be busy. She speaks at 11:30 a.m. Wednesday at the Cannon County Senior Center and will show a 28-minute documentary, "The Trail of Tears." At 12:45 p.m. Sunday, she will lead a commemorative Trail of Tears from First United Methodist Church of Woodbury to the courthouse. Eads also helps coordinate the annual Mt. Juliet Pow Wow, which will be held Sept. 24-25.

"This year we will meet in the church parking lot and walk down Main Street to the courthouse and stop and have a prayer and remembrance there," she said of Sunday's event.

"Where we walk on Main Street, we are retracing that trail. There were 15,000 Cherokee and their slaves, but there also were 500 or more Muscogee people when they walked the trail. It's a goal of mine to see a commemorative sign at the courthouse that will lift up the Cherokee and Muscogee people who walked here.

"It is also my goal to inspire some of the youth of the Muskogee Creek to join the Remember the Removal Bike Ride that comes through Woodbury next June."

Asked to explain what "witness houses" were Eads said, "These are houses that witnessed the trail. They were built before the Trail came through there. The families who lived there saw the people and were witnesses to the trail."

She knows of at least four witness houses in Cannon County: The William Cannon Houston House, the Alexander Place, Pascal/Rucker Farm and The Corners.

A missionary to the Cherokee Nation gave a vivid, first-hand account as he traveled the Trail of Tears. Below are some of the words that come "From the Journal of Rev. Daniel S. Butrick, 1838-1839" as he described his group's journey through Cannon County.

Mrs. Butrick & myself went on a little before the detachment, & after travelling a mile or two, stopped at a house to dry & warm us, the first time we had been in a house for about five weeks.
Here we were refreshed and comforted a few moments by the fire, till the detachment came along, when we joined them and went to a camping place near Stone River.
The rain still continued. We stopped to camp again in the wet, but as it seemed necessary to have some new oil cloth to put on the top of our carryall, I rode to a little town called Woodbury about one-half mile distant.
On entering a store, the first person I saw was Mr. Trott, formerly a Methodist missionary in the nation, and as he requested us to spend the night with him, we very gladly accepted the invitation. I returned to the camps, and with my dear wife & Jonas, went to his house, where we were peculiarly refreshed. We had not before eaten at a table for five weeks. This kind refreshment seemed provided by a kind Providence, as we seemed, on the point of failing through fatigue and exposure.

This morning I puked up my breakfast, and felt that I must soon yield to sickness & disease.

Thursday (November 15)
As the detachment come on we proceeded about 6 miles, & camped near Stone's River, having crossed the river four times.

Soon after we had pitched our tents, a great company of white people came in, as eager, apparently, for money, as ever birds of prey were for a dead carcass. Some appeared civil, but others were awfully profane.

As for her presentation Wednesday at the senior center, Eads said, "I'm going to talk about the five tribes that were removed and mention that my family was removed from Fort Mitchell, Alabama, and talk about the trail in Woodbury. How they came from Blythe Ferry Landing near Cleveland, Tenn., and then came up over Monteagle to the Cumberland Plateau down through McMinnville on to Woodbury.

"The Cherokee has done a good job of telling their story, but we have not done quite as well. You know the Trail of Tears passed through 39 Tennessee counties. We have Muskogee citizens here in Tennessee."

Eads was born in Okmulgee, Oklahoma, and her father, a Creek, served as a deep-sea diver in the Navy. Her mother is non-Indian.

Eads and her husband, Gary, met at Alvin Community College in Alvin, Texas, where she finished high school. She became a licensed practical nurse at Galveston City Memorial Hospital and currently works for Vanderbilt Hospital in pediatrics as she serves special-needs children in their homes. She and her husband have four children and three grandchildren.

They came to the Nashville area in 1994 and lived in Hermitage for three years and then resided in Mt. Juliet from 1998 to 2008.

"Those first few years in Tennessee," she says, "I never met any Indian people. In 1994, God called me into ministry. I thought that the only place I could do that was home in Oklahoma, but it is 20-something years later and I'm still here.

"When I came back after that trip to Oklahoma in 1994, I met some Navaho and Mississippi Choctaw and Dakota. All of a sudden these people were everywhere. My eyes were opened.
We started a ministry at Dodson's Chapel in Donelson and called it a Native American Gatherers Fellowship because we were gathering Native-American people."

A certified lay preacher of the United Methodist Church, she recently has gone back to college online with Bascone College, which is affiliated with the American Baptist Church and embraces a historical educational mission with American Indians, working on a contextualized Native American ministry degree.

"I'm there in spirit, only through the Internet," Eads said with a laugh.

She said, "My Creek dress is sometimes called a ribbon dress. Our traditional dresses are made of calico fabric with ribbons on the upper part and around the bottom ruffle and cuffs. There is always an apron with our dresses. The pocket is said to always have a handkerchief with some silver coins in it. The silver is so we will always have money for an offering.

Senior Center
Melba Checote Eads will speak at 11:30 a.m. Wednesday, Sept. 14, at the Cannon County Senior Center. She will discuss the five American Indian tribes (Cherokee, Muscogee Creek, Chickasaw, Choctaw and Seminole) that were forced to leave their homes in the southeastern United States and move to Indian Territory and also show a 28-minute documentary, "The Trail of Tears."

Commemorative Trail
of Tears Walk
The Trail of Tears Walk will begin at 12:30 p.m. Sunday at 502 W. High Street and proceed down Main Street to the courthouse. There will be a short program and lunch at First United Methodist of Woodbury after the walk.