He went in a private, came out a Lt. Colonel 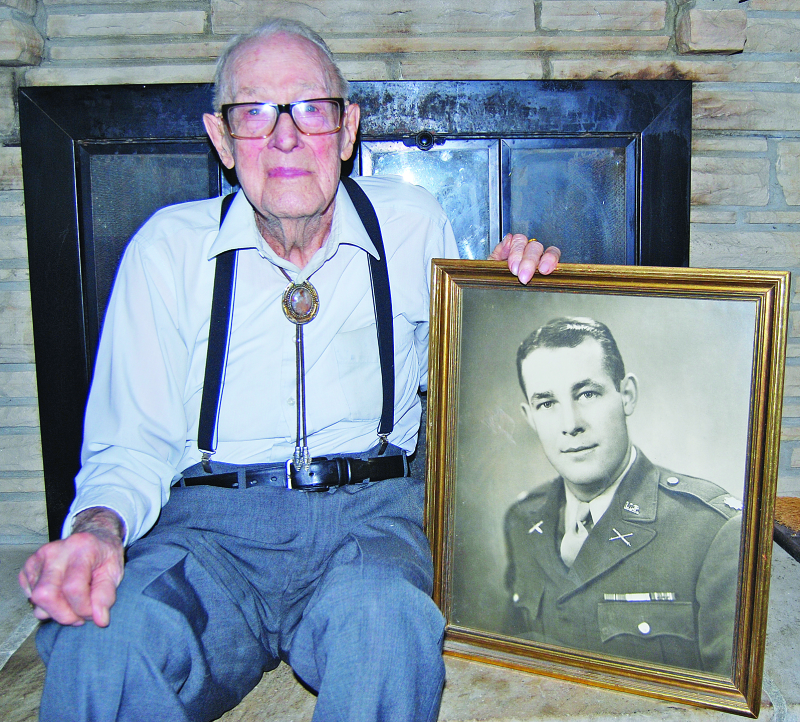 Auburntown native Frank Willard, who turned 100 June 11, holds a portrait of himself as he appeared during World War II. Willard entered the war as a private in 1941 and came out a lieutenant colonel seven years later. He served in Europe with the 738th F

Cannon County's Frank Eagleton Willard has seen the best and the worst of mankind over nearly a century of living.

The Auburntown native plans to celebrate his 100th birthday next week with family and friends at his home in Clarksville, Tenn.

Willard served during World War II as the S-3 in the 738th Field Artillery Battalion in a unit that was part of Gen. George Patton's Third U.S. Army.

On the morning of April 22, 1945, he entered Buchenwald concentration camp and saw the horrors of a death camp. Among other sights, he looked upon piles of naked bodies that were nothing but skin and bones.

Shortly after this experience, Willard wrote an article about what he witnessed for The Cannon Courier. Near the end of his story, he concluded, "What I have seen the past Atwo months has made my heart bleed and say many times, 'Thank God I'm an American, and thank God Hitler never got to America.'"

His original story appears with this feature. Please read his description of what he saw firsthand some 72 years ago.

The son of W.G. and Gertrude Willard was born two miles west of Auburntown on June 11, 1917. He and two sisters, Lillie Willard and Alberta Griffith, both of McMinnville, are the only three survivors of 11 siblings in the family. Their father had a farm and raised cattle, sheep, hogs, corn, wheat and hay.

At the age of 11, Willard was sent to live with grandfather, Matt Willard, and stayed with him until his death in 1933. His grandfather set aside $500 that Frank was to use for college.

After graduating from Auburn High School in 1936, he entered Middle Tennessee State University that fall. Two years later he began teaching at Cannon County schools and taught one year at Jones' Chapel on Pleasant Ridge and two years at Sanders Fork School.

"I attended MTSU for two years after high school. At that time you could teach in elementary school if you had two years of college," said Willard, who graduated from MTSU June 6, 1941, with majors in math and science.

Seven days later, June 13, he enlisted in the Army, just two days after he turned 24.

"I went in because it was time for me to go," he said. "My induction station was Fort Oglethorpe, Ga. They sent me to Fort Sill, Okla., to basic training."
After attending officer candidate school for 14 months at Fort Bragg, N.C., he was commissioned a second lieutenant in March 1942. In the summer of 1944, Willard was shipped overseas and landed in Liverpool, England.

He crossed the English Channel to land on Utah Beach in France on Aug. 9, 1944, two months after D-Day, and remained in active combat until the end of the war in Europe, May 8, 1945.

The first two weeks in France, he and his comrades supervised a POW camp. They went into combat Aug. 25.

"We were heavy artillery. We had 12 guns [howitzers] weighing 15 tons each. The guns fired an 8-inch diameter shell that had a maximum range of 10-and-a-half miles. The shells weighed 200 pounds," said Willard.

Over the next eight months, Willard and the 738th Field Artillery Battalion fought their way across France and Germany and were in Czechoslovakia when the war in Europe ended.

His specific memories of his walk through Buchenwald concentration camp that April morning of 1945 are now but a blur.

"It was just a terrible thing, hard to believe," he says of what he witnessed inside the electrified barbwire fence. "Hitler put to grave 12 million. Six million of those were Jews and six million were civilians, not soldiers but people that disagreed with Hitler."

Of the 600 or so soldiers that he served beside in the 738th, there were about 30 commissioned officers. He states, "All of them are deceased but three: me and a boy who lives in Washington state and one other."

Willard received five battle stars and the Bronze Star for his service. Among his other mementoes of being in the U.S. Army are his stripes as a corporal, second lieutenant, first lieutenant, captain, major and lieutenant colonel.

He had an older brother, Ben Willard, who served in the South Pacific and was captured by the Japanese. Ben was to escape and made his way back to U.S. lines. He died in 1972.

Before Frank Willard left for the European theater, he married Katherine Gower, a Robertson County native he met at MTSU, on Aug. 9, 1942. They have been husband and wife for 75 years and have lived a total of 197 years.

Willard can't remember where they went on their first date, but says, "I had to ask her three times."

He asked her to marry him, he said, after, "I decided I couldn't live without her."

After the war, Willard was a professor of military science and tactics at Eastern Kentucky University for two years. He then took advantage of the G.I. Bill of Rights and decided to enroll in dental school. He entered the University of Tennessee College of Dentistry, Memphis, in 1949 and graduated in 1952 as president and ranking top academically of his class.

"I started practicing dentistry in Clarksville in 1952, and I practiced 34 years. I've been retired 31 years," he said.

Frank and Katherine had three children: Linda, Frank II (deceased) and Jim; and have two grandchildren and two great-grandchildren. His family plans to have a birthday party at his home June 17.

He enjoyed showing Tennessee Walking Horses from the 1960s into the 1990s. Among the horses in his stable were Mr. Peepers, Sun's Midnight Angel, Grits Gala Girl and Doc's Eternal Flame. He showed Angel and Eternal Flame at the Walking Horse Celebration in Shelbyville and has shown his horses in Woodbury. He also had a hobby farm where he raised cattle until about five years ago.

These days, he said he starts out with the morning paper. "The first thing I do is turn to the obituary column to see if I'm there," he joked. "Then I read sports, politics, government." He enjoys television and watches "Tennessee Crossroads," "The Lawrence Welk Show" and the news.

Asked why he thinks he has lived nearly a century, he answered, "I have never been ill, just lucky. I feel good, sleep good. I think a lot of it's in the genes from when you're born."

His motto: Therefore all things whatsoever ye would that men should do to you, do ye even so to them.