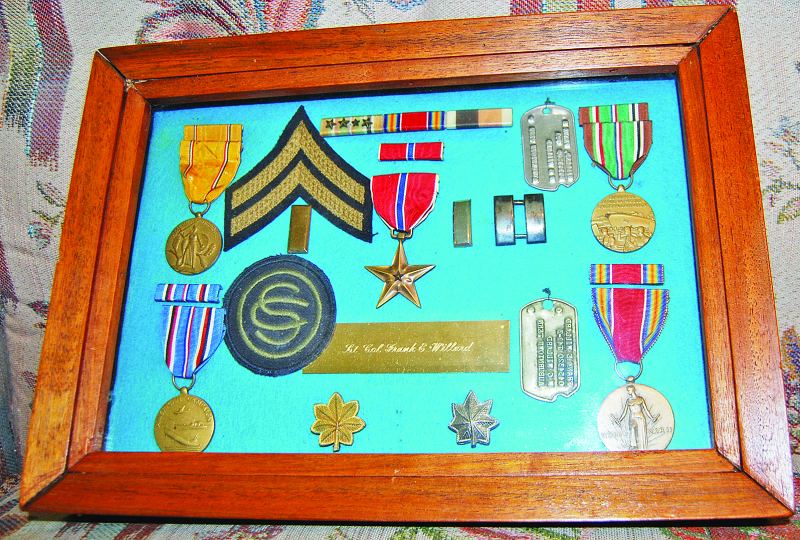 Auburntown native Major Frank E. Willard of the 738th Field Artillery Battalion's penned this article for The Cannon Courier in 1945. This was his account of the Buchenwald concentration camp, which was liberated by American forces at 3:15 p.m. on April 11, 1945. Willard visited the camp the morning of April 22, 1945.

I will tell you what I saw yesterday with my own eyes because I was there in person. It was no propaganda, no unofficial newspaper, radio or magazine reports -- just a plain fact.

On my way home from London, England, I visited, together with two lieutenant colonels, Hitler's Buchenwald concentration camp, which is located about five miles southwest of Weimar, Germany. This has been described by many prisoners as one of the "better" camps.

We were met at the entrance of this camp by one who had formerly been an internee of this camp, a Czech civilian prisoner. He spoke English sparingly, but there was little need for him to speak at all, as each scene spoke for itself. He offered his assistance as a guide. We assured him that we were very appreciative of his service and as our time was limited, to show us only a few of the scenes, and to be brief.

Our guide stated that during the past six years, of 21 nationalities, including British and American, 51,000 had been murdered and one million died a natural death (I found out later what he meant by natural death).

The first place we visited was a basement room of a large building. The room was about 15 feet by 30 feet. Our guide explained that this was the hanging room. Along the top of the walls were about 30 hooks. The victims counted off in groups of 30 and marched in. After the door was closed, each prisoner's hands were tied behind him, a short rope looped around his neck and he was lifted up and hung by the loose end of the rope on the hook, with his back to the wall. After he had hung there about four minutes, if he were not dead a guard took a large club about the size of a baseball bat and finished him up. Below each hook we could observe where victims' fingernails had dug in the concrete as he strangled to death.

After the bodies were taken from the hooks they were placed on an elevator and lifted to the oven room. In this room were six ovens, each oven burned five bodies at a time. The ovens were equipped with coal pits and electric blowers. The bodies were placed on a tray and when the door was pushed in, much of the same manner as our cannoneers open the breech-block and shove the projectile home with the rammer staff.

In one oven was a body which could still be recognized as such because Germans had had to flee before the job was finished. The SS guards motto which was whispered in the ears of every prisoner as he entered the camp was, "You come through the gate and go out through the chimney." I could understand what they meant. We stepped into an adjacent room and there was a large pile of human ashes about four feet in height and about six feet in diameter.

The guide then directed us to the outside of the building where there were two piles of what could still be recognized as human bodies. They were piled into two piles of about 25 bodies each. The bodies were naked and were nothing but skin and bones. These people had been starved and killed. The Germans did not have time to burn the bodies before the Americans came.

The guide remarked, "These are my comrades." I had seen pictures of such things but only thought it was propaganda. A lieutenant colonel looked at me and said, "My God, Major, that's not propaganda." I started to snap a picture but I could not help turning away and cursing a people who would live in a land and allow such practices to exist. Even I was disgusted at myself for not believing what I had read and heard. It was hard for me to believe what appeared before my very eyes. How could anyone be so inhuman? The other lieutenant colonel remarked, "Why the --- barbaric ---, Hell, I want to get back to the front."

We next visited the commandant's house, which was located in the center of the camp. Here we saw a room of tattoos of human skin preserved in alcohol. We saw a lamp shade made of a piece of human tattooed skin stretched over a wire. The guide told us that the souvenirs of human skin was a hobby of the commandant's wife. These had been cut off the bodies that had been murdered. The next place we visited was the sterilization room, a room through which all the prisoners passed when first entering the camp.

We next visited one of the barracks where the prisoners slept. I saw one building about 35 feet by 200 feet. In this building slept 250 prisoners. I immediately questioned what seemed to me a physical impossibility. The guide explained -- along either side of the room were rows of shelves, made into compartments about four feet wide, six feet long and 20 inches high. In each one of these compartments slept six persons. The only cover of any kind except bare boards were two blankets.

Next we visited a building which the guide referred to as the hospital. This building was similar to the other barracks, except in the bottom of each compartment was a dirty straw mat. The hospital was no less crowded than the barracks and stank with filth. No human being could have lived long in this place had he not been ill. We looked over a very thick book, which was a register of patients. Each patient's name who had died was indicated by a red cross mark; I would estimate 95 percent of the names were so indicated. The guide told us that during the past year, 6,400 patients had died in January and 8,500 in February.

The guide told us that at the time the Americans liberated the camp that there were about 60,000 prisoners there. The German SS troops had planned to kill the entire camp, but the Americans arrived about 12 hours earlier than was expected. The food each prisoner consumed each day consisted of one bowl of soup and a small piece of bread. In this manner murder could be covered up by making it appear that the people died a natural death. How long would it take to die a natural death under such conditions?

I asked the guide what he thought should be done to punish the Germans, he replied, "Just like they have done to us." The German prisoners including SS troops that I have heard interrogated all talk and act alike. They all say they were "forced into it." They all say they haven't done a thing. Those who had charge of this camp, when captured, will say the same. We, the American people, do not believe in any punishment that is adequate for those who are responsible for these crimes. We will never stoop that low.

What I have seen the past two months has made my heart bleed and say many times, "Thank God I'm an American, and thank God Hitler never got to America." As the war nears an end, let us hope that our great leaders, among other things, will plan such a peace that will prevent the mass murder of innocent people from occurring again.

My eyes have been opened. It's great to be an American.