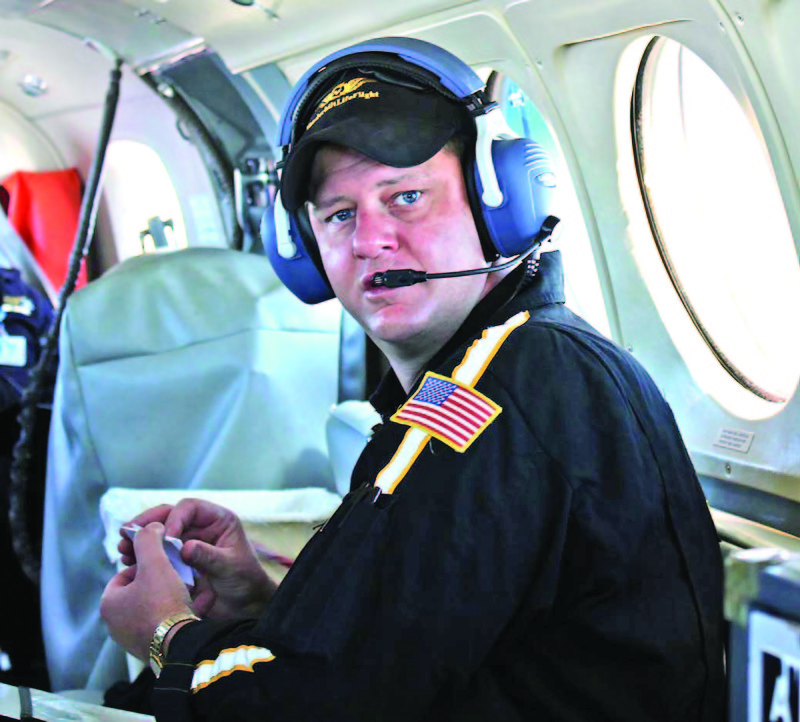 Tim Bell has served for 10 years as a Vanderbilt LifeFlight paramedic/respiratory therapist. He says, "I truly feel like this is what I've been called to do." Bell most often flies from a remote base in Tullahoma, one of six LifeFlight bases in Middle Ten

Tim Bell would be the last to take credit, but, truth be told, he and his comrades are life savers.

Swooping to the scene of an emergency, Bell and his medical partner hop down from their big metal bird. The whirring metal blades overhead might by noisy, but for those in a world of hurt must sound like the wings of angels.

Bell serves as a flight paramedic/respiratory therapist with Vanderbilt LifeFlight. Typically, he arrives on the scene with a nurse and the pilot.

"I enjoy critical-care medicine. It's about taking care of people. I truly feel like this is what I've been called to do," Bell says frankly.

"I've seen more than any one human ought to but so has everybody else that works emergencies. I'm not anyone special," he said. "We try everything in the world for death not to occur, but some patient's injuries are just too serious."

The majority of LifeFlight's trauma patients are victims of motor vehicle collisions, but Bell and his teammates also handle strokes and heart attacks and provide critical-care transport.

Employed by LifeFlight for 10 years, Bell is considered the team's resident expert and teacher on airway issues. In 2012, he was honored by his colleagues as the recipient of the Medical Crew Excellence Award for his "demonstration of the highest level of patient care in a safe manner."

The 1992 graduate of Cannon County High said the seed of his desire to help hurting people was planted when he was 16 years old.

"I was hauling hay, and a neighbor had a seizure. I didn't even know what a seizure was. I remember Ricky Cope, who is the Woodbury ambulance service driver, came out there and just handled that situation. I thought, 'That's amazing. He's not breaking a sweat, and he's got it under control. This guy's made out of steel.' That's pretty much what it all goes back to. I knew that was what I wanted to do."

Raised by his grandparents, Luther and Racine Mooneyham, on a small farm southeast of Woodbury, Bell enlisted with the Cannon County Rescue Squad and county fire department his senior year in high school.

It was during his junior year in high school that Bell took a job at the Woodbury Nursing Home and came under the positive influences of Betty Reed, the director of nurses, and Helen Davenport, who worked in the office.

"I worked there in laundry for two weeks, and I didn't see that as a career path, and Betty changed me to nursing. The ambulance service was on High Street near the nursing home. Betty was trying to encourage me to go to nursing school, but every time an ambulance went by, it got me to thinking that was what I wanted to do," Bell recalled.

He soon found employment with the Cannon County Ambulance Service, where he worked full time from 1993 to 1999. He also worked at Stones River Hospital while he attended EMT and paramedic school.

"I started flying in 1997 on air medical on a fixed wing [airplane] and flew many places across the U.S., Canada, the Bahamas and Mexico. I've probably been in 43 or 44 states transporting patients," said Bell, who became a critical-care paramedic and respiratory therapist in 1998. A year later he began flying on helicopters.

Other than an 18-month stint with Erlanger Hospital in Chattanooga, he's flown with LifeFlight since 2005.

"In 1997, when they put in LifeFlight 2, they started substations all around. Now we've got six bases and are opening a seventh in Cookeville and have an airplane base. The airplane base is much more critical-care transportation of patients from other large hospitals to Vanderbilt to receive specialty care," he added.

Most of the time Bell works from the Tullahoma base, which has a core group of about 10 nurses and paramedics. Occasionally he will work on the airplane, which is based at Nashville International Airport.

His work schedule fluctuates between 24- and 12-hour shifts. On an average day, he may make two to three flights, but some days there may be none or as many as six or seven.

The three helipads at Vanderbilt receive about 8,000 helicopters a year from a variety of providers. The helicopter division transports around 3,000 patients a year. Aboard each LifeFlight copter will be the pilot, a registered nurse and a paramedic.

Bell estimated that his missions of mercy transport 80 percent of their trauma cases to Vanderbilt and about 20 percent to Erlanger. Once the Cookeville base is in operation, there will be some transports to Knoxville Hospital & Clinics.

Each helicopter base occupies a hangar at the airport. Crew members are not simply sitting around waiting but spend hours in medical and aviation training, much of that done on the Internet.

The medical workers collaborate with the pilot, who has the final decision whether to make the flight or not. (Pilots are employed by Air Methods.)

Once a dispatch center receives an emergency call, the pilot is informed by radio. The pilot looks at the weather, calculates the distance and fuel load and studies the patient info and then decides if they should fly. One of the biggest reasons a pilot may decline a flight is nasty weather. Poor flying conditions prevent LifeFlight from making about 1,500 flights a year.

The copter flies to the distress scene at 1,500 to 2,500 feet above the ground. If leaving from the Tullahoma base it typically takes 15 to 20 minutes to reach the Woodbury area and then about 25 minutes to