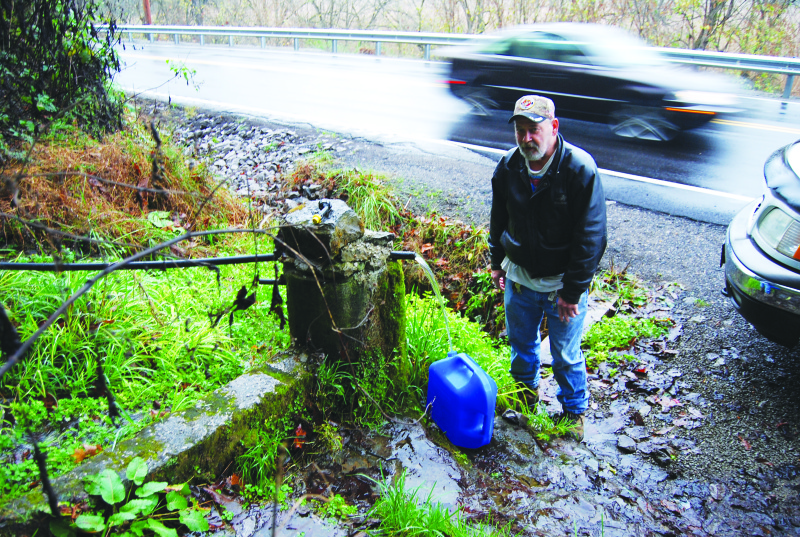 Jessie Goss of Gassaway has been fetching his drinking water from River Spring on Highway 53 near Woodbury for the past 10 years. He describes it as good, wet and cold, and says, "I think it tastes better than city water." Goss, who fills a five-gallon co

Americans drank more than 10.7 billion gallons of bottled water in 2014, but in Cannon County hundreds prefer to quench their thirst with the cool, clear liquid flowing from River Spring.

The H2O from this spring, which rushes from the mouth of a cave near a dangerous curve along Highway 53 about a mile from Woodbury, serves as a free gift from Mother Nature.

According to the opinions of some who fetch their water from the site, also known as River Road Spring, this is some of the finest drinking water on Earth.
The number of those who imbibe water straight from the ground is legion. Half a million or 10 percent of Tennesseans get their drinking water from springs and private wells.

"There's a lot of people that use this place. I been coming here since 2005," says Jessie Goss of Gassaway, who makes the 14-mile round trip once a week to fill a five-gallon plastic container.

A pipe catches the water at the front of the cave and carries it about 28 feet toward the highway. It gushes out at the other end three feet above the ground like an ever-flowing water fountain.

Goss places his big blue water jug on the ground so that spring water arcs into the silver-dollar-sized opening on top. After three minutes or so, Goss's container runs over. He moves it away.

The water arch splashes to earth. Aided by gravity, it travels a few feet, drops into a ditch before it disappears into a man-made cave, a metal culvert that transports it beneath the highway to the opposite side of the road where it spills seven feet to a rocky landing, before it gets swallowed up by the East Fork of Stones River.
"Where I live at there's not any city water. I get my water from an underground stream," said Goss, who utilizes a gravity-fed system that sends his water running into a cattle trough. "I take baths and wash my clothes with that water but don't use it for drinking."

This water that he will tote home takes care of his drinking needs for a week.

"It tastes good and wet. That's about it. It's cold," he adds. "I think it tastes better than city water."

Goss estimates that around 100 people collect water here every week, but no one really knows how many folks visit the spring.

"People who have sulphur water and stuff like that come get their water for drinking here," said Goss.

Folks from outside the county also favor this spring water. Aaron and Lisa Wadzinski of Murfreesboro have been coming for three years to collect these waters for drinking as well as for making homebrew beer. They typically leave with 60 to 70 gallons in five-gallon jugs.

"There is a geo-cache there. That's how I found out about it in the first place," said Aaron, a network support engineer. "We found it a couple of years ago on our way to a geo-caching event nearby.

"I grew up in Indiana on well water, so I was used to water not been messed with by the city and all that chlorine and stuff," said the South Bend, Ind., native. "This water tastes great, so we no longer buy bottled water at Walmart."

As for using it to brew beer he says, "It's nice to have natural water to use. When you boil the beer you boil off the chlorine, but you still get a different water profile as there are different types of hardness. Ninety-eight percent of beer is water so it can make a significant different in how beer in the end turns out.
"The limestone probably gives a little bit more flavor of the minerals. It comes out pretty good, and I can say my beer is brewed with fresh spring water," said Aaron, who said they motor over about once a month, "depending on how much I'm brewing and how much we're drinking."
Lisa, who describes flavor of the water as "awesome," said, "We've drunk hundreds of gallons of the stuff, and we're a family of five people and had no ill effects."
Meanwhile, a blogger who goes by Caverdon, wrote last year on a Tennessee geo-cache web site, "I've been familiar with this spring and cave for a long time. Not much to it, but it always gets attention on a drive­-by. BTW DO NOT DRINK THIS WATER without purifying it first. I've caved a lot in this area, and we've tested the water in these caves. It has very high bacterial content, mainly because of the cattle in the area and the runoff goes down into the cave. People think it's pure . . . but it's not."

In response to a request for a statement from "The Courier," the Tennessee Department of Environment and Conservation noted, "TDEC is not aware of any water quality data that exists for the particular spring you are questioning. However, it is not uncommon to find elevated levels of bacteria, including E-coli, in ground water springs in Tennessee. Roadside water springs are generally not protected from contamination and are not routinely tested. TDEC recommends that no one use roadside springs or other untreated water sources for drinking water."

"It's been there as long I can remember, and people have been using it all that time," reflected Brady George, 93, of Gassaway, who has not had a sip of the spring water in a couple of decades. "As far as I can remember the water was always good and cool."

"That's where we used to get our water when I was a young kid," said Col. James Stone, who noted that his folks always called it the River Road Spring.

"When I was a kid it was a tradition on Saturday that there was no work. Everybody got cleaned up and went to town in the back of a mule-drawn wagon. We had chairs in the back for the ladies to sit in. We'd come past the spring, and we'd always stop, and I'd get all the ladies a drink of water. I did the same thing on the way back home.

"A lot of people even today get their drinking water there [at River Road Spring]. And a lot of Short Mountain people still get their water up at another spring, what they call that head of the Stones River.

"It's been a year or so ago that I stopped there telling the story to my grandson, and we got a drink. Even back then in 1940s the health people told us the water was not really good to drink. We didn't pay no attention to it," said Stone, noting that in those days everybody had a well on their farm.

Polly Dowdell of Gassaway fills three or four empty milk jugs with the spring water three times a week and speaks succinctly saying, "It's the best water there is."

Another true believer in the sweet taste of this spring water is Aubrey Barlow, who lives in the Sycamore Creek community. He has been coming to the spring for seven years and gets three or four gallons a week.

"Everybody gets water here. Lots and lots of people do," said Barlow, who shares a sulphur water well with three other families. "I can wash clothes and dishes in sulphur water but don't want to drink it. I like spring water. It's good and cold."

Cannon County's Sharon Smith and her sister drop by the spring at least one day a week to fill 60 one-gallon jugs with the water.

"We started coming here after the electric company sprayed around our springhouse over five years ago. The pump is frozen up now. Before then we used to stop even for the fun of it to get some good spring water," said Smith.

"Today's a good day for getting it," she noted as the water gushed from the end of the pipe. "When there is good weather like this, I can hardly keep up with it (placing the jugs beneath the pipe and swapping them out). It's good exercise."

It takes but 20 seconds to fill an empty one-gallon plastic milk container. On days when the water pressure is slower, it may take three minutes to fill.

"The water tastes good. The city water tastes like bleach. We use it for drinking, cooking, washing clothes, watering dogs and cats and flowers. We use it for anything we need it for," she said. "When the pump gets fixed, we'll probably still come here because the water is great."

Smith said there were occasions when objects blocked the flow of water at the opposite end of the pipe. She walks the slippery slope up to the mouth of the cave to clear it. Normally, the pipe is dammed by rocks but once it was a crayfish. And there was a time when she returned home to discover a salamander in bottom of the water jug.

"Without a doubt that crayfish was the aptly named cavespring crayfish (Cambarus tenebrosus) that dominates the spring run," said natural heritage zoologist David Withers of this site that cavers have officially named Highway Spring Cave. "This species has eyes and can live in springs, cold surface waters and deep into cave environments. This is the crayfish that typically greets cavers in middle Tennessee's wet caves. They can get quite large at times and may live a long time it seems."

For those who have may not know this stretch of pavement that winds around Highway 53, note there is road cut with room for only one vehicle to park near the spring, and it proves a precarious predicament as cars fly around the road.

The section of highway around the spring, says former Cannon County Sheriff Robert Bogle, "has been dangerous for years."

Bogle, the county's top lawman from 1978 to 1986, said, "I've traveled that road 50 or 60 years or more and don't recall any accident there at the spring, but I've seen a lot of wrecks on the curve just beyond the spring. That curve is dangerous."

Still, it is likely that a hundred or more thirsty souls visit the spring each week so they may partake of the precious liquid.

Jessie Goss normally brings his dogs, Aries and Skippy, with him on the water collection run, but he does not let them out of his car nor does not share his beloved spring water with his canine pals.

"I don't give my good water away," said the Cannon Countian, who takes delight in sipping water from this fresh water spring that seems to flow eternal.