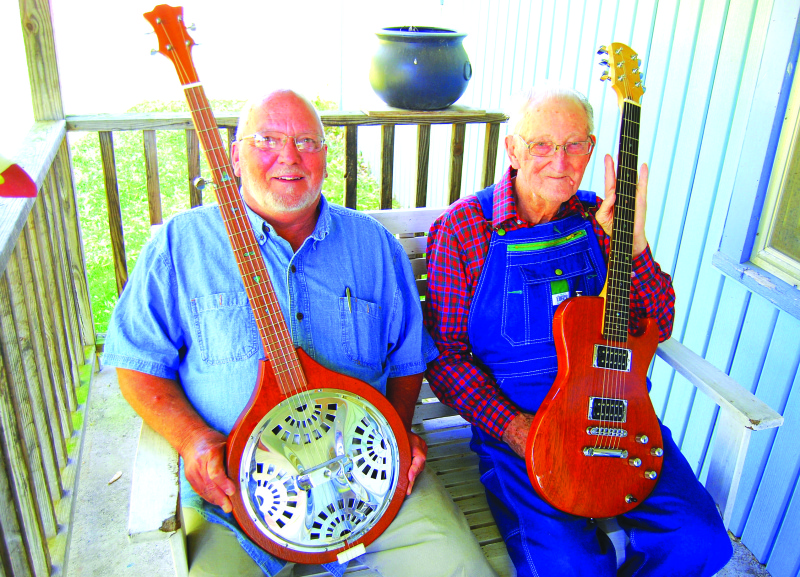 Take a father who knows his way around a wood shop and a son who knows a bit about guitars. Add a dash of creativity. Pour in many an hour of sweat equity, and, well, you've got some mighty splendiferous musical instruments crafted straight from the heart of Cannon County.

A short time after Woodbury woodworker Howard Reed lost his wife Eva in 2001, he turned to his son Bobby and said, "I've got to stay busy and be doing something. I don't want to do heavy furniture or cabinets. How about making a guitar?"
Bobby promptly responded, "We can do that."

Howard, 88, has been producing beautiful cabinets and furniture since he was a teenager, and Bobby, 64, has been picking a guitar since The Beatles first hit the States in 1964.

"Dad bought me a guitar when I was in the seventh grade from the pawn shop for $32. Bernice Spry taught me how to play. It cost $1 a lesson. Ever since then I wondered if I could make a guitar that would fit me," said Bobby, who teaches welding at Tennessee College of Applied Technology in Murfreesboro.
"What we discovered doing this is that you do not have to be an experienced luthier to build a musical instrument," said Bobby. "He knows a lot about wood, and I know a little bit about music."

From scratch the father and son tandem have turned out four guitars, two lap steel guitars, a banjo and a hammered dulcimer. The sound from the electrified instruments is sweet indeed, but the detailed wood work transforms them into pieces of fine art.

Before they made these eight, the duo put together several instruments from kits, one of those being a mountain banjo with goatskin used for the head.
"I done things like that because it had a challenge to it," says Howard. "Patience, that's the name of the game. If you ain't got no patience, you ain't got no business woodworking."

The first guitar they crafted after a Gibson Les Paul guitar, using mahogany for the body, maple for the neck and rosewood for the fret board on the neck.
Bobby said, "I have a Fender Stratocaster that I bought. At the time I didn't want to gear it down to get the dimensions, so I bought two kits. I took the kits and got the dimensions and patterned my own after the Les Paul to suit me.

"I gave the dimensions to Daddy, and he'd take a solid block and cut it out. He'd take a router and cut out the pickup pockets. He cut out pocket for the electronics. I come along and wire it up and solder it in. Then he cut me out a neck, and I carved the neck with a gouger. I'm partial to maple because of the vibrations."

Noted his father, "That's fairly hard wood. I like cherry and walnut pretty good. You take a wood that's softer, it has a mellow sound. The hardwood rings more."

Their third guitar was patterned after a Paul Reed Smith instrument (Smith is a master guitar maker whose instruments are popular among the rock guitarists, including Carlos Santana, Ted Nugent and Jimmy Buffett), with a body made of poplar, neck made from mahogany with a rosewood fret board, inlaid abalone shell on the head stock and knobs from osage orange.

"This guitar was an experiment that turned out great, at least to my ear," said Bobby. "I changed the dimensions slightly. Me and Daddy went a step further and hollowed out about 40 percent of the body to see how the sound changed. Any change made to the wood changes the tone. The sound is great and has a more mellow sound."

As for their handsome, mahogany five-stringed banjo, Bobby said, "This is cover off a dobro from a kit. Daddy put it together instead of using a banjo head. I'm using the cover and metal bridge that I made from scale. I inlaid it with abalone shell. It turned out really good."

"What you're seeing ranges from 2001 to now, 2016," said Bobby of their magnificent eight instruments.

Howard grew up on a farm with his parents and his brother Ralph on Hollis Creek in the Sunny Slope community.

"I went to high school but had to quit because my father got sick and my mother had to attend to him, so I went to work," said the octogenarian. "My first job was a handyman: hand 'em this and hand 'em that."

As a teenager he helped Lee Powell build a house on College Street, and he picked up some pointers around the wood shop of his uncles Robert and Tom Rogers. For a little while he was the telephone operator in Readyville, and then he found his niche working for R. Sloan Cabinet Shop and with Haynes Brothers Furniture and Lumber Company in Murfreesboro, where he labored 30 years.

After he retired from working in the Boro, Howard and his brother Ralph tackled a major project in creating the magnificent arched windows in the Woodbury Church of Christ auditorium.