Southern route may be way to go 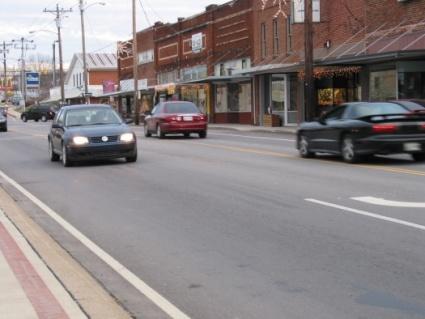 Officials in Woodbury and Cannon County think the southern route just might be the way to go when it comes to completing state Route 70's connection to Warren County.

When complete, the roadway will link Woodbury to McMinnville with a four-lane highway. A four-lane, the John Bragg Highway, already connects Murfreesboro and Woodbury.

The first two sections of the three-part project are currently under construction. The route of the third and final part remains undecided.

Three alternatives have been suggested. One follows the current road through downtown Woodbury. The second path goes north of town and near Stones River Hospital. The third path travels south near Houston Hills subdivision connecting into state Route 53 near Cannon Market.

"Federal stimulus funds have been used to speed up the project," said County Executive Mike Gannon. "But it still will be December 2014 before they open it up.

"We need our legislators to push for the money," Gannon said, but before that a decision must be made on the route.

Gannon said he has no preference on the routes, but says the southern plan may make the most sense.

"Woodbury needs a direct connection to Interstate 24 and this southern route could eventually do that," the county executive said.

"In so far as the northern route or the southern route, I don't care," Patrick said. "I'm going to be Mr. Flexible. My concern is that we don't leave it like it is. From a personal standpoint, let's get together and get it done."

Both Gannon and Patrick were recently approached by state Rep. Mark Pody about the project and the need for local input on that final route.

"I didn't realize that it was so controversial," Patrick said.

The dispute comes from merchants located in downtown Woodbury. These businesses fear the loss of customers if the Square is bypassed.

But the project might boil down to which route costs the less, Patrick said. "One thing you have to consider is if you go north or south and even through town, which is the least expensive."

Reaching a consensus could prove to be difficult, both officials said.

Rep. Pody suggested that a public referendum could be the clearest option. But both Gannon and Patrick agreed a public vote could delay the project even further.

"I think we can put something together," Patrick said.

The Woodbury mayor intends to begin discussion of the issue with Board of Aldermen members. Then take the measure to the full board for a vote. "It's going to be a tough call."

Rep. Pody said the state might consider a two-thirds majority vote in favor of one of the plans sufficient proof, but it will take that from the Town of Woodbury and the Cannon County Commission.

Print
Members Opinions:
sinkhole1959
[Delete]
The problem with a public referendum is that this will only pull in peoples votes on personal preferences. They will vote to keep it as far away from their property as they can. The bypass route is going to take place and a purely logical and beneficial route needs to be picked. None of the options will be the best for businesses in the square but if they make it as easy as possible to exit and re-enter the 4-lane bypass that will be the best solution for the town and if the road and access points are too far from the highway to the town it will deter people taking time to exit for gas or food or other items. Local traffic like my usual Saturday trips to take off the trash or go by Co-op or the hardware store will not be affected anyway, since the town "is" my final destination. The bypass will only reduce pass through driving and truck traffic. But there will be a loss of some business no matter what route is picked.
Going through town is probably the most detrimental to the businesses because the only way it would fit would be to level one entire side of the square of all shops.
redmolly
[Delete]
A new road anew business will open. Some will suceed others may not. Some folks will take that chance. Change is good.