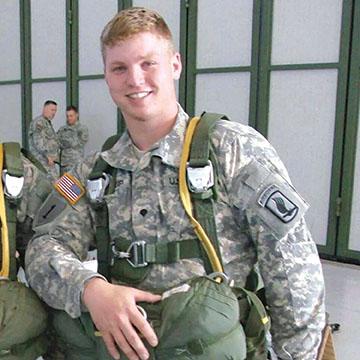 Franz Walkup, seriously wounded in Afghanistan, is reaching out via crowd-funding to earn money for a handicapped accessible home in Woodbury.

Walkup has undergone 78 surgeries and countless hours of rehab at Walter Reed Hospital in Washington, D.C. after being shot five times by coalition Afghan soldiers during a patrol through the Taliban-controlled Tangi Valley on Sept. 29, 2012.

When Franz and his wife Shannon applied for financial help to build a handicapped accessible home, the couple was rejected by at least five organizations.

"They act like getting shot five times wasn't enough. Because he didn't step on an IED. You didn't lose extremities," said Shannon Walkup.

Now the young couple is reaching out to the public through GOFUNDME, a fund-raising Internet web site and began a campaign to raise $50,000 for their "forever home," which has generated more than $25,817 in donations from 357 people in 11 days.

The news media is beginning to share Walkup's story, which was initially broadcast by WUSA in Washington, D.C.
"It's hard because it kind of feels like my sacrifice wasn't great enough," Walkup told WUSA.
Since then, other major media outlets like the New York Daily News and The Huffington Post have picked up Walkup's cause.

Walkup, a sergeant in the U.S. Army's 2nd Battalion, 503rd Infantry Regiment suffered a shattered right pelvis, damage to the spleen and large intestine and lost function in his right leg below the knee after being shot in the stomach, back and leg.

Tireless rehab allowed Walkup to walk using one crutch by March. He picked up hand cycling not long after. But the soldier is still handicapped. The couple, who now live in Gaithersburg, Md., hopes to relocate to a house with doors wide enough for a wheelchair in Woodbury.

Franz has still got both of his legs, but one of them doesn't work.

"I fit into that gray area where I have the loss of the limb, but I still have my limb," he explained.
His body is a roadmap of his injuries. A shattered pelvis, a broken leg. He lost his spleen and most of his small and large intestines.

"It's not just me that served and sacrificed," said Franz, proud to come from a military family - one of four brothers to serve. His older brother, Frank, was killed in Iraq by a roadside bomb in 2007, three days before his 24th birthday.

"I just need a little three-bedroom house with 36-inch doors so I can fit a wheelchair through," he said.

Despite all they've been through, Franz and Shannon don't begrudge the wounded warriors who get priority - double and triple amputees and those with traumatic brain injuries.The Walkups have applied for a grant from the Veterans Administration that could cover some of their costs, but they've been told there's an extraordinary backlog.

"Franz has never given up and continues to strive for the future with his wife and two dogs," the couple posted on GoFundMe. "After being turned down by many home building organizations being told he's not wounded enough, Franz is taking it in his own hands to make his dreams come true."

If you'd like to help, a GoFundMe account has been set up in Franz' name. To view his story go to, www.gofundme.com/gz465g