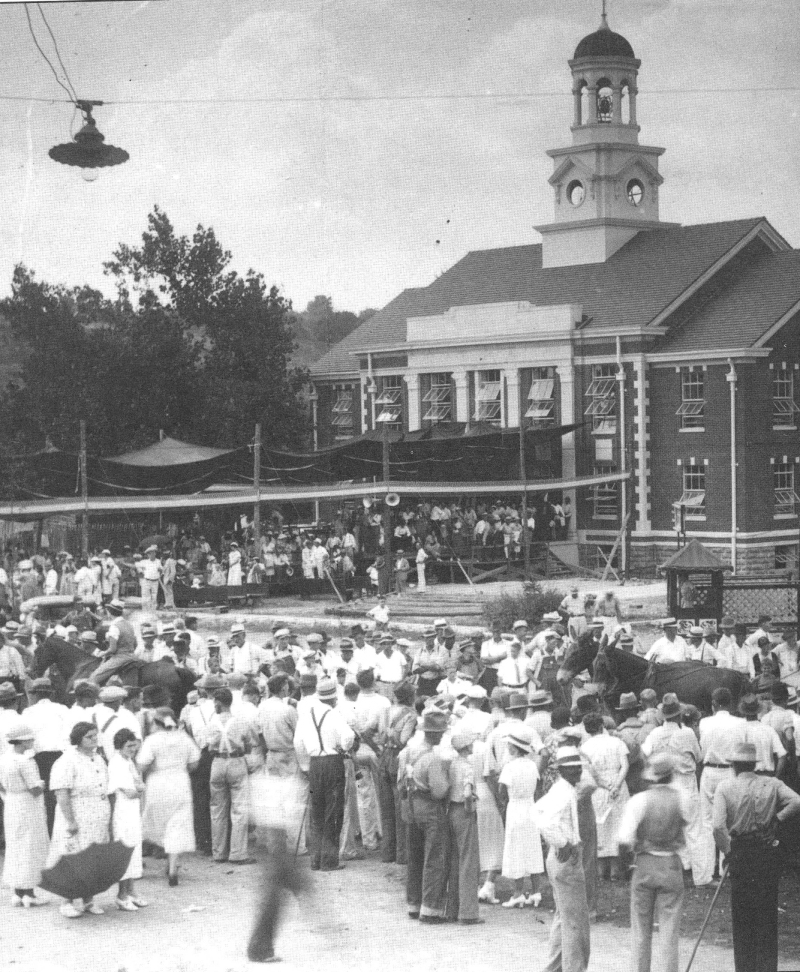 The decade of the 1930s--truly remarkable years for an emerging rural hamlet that was beginning to look upon itself as a "boom" town. Aid from federal, state and local government coupled with the willingness and determination of a hard-working people, a town called Woodbury made it through and even progressed under the worse economic Depression that had gripped the nation in generations.

Citizens of the County were encouraged by this progress through the course of that decade and celebrated the first one hundred years of existence as a county in 1936, hosting activities that centered around the town square. This three-day event feat-ured such speakers as Dr. Walter D. Cocking, state commissioner of education and Dr. W. F. Powell, pastor of the First Baptist Church at Nashville. Also, Nash­ville Judge John H. Dewitt, president of the Tennessee Historical Society, spoke on the life of Levi P. Woodbury -- who the town was named after.

A historical parade theme highlighted events with actual floats depicting scenes of historical significance concerning first settlers, Revolutionary War Soldiers and the importance of the "Stage Coach Road"as it slowly evolved into what was called the Broadway of America Highway. The floats were sponsored by various mer­chants including entries by the local Cheese Plant as well as the new hospital.

A new two-story brick (Good Samaritan) Hospital, Courthouse and High School dotted a mural landscape and pointed to a more progressive minded attitude that was energizing growth setting the stage for a more prosperous business com­munity. Efforts were made to beautify the center of town. By the end of the decade workers had "covered-over" an unsightly wet weather spring. A number of new store front buildings such as the Smoot building added to the existing brick struc­tures to set-off the town square as a potential center for business opportunities.

The "Broadway of America Highway" alone had brought many changes by by closing tollgates and outlawing turnpikes throughout the county. Automobile repair shops along with cafes sprang up in the town almost overnight. Gasoline became available countywide by the end of the decade. The Standard Oil Company thro­ugh "long term lease agreements" partnered with local store-house owners invested in gasoline pumps and underground storage tanks in places such as Bradyville, Mec­hanicsville, Readyville and Woodbury.

A "out of town weather pilot" routinely visited the Short Mountain community flying an observation aircraft regularly nearby the mountain to better understand weather pat-terns there. The flights began in the early morning hours, taking off at the new "Sky Harbor" Airport at Murfreesboro.
The roar of an airplane engine created excitement about the town as citizens awakened to a new day. Many looked skyward and listened as the pilot buzzed the town at low altitudes. The pilot's mission-to observe and chart weather conditions while reporting the findings to a weather station at the Murfreesboro airport.

Heavy, low lying clouds shrouded the mountain during one early morning fly­by--visibility was almost zero. As the aircraft passed over Woodbury and fain-ted into the distance it suddenly stalled. The pilot had taken an unusually big risk that morning in the dense fog. He miscalculated the aircraft's distance from the bluffs and flew too close to some rock outcroppings. The small aircraft came crashing down. Several hours passed before any one could even reach the wreckage site-­tragically, the pilot did not survive the crash.

By the decade of the 1930s a more rapid communication system had been established in the town and bad branched- out to include other small villages in the county. At least six locally owned telephone switchboards were linking the county in such a fashion no one could ever have imagined decades before doctors could now be summoned within short notice.

The new Highway 53 from Liberty running south over Cannon county's most prominent ridgeline now coursed its way through Woodbury and on to Manchester.

This new roadway, along with the Broadway of America Highway, had at last, opened up an "isolated county." Local entrepreneurs began to explore opportunities unforeseen before.

Access roads onto these 'Highways' created a network of secondary roads that linked the county together for the very first time in its history. It gave the county a whole new sense of identity and pride. A young lawyer and legislator named Jim Cummings was continually finding funds at the state's capital to build and improve roadways in his home county. Along this new "Broadway of America Highway" places called Leoni, Braxton and Midway, emerged as communities.

These improved and more up to date graded and graveled roads certainly focused in on a new direction for a country town since the beginning had only been known as the seat of Justice for the county; for generations county officials had designated Mondays as a market day. Now a mixture of "tin -lizzies,"buggies and raddling wagons created a business atmosphere in and around the town almost daily. Some local establishments near and around the square were Jenning's Garage, Norvell's Garage, the Armstrong Store, Fine's Department Store, Com­merce Union Bank, Baker Drug Co. along with the well known eating establish­ments such as City Cafe and Moore's Cafe.

The early 1920s witnessed untold prosperity for stockholders who invested in banking institutions throughout Cannon County. Before the Depression there had been as many as eight chartered banks-some offering four per cent on savings. The Cannon County Banking company merged with the Union State Bank at Bradyville in 1928. It was the first locally owned banking institution to operate a branch bank in the county before the Depression closed both of these establishments.

These new roadways even created opportunities for "undesirables" that drifted in and out of town. Someone had even started a rumor that a notorious gangster of national fame had stopped in and ate at a local cafe. Other rumors spread about known robbers that had terrified small towns and banks across the United States.

Then, the most unexpected did indeed happen! It even caught everyone by surprise. The Melton's Bank at Gassaway- "held-up at gunpoint!" The robbers fled the scene in a getaway car. The cashier was able to fire his pistol at the fleeing bandits as they sped across the Clear Fork bridge onto the main highway. The bank robbers had made their escape over a much improved Highway 53. They had taken a large sum of money. The cashier was heard to say "the bank's money is insured!!"

Dr. J. F. Adams, born and reared in Cannon county, also was instrumental in· bringing progress to.Woodbury throughout the 1930s with the completion of the most modern hospital and surgical room for the times in such a small town. For a time this facility took center stage in the community. Dr. Adams also enticed the Armour Cheese Co. to locate a plant at Woodbury. A cheese processing plant where local farmers could sell their raw milk. Unable to obtain a loan from the local bank to fund this enterprise Dr. Adams drove to Murfreesboro and was immediately granted a loan.

A new enterprise grew out of the establishment of this cheese plant-using heavy metal containers or "cans" to haul the milk in, trucks established networks of routes across the county transporting a farmer's raw milk on regular schedules. Milk truck drivers traveled over the most rugged terrain in the county to reach isolated farms. A monthly milk check became a source of income that farm families depended upon.

Dr. Adams also saw an opportunity for Woodbury to have its own local entertainment. He opened up the first theater in Woodbury called the "Ritz." It had a stage in the beginning where live shows could be performed. It was only later that the city of Woodbury allowed movie reels to be shown on Sunday afternoons. Some of Woodbury's finest citizens were seen out and about in buggies and model T's.

With the building of these new roadways the county looked to the future and saw the advantages of having its own rock crusher for processing gravel. Since "cre­ek gravel" began to be in short supply there was plenty of limestone in the area to make this much needed gravel. The county readily moved on a motion by it officials to buy it's own rock crusher. With a ready supply of limestone gravel, the county could resurface roads and repair potholes that seen to pop-up after every rain-storm. Automobiles had indeed brought a new level of prosperity to the town -- however it brought unforeseen limitations -- it was dust!

Traffic had increased around the public square and along the new highways to such a level floating dust particles were limiting motorist's visibility. Traffic accidents, injuries and fatalities were on the increase.

During dry weather months heavy dust clouds formed over the town. Hearing about the severity of huge dust clouds and storms that formed in the western states Woodbury got nicknamed the 'Dust Bowl' Town. Automobiles were kicking up so much dust it became a hazard to one's health. This dust laden town sent residents to the local doctors complaining of breathing problems and other chest ailments. Mer­chants complained of having to sweep their stores again and again. Many proposed that local government 'float a bond' and 'oil the streets'. Visibility was practically zero on the Woodbury to Manchester highway; Night travel was next to impossible.

It was not long after many farmers began to see a great benefit from these dusty roads. The limestone dust that had settled on pasturelands next to the new Manchester Highway were a much more darker green than surrounding areas. These coatings of limestone dust that blew off the highway actually was enriching what had been traditionally viewed as the poorest and most unproductive soils in the county. Some farmers bought truckloads of limestone dust to spread over their pastures and fields. They grew bumper crops of hay. More and more of the lands in the tablelands, known then as the Barrens were drained of excess water and low swampy areas cleared away for crop production.

Eventually the streets around the public square did get a coating of oil. Bigger and better trucks were now traveling over a much improved Broadway of America and Manchester Highway. Trucks were bringing new and more innovative products into what some called a "hermit" community; it raised people's 'standard of living'. Transport trucks transformed Woodbury. These improved roadways brought other new industries into the county. The continuous expansion of a shirt manufacturing Industry-- Colonial Shirt Factory-- Woodbury became, by the early 1950's a town of prosperity.