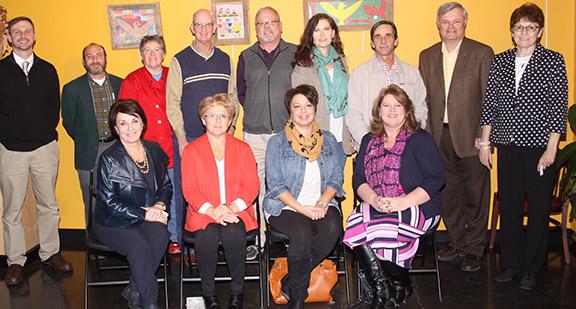 "Cannon County Chamber of Commerce is continuing to grow its membership while pushing a renewed interest in the future," said Ron Fryar, 2015 Chamber President.

Fryar, owner of the Cannon Courier, made his comments Thursday, Jan. 22 during an unique joint Annual Meeting of the Chamber and the Cannon County Industrial Development Board. The meeting replaced a traditional banquet with a less formal event featuring finger foods and conversation between members of the two groups.

"We are a small community and our Chamber has now slowly grown from 85 members to now 91," Fryar said.

"I don't think people know how active the Chamber of Commerce is in our community," said Carolyn Motley, Chamber Coordinator.

"People outside of Cannon County don't realize how diverse life and business are here, Fryar said. This is why the Chamber embarked in 2014 on a new publicity campaign based around the idea Cannon County "is more than you expect."

The first step in this campaign was an upgrade of the Chamber's website http://cannontn.com/ to emphasize a number of Cannon's major attractions including all the antique stores, the Arts Center, Short Mountain Distillery, Blue Porch Cafe, Goodness Gracious at the Mill and the Moonlite Drive-In theater.

"What we are attempting to do is bring a focus on Cannon County with a marketing plan that reaches outside the county," Fryar said.

"We've started phase one of the plan to bring awareness to Cannon County," explained Travis Swann of the marketing firm of Adams, Mabry and Swann in Murfreesboro. Phase two will begin this spring. The marketing program includes videos shot by DTC for distribution throughout the region.

A number of Cannon County businesses are gearing up for spring as well including Short Mountain Distillery.

"We're getting people fired up about coming to Cannon County," said Billy Kaufman, distillery president. Some of that is geared around completion of the new Stillhouse Restaurant, which is scheduled to open in March. Completion of the restaurant will attract major tour groups including Grayline Tours.

The meeting also included an introduction of new officers and Chamber board members. In addition to Fryar, the officers include Gary Hancock of DTC Communications as vice president and Wanda Thompson of the Blue
Porch Cafe as treasurer.