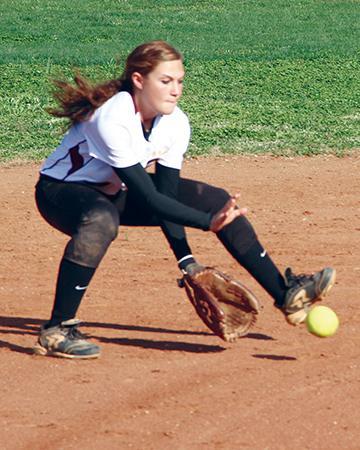 One huge inning was all Cannon County's softball needed to dispose of Central Magnet, 3-2, in a District 8-AA showdown at Cannon County Wednesday (April 9).

Cheyenne Fann delivered the third of three straight doubles to score Livia Walker with the winning run in the bottom of the sixth inning for an exhilarating comeback win.

"The girls never quit," Lionettes Head Coach Dorinda Walker said. "They kept battling throughout the game and finally made something happen when it mattered most."

Until the sixth inning, nothing had gone Cannon County's way.
The Lionettes (11-7) trailed 2-0 and were being no hit.

With one out, Macy Williams stepped to the plate and ended Alyssa Ward's no-hit bid with a sharp single. Macy Clements then laid to rest any thoughts of a shutout when she ripped a double that plated Williams to pull the Lionettes to within 2-1.

Suddenly, the game's outcome also was in doubt when Livia Walker stepped to the plate and made it back-to-back doubles with a two-bagger that plated Clements with the tying run.

"You could sense the excitement and the desire to finish the comeback," Coach Walker said. "It was one of those innings were everything came together. It was a win the girls deserved because of the way they battled and fought back."

Fann pushed the emotion to a fever pitch when she stepped into the batter's box and belted a Ward offering deep into the outfield for a third straight double. This one scored Walker and provided the Lionettes a slim 3-2 cushion.

The four consecutive hits in the sixth inning were the only hits Ward allowed.

Kristen Hale was stellar on the mound for Cannon County. She competed and scattered nine hits. She struck out five and walked none, allowing two runs, one earned.

Central scored both of its runs in the top of the third. From there, Hale pitched around trouble spots and controlled the Lady Tigers' lineup to give the Lionettes a chance to rally.