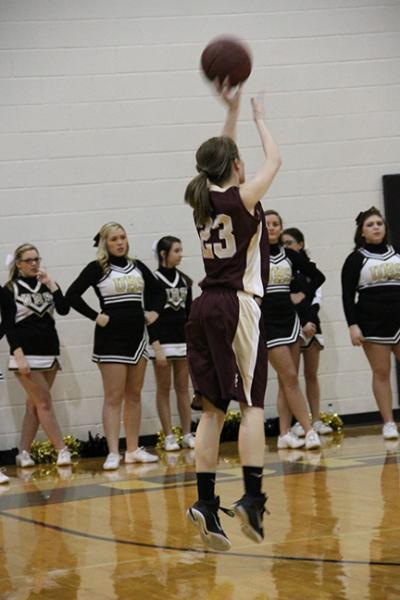 A 28-point Lionette third quarter notched another district sweep for Cannon County after their 77-29 senior night win over York Institute on Tuesday.

Already up 38-13 entering the third period, Cannon County focused on duplicating their first half performance, and did so by scoring 28 points on 12-of-15 shooting.

"We've not been a good third quarter team all year. I challenged them at halftime. We need to play the second half like we played the first half," veteran head coach Michael Dodgen said.

"I feel like if we do things like that then we're going to give ourselves an opportunity to beat (teams) inside of our district that allows us to move onto the next level."

Late in the first, the Lionettes (18-7, 5-6) gained momentum with an 11-0 run after an out-of-bounds save by Erin McReynolds led to a wide-open Kelli Davis 3-pointer.

McReynolds, nearly finished with a double-double on senior night scoring nine points and adding 10 helpers.
"Erin had 10 assist and anytime you get that out of your point guard you're getting a good night out of somebody," Dodgen said.

A solid 21-point second period performance from the Lionettes helped put the game out of reach for the Dragons, a trait Dodgen has been searching for from his team.

Just as the opening half came to a close, Cannon County forced a York Institute turnover that led to an Autumn King basket at the buzzer resulting in a 38-13 Lionette advantage.

Seniors Kaylee Hayes, Maynard, McReynolds and Hale were recognized during the senior night ceremony following the win.
The Lionettes previously won at York Institute 62-52 on Dec. 16, 2014.

"We gave ourselves an opportunity to win on the road against the No. 1 team in the district, defensively," Dodgen said. "We just missed way too many easy shots."

Down 28-21 heading into the final period, Cannon County rallied to score 15 points, the most of any team during any quarter, but it wasn't enough to complete the comeback attempt.

"I think we're a team that's right on the edge of being in the top three of this district," Dodgen said. "I also look at it in the fact of that I'm hoping that teams are saying I don't want to play Cannon County."

Cannon County led 9-7 after the first quarter.
Upperman shot 69 percent (18-of-26) from the free-throw line.