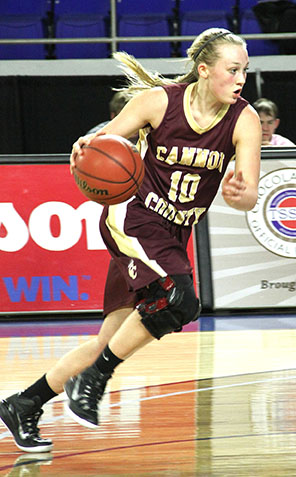 The magical run though the postseason ended Friday night at the 2015 TSSAA State Tournament for the Cannon County girls' basketball team. Its season concluded with a 69-48 loss to Martin Luther King during the Class AA quarterfinals. The Lionettes finished the season with a 24-10 record and Region 4 champions.
Coming into the tournament, CCHS had been on a magical ride through the postseason after a less than stellar regular season, in which they earned the No. 5 seed in District 8. During the next two weeks, the Lionettes defeated the top four seeds ahead of them to win the Region title. They could have won the district also, but the title game was cancelled because of the ice storm a few days ago.
However, their Region title earned them a home sectional game against Sequoyah on March 1 at the Robert A. Harris Gym in front of a standing room only crowd, which the game sold out in 15 minutes. At stake was a third consecutive appearance, and fourth in five years to the Elite Eight in Murfreesboro.
The Lionettes knew they had to fight with everything they had in order to reach their goal, but by now they were already used to it since hardly anybody gave them a shot before the postseason started to make it back to the Glass House inside the Murphy Center.
Early in the third quarter, SHS went on an 8-0 run to take a 31-29 lead. In the meantime, CCHS answered with a trey by senior sharpshooter Kristen Hale to take the lead at 32-31. Hale was held scoreless during the first half, but in the second one she had 14 points, including four long distance triples to put the Lionettes ahead for good.
"Coach (Michael Dodgen) told me to calm down, and come up and be the good shooter that you are," Hale said after the win. "I believed him, and I just came out and I was more confident."
Late in the game, CCHS had to hit several free throws to keep them ahead, fellow senior Erin McReynolds and junior Kelli Davis combined to hit nine of them, which was the only way they scored during the last minute of the game. Each one was needed as the Lionettes advanced to the state tournament with a 62-60 win.
"I was just thinking about that glass house, and how much I wanted to be there," McReynolds said. "I just knew if I made these, we would be right back where we were last year, and it meant the world to me that my teammates backed me up before I went to the line."
CCHS had five players in double figures to help them return to the state tournament. Hale led the way with 14, Autumn King had 13, McReynolds and Davis each had 12, and Kendra Maynard chipped in with 11.
With the win, CCHS was heading back to its 14th state tournament, and fourth in the past five years. Of course, it was hoping for its first state title since 1989. The Lionettes quarterfinal opponent was Martin Luther King, based out of the Music City. This was the first ever meeting between the schools, and the Lady Royals were hoping of make some history of their own.
MLK qualified for the state tournament for the first time ever last season, but it was eliminated in the quarterfinals. However, they were coming off a huge upset victory over No. 2 ranked and once-beaten CPA in their sectional game.
Early in the opening quarter, CCHS hung in with MLK and the score was tied at 10 after a layup by Hale with 1:28 left. However, the Lady Royals took the lead for good when six foot senior guard Jordan Majors blocked a Lionettes shot, and fellow senior guard Briana Smith converted a three-point play with :53 seconds left in the first quarter to put them ahead 13-10. That would be the closest CCHS would get during the rest of the game.
At the beginning of the fourth quarter, the Lionettes went on an 8-0 run to cut the lead down to 48-41 after a layup by junior Autumn King with 6:17 remaining in the game. However, during the next two minutes Hale, Davis and McReynolds each fouled out and Dodgen was hit with a technical foul for arguing a call with the officials. The Lady Royals sealed the game with an 11-0 run during the same time period and the Lionettes magic finally ran out.
"I am proud of these kids, no matter what happened tonight," Dodgen said after the loss. "Obviously, you come here wanting to win it, and you want to do everything you can to win it. Sometimes it just does not happen. You cannot lose three starters, and three of our leading scorers when you are trying to make a run to cut it to seven. I am proud of our kids' effort, and I thought they played hard. They gave it everything they had, and that is all you can ask for.
Senior Kendra Maynard led CCHS in scoring with 15 points, while McReynolds added 11 in a losing effort. MLK got 22 from Smith and 21 from Majors in the win.