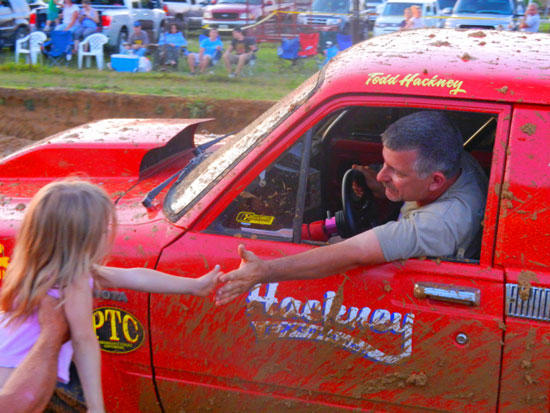 Says mug bogger Todd Hackney, nicknamed Dirt Dauber, of Murfreesboro: “I do like to have fun, and I do it for the kids. Them little hands sticking through the fence giving high fives and wanting your autographs. That makes it worth your time.”
It’s Sunday afternoon following a fierce night of competition at the Ivy Bluff Mud Bog, and Dirt Dauber, one of the top boggers, is washing his truck.

“Yeah, that’s what you got to do: About three hours of pressure washing,” says the Dauber, aka Todd Hackney. “You go out and wash it and wax it and then go run it in the mud. It may not make much sense to many people.”

Ah, but on Saturday nights in the southeastern most corner of Cannon County within a hoot and a holler of the Coffee and Warren County lines, it makes a lot of sense to hundreds of folks who pay five bucks a pop to hear the revving of engines and then watch trucks tear through a muddy ditch as the reddish-brown glop explodes through the air like an erupting giant chocolate shake.

Talk about yee-haw fun. This is the place to chill out, hang with buds and kinfolk, nosh on burgers, nachos and chili fries and swill SunDrop Cola (the unofficial beverage of choice here). But the main attraction remains the hopped-up trucks zipping through a 175-foot-long and 30-foot-wide pit, cut 4-feet-deep in the center, that is knee deep in mud.

The baron and baroness of Ivy Bluff Mud Bog are Barry and Sue Mitchell, also the owner-operators of the nearby Ivy Bluff Auto Salvage. The second Saturday night of the month, April through September, the Mitchells welcome up to 1,000 folks to their bog in a pasture for a four-to five-hour party starring 40 to 80 drivers and their vehicles, trying to see who can get from one end of the muddy pool to the other end the fastest.

“There’s something about mud boggers. They’re diehards,” says Barry over the sound of country music and belching engines. “This is the oldest-running mud bog in the state of Tennessee to the best of my knowledge. We started six years ago.

“We kind of do this for fun. There’s not a lot to do in Cannon County on Saturday nights. We‘re not eat up with entertainment around here. I just love the folks and everybody. It’s not a big moneymaker, but we give all of it away mostly and just enjoy all the people.”

Mitchell, 45, defines a mud bog event as “a competition between trucks and drivers to compete in a pit for the furthest distance or the fastest time through the pit. It‘s competition against man and his truck.”

But there are ladies competing as well. Shea Butcher, 20, of McMinnville, has been bogging since she was15 and drives either her ’76 Chevy or ’79 Ford pick-up.

“I enjoy making kids happy. They high-five you when you make it through, but beating the boys, that’s the best part,” says Butcher with a grin.

Lynyrd Skynyrd’s “Sweet Home Alabama” booms over the loud speakers, followed by Brad Paisley’s “Mud on the Tire.” Spectators pour into the grassy lot. Most of them back their vehicles up to within 15 feet or so of the pit. Here, they set out lawn chairs on the grass or in their truck bed to enjoy the show. Ball caps and blue jeans seem to be the fashion statement of choice, while, on this off-and-on rainy evening, mud soon swaths shoes, boots and bare feet.

Alexius Williams, 13, who attends Morrison Elementary School, says she doesn’t miss a bog. “I come every time, me, my mom, my brother, grandpa and uncle. I like watching the trucks go through it,” she said.

Before the bogging begins, Mitchell holds a quick meeting with the drivers to go over safety issues and thank them for participating. “Let’s get this done. It’s a little wet but let’s get in the bog,” he says.

Next the National Anthem plays. Mitchell leads a prayer, then says to the crowd, “Let’s get ’er done.” The mud bog is on.

Mitchell formerly trucked in water from a river to soak the bog, to the tune of 30,000 gallons per event, but has since installed an irrigation system and runs water from a well.

First driver up is Dawn Jones, a bookkeeper from Scottsville, Ky. Her pink pick-up runs 112 feet and 10 inches through the bog before miring up and stalling. A John Deere tractor pulls her out with a long, strong emergency cord.

“I just began competing this year. Last year we came to watch, and my boyfriend had a truck. He painted it pink, and said, ‘OK, honey. You’re gonna drive,’” said Jones, who enjoys “putting the pedal to the floor.”

“It’s a lot of fun. People need to come out and try it. We have so much fun and have met a lot of good people here,” she said.

Driver Todd Hackney, the “Dirt Dauber,” 50, takes things a bit more seriously. Driving a 1983 Toyota on a Chevrolet frame, he has only missed one bog at Ivy Bluff since it began.

“I started back in the early ’80s, just going out with buddies and playing in the mud on old logging roads and whatever mud hole we could find,” said the maintenance worker, who is one of the star drivers here and has sped through the bog at times around four seconds flat.

“You got to be committed. It ain’t just getting up on Saturday morning and washing your truck and working on it. I take it as serious as a NASCAR driver. I work on it four or five nights a week,” Hackney said.

“It takes a lot of know-how, how the motor works, gearing. It‘s not like throwing a big motor in a truck and going at it. It takes a lot of experience at mechanics. It just takes a lot of time. I will probably put in 20 to 25 hours a week, me and my buddies, brothers and brothers-in-law.”

As for modifications to his vehicle, he says, “We put bigger tires on it. We groove the tires to make ’em have more traction. We re-gear the axles for the bigger tires. I actually have about a 95 miles per hour wheel speed, but only may be going 40 to 50 miles per hour out there.

“We are floating across the mud now. We don’t actually mud-bog deep mud but have got our trucks modified enough so we skim across it like a boat floating across water or like skipping a rock,” says Hackney, given his nickname by his daughter Abby, 15.

“Everybody has a name for their truck that usually becomes their nickname. My shop always had a lot of dirt daubers and they build their nests out of mud,” he explained.

There are five classes of competition at Ivy Bluff. Those 14 years of age or older may compete in A and B classes, while only those 18 and older can compete in the C, D and E classes. The winners take home trophies, while prize money ranges from $200 for first place to $25 for fifth. The competitors come from Cannon, Rutherford, Warren, DeKalb, Grundy, Coffee and other Middle Tennessee counties.

Mitchell, who has lived in the Ivy Bluff community since he was 16, occasionally competes in a 1995 Grand Jeep Cherokee, and his wife, a native of Danville, Va., has raced a few times in a Bronco. Sue’s main chore is collecting admission at the gate.

The couple met, who met in a parking lot in Greensboro, N.C., have been married for 21 years and have a daughter Susan, son Dillon and grandson, Joshua.

The bogging blazes on through the night. The mud zings 30 feet into the sky and 50 feet horizontally, at times splattering the bog watchers. The crowd, filled with young people and families, enjoy the trucks, conversation and chow.

“This is the first time I’ve been here. I wanted to check it out and see how the mud bog was done,” said Jeff Meeks of Altamount, between bites of his burger from the concession stand. “I brought my wife, daughter and grandbaby.”

Midway Volunteer Fire Department members and their family staff the concession stand, which on a good Saturday night peddles a hundred hot dogs and 250 burgers. Also on the menu are chili fries, nachos and cheese, soft drinks and sweet tea.

“This is our only opportunity to raise money,” says Krista Trail of Ivy Bluff, a teller at First National Bank in Woodbury. “This enables us to better service our community by purchasing equipment and gear necessary to protect our homes.”

Mitchell said that admission fees of $2,600 from the June mud bog were donated to the volunteer fire department.