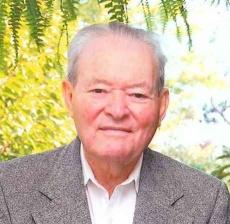 FOWLER IVIE TODD, Ph.D., age 92, of Murfreesboro, died March 3, 2010, professor emeritus and former chairman of the Business Administration Department at Middle Tennessee State University. He was a member of the East Main Street Church of Christ where he taught Sunday School and served as an Elder.

A lifelong and passionate farmer, he raised cattle and lived on farms in the Dilton Community over 40 years. He graduated from Buchanan High School in Rutherford County and attended Middle Tennessee State University. His bachelors degree is from Murray State University, masters degree from George Peabody College and a Ph.D. from the University of Illinois. He taught high school in Oneida, Woodbury, and Franklin and served as principal at McFadden Elementary School in 1953-54.

Dr. Todd retired from MTSU in 1983 after 25 years of service. While there, he touched the lives and careers of numerous MTSU graduates, using his acquaintance with business men and women of MTSU. He also began a series of management seminars open to the public that brought prominent outside speakers to MTSU beginning in the late 1960s.

Dr. Todd served in the U.S. Navy during World War II in the Pacific theater of operations. He became a Lieutenant, Junior Grade, and served most often on two destroyers within the same squadron, the U.S.S. Waller and the U.S.S.Cony. His ships participated in all the great naval battles in that theater, from the end of the recon quest of Guadalcanal in 1943 to the landings on Okinawa in 1945.

The Todd family wants to express their deepest appreciation for the care and love shown by the staff at the Health Care Center at AdamsPlace and Alive Hospice.

Memorial may be made to Raiders for Christ, Middle Tennessee Christian School, the Todd Cemetery Association (c/o Mrs. Tom Burks, Woodbury), and the East Main Church of Christ.