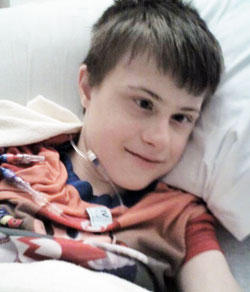 DYLAN HOLLANDSWORTH
Dylan Hollandsworth is 15 years old. When he was born, he was diagnosed with Down ’s Syndrome.  He  was a healthy, stout, energetic, spunky, and sweet little boy until about November of 2006.

In November, he started being somewhat lethargic, running a low grade to moderate fever, not eating as well, having joint pain, and having joint swelling. After several trips to the Doctor, several blood work ups, a trip to a pediatric immunologist, and a CT scan (which all showed normal), a complete diagnosis was not positive.

We were told possibly he had juvenile onset rheumatoid arthritis in May of 2007, and started treating as such.

On the night of August 9th. 2007, Dylan had a severe chest pain. After several more tests, another CT, a biopsy,  and a bone marrow  test , we finally had a definitive diagnosis on August 10th, 2007.  Dylan has Nodular Sclerosis Hodgkin’s Lymphoma.

In January 2008, Dylan went into remission after extensive chemotherapy. However, in August 2008, he relapsed once again. This time, he had to undergo a more intensive chemotherapy, an autologous stem cell transplant in February 2009, and radiation.

When we thought we were finally finishing treatment, Dylan developed Post-Transplant Lymphoproliferative Disorder, which was a different form of cancer due to transplant. He underwent another 6 month round of chemo for this.

He went into remission in December 2009 and stayed in remission for a full year. Then in December 2010, he started running fevers again. Of course, this caused us great fear that his cancer had come back again.

However, after several tests, it was determined that he had histoplasmosis, which is caused by a bacteria found in the dirt, here in Tennessee. People with suppressed immune systems tend to develop this. It put up a red flag to his transplant doctor, who said that Dylan's immune system should be built up from his stem cell transplant enough to fight off these bacteria.

After further testing, it was determined that Dylan had  an immune system deficiency. His immune system started shutting down when he reached about the age of 10 ... which is what caused all of the above to happen.

Now, we are currently waiting for a bone marrow donor match so Dylan can get a bone marrow transplant. It will "restart" his immune system and should "fix" everything.

We had two possible matches at first, but then the donor matches were unable to be located. Dylan is still on the list for a bone marrow donor ... they check the registry on a regular basis to see if there is a match.

Now once again he has developed another Post-Transplant Lymphoproliferative Disorder.

But he needs help.  He needs more people to be placed into the Marrow bank so he can find a match and a miracle!  In short he needs YOU!

Dylan has been such a trooper through all that he has gone through. No child should have to go through this, but it is amazing how well they adapt to this new way of life.

PLEASE come to our Marrow Drive and Craft Fair in Auburntown, at the Auburn School’s Gymnasium on December 10, 2011, from 10am till 4pm!  There will be Fun, Food, and lots of Christmas  Shopping!

All for a good cause! All donations and booth proceeds go to Marrow.org,  an organization that provides the bank for bone marrow transplants.

Anyone age 18 to 60 is asked to come and undergo a quick cotton swab test. From that swab, participants will be entered into the Bone Marrow Bank and possibly matched up with patient in need of a miracle.

Print
Members Opinions:
[Delete]
I hope you get lots of support. Can you tell us more about what this would entail if we were a match? I posted this story at my job.
[Delete]
news: I can tell you that the process to become registered in the bone marrow data base is the easiest process I have ever done.

I did this a few years back and I was sent a free kit in the mail with two long Q-tips. You simply swab the inside of your cheek, put it back in the container that is provided and mail it back in the postage paid envelope that is also provided.

You will then become part of the data base of people who could potentially save the life of someone with cancer.

The process is 100% voluntary and you can refuse to participate at any time. You are not legally bound in any way to donate even after you have signed up.

The actual process of donating from what I have read could be anything from simply donating blood to the actual donation of marrow. Every case is different and not every case requires actual bone marrow.

Here is a link to the Be The Match website that offers a lot of information and explains in a lot more detail than I could: http://marrow.org/Home.aspx

Personally, I would recommend everyone joining. It is easy, it is free and it might save someone's life!

toddh
[Delete]
What an amazing day! I want to thank everyone who came by the Do it For Dylan , shopped, ate, donated, and those who got placed on the registry! We had so many folks come through that I know I didn't get to see you all.

A special thanks to all the helpers that worked SOOO hard for making it a success!