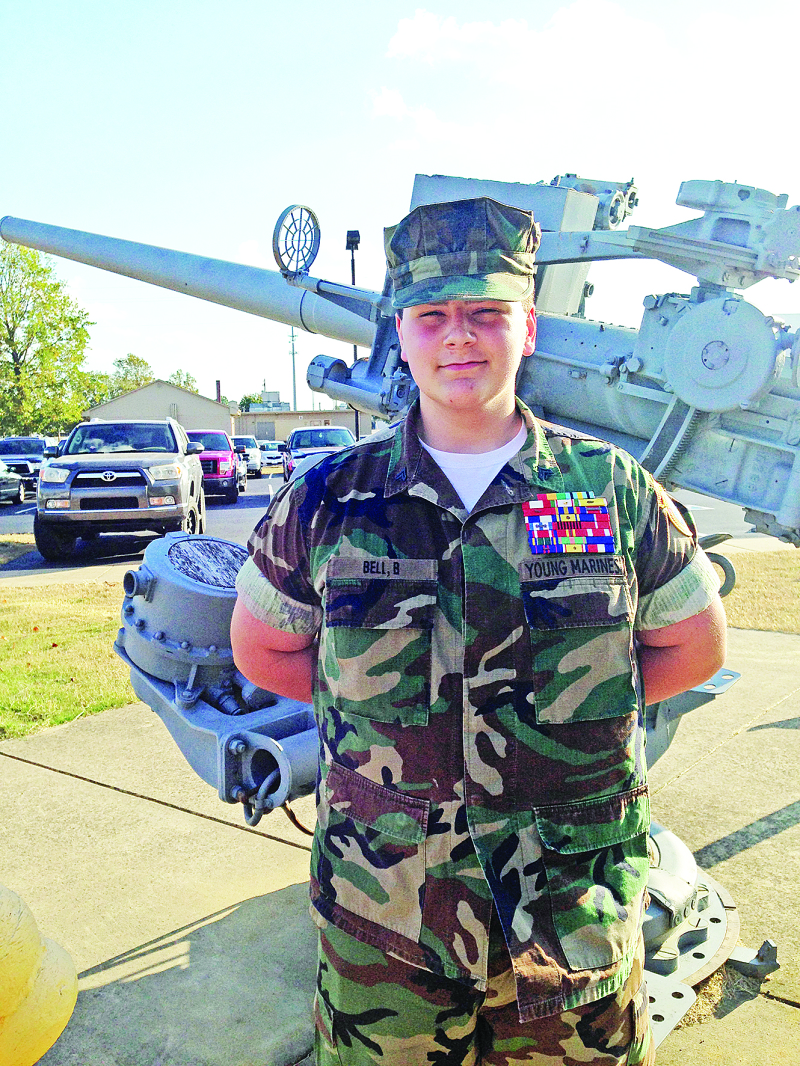 The Young Marines is a youth education and service program for boys and girls, ages 8 through high school. The Young Marines promotes the mental, moral and physical development of its members. The program focuses on character building, leadership and promotes a healthy, drug-free lifestyle.

"His potential for leadership as an adult is quite high," said Unit Commander John Cintron. "He demonstrates leadership traits in all witnessed activities. He is a mentor to many of our younger Young Marines."

Cintron said Bryson is constantly involved in activities both inside and outside his Young Marine battalion.

Following his selection by the local unit, Bell was selected as "2016 Young Marine of the Year for the 1st Tennessee Young Marines Battalion which consists of three YM Units in Music City, Mid-Cumberland and Rutherford County.

The Young Marine Oath of Obligation to which Bryson committed is, "From this day forward, I sincerely promise, I will set an example for all other youth to follow and I shall never do anything that would bring disgrace or dishonor upon God, my Country and its flag, my parents, myself or the Young Marines. These I will honor and respect in a manner that will reflect credit upon them and myself. Semper Fidelis."

"Bryson Bell is a true patriot and has been supporting the Veterans Day activities, the program at Cannon County High School, and the annual Veterans Day Parade since he was four years old," Col. Stone said.

At that early age, Bryson would attend and ride in the Veterans Day Parade with this grandfather, Charles Luther Mooneyham. At age four, he was already wearing a military uniform, Stone said.

"Bryson is truly outstanding by any measurement," the colonel said.

"Bryson Bell has all the makings to become a general officer and leader of this great nation. It is my true belief that he will one day be a famous general in the military of the United States of America," he continued.

The Hilton Stone American Legion Post 279 is proud to be the sponsor for the Young Marines in Cannon County. The Young Marines perform as the official color guard for American Legion Post 279. They perform at the Veterans program at Cannon County High School and at the annual Veterans Day Parade. They are also official color guard for the Post's monthly meetings.

"Keep your eye on this young man because he is going places. Good luck and God bless," Stone said.

Young Marines units are nationwide, community-based programs led by dedicated adult volunteers. Many of these volunteers are former, retired, active duty, or reserve Marines who believe passionately that the values they learned as Marines had a positive effect on them. It is through these caring adults that Young Marines learn the inner values of Honor, Courage, and Commitment. There are currently only eight Young Marine units in Tennessee.

For more information please go to the website at www.youngmarines.com.