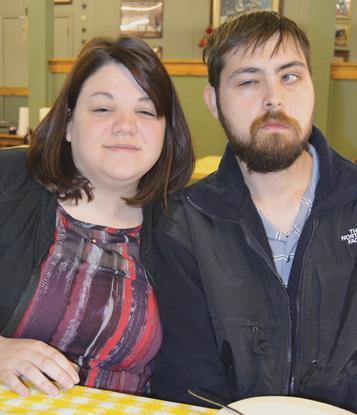 This young man's health issues began with a slight loss of hearing back in 2011.

But, that initial hearing loss was triggered by not one, but two rare and aggressive brain tumors, which have exploded into a raw and real life-and-death crisis for 28-year-old Woodbury resident Caleb Milligan.

Nine surgeries and three years later, Milligan is no longer able to work as a shipping manager at the Life's Fortune plant in Murfreesboro.

"After multiple mis-diagnoses, starting with a reputed inner-ear infection, my husband has had nine surgeries to remove the tumors," shared 26-year-old Amber, Caleb's wife. "We realized we're in a real nightmare when doctors told us Caleb would die without immediate surgeries."

How rare is Caleb's tumor?

"Doctors advise my brain tumor happens to maybe one person out of 1.8 million people," Caleb accounted. "Making it more difficult to comprehend, my tumor is not cancer. It's a very aggressive tumor that wraps around nerves and the portion of my brain that primarily controls the left side of my body, including speech, sight, hearing, taste … to name a few hits the tumor has caused."

Caleb cannot estimate the days he's been hospitalized at Vanderbilt, much less the multi-thousands of dollars in medical bills he and Amber have incurred.

However, Caleb and Amber still exhibit a bright outlook in spite of their severe health prognosis.

"We're thankful to live in Middle Tennessee, with our hometown being Woodbury!" Amber amplified. "The whole town is trying to help us."

"And we couldn't be making it, without all the prayers here in Woodbury, Murfreesboro, Smyrna and Nashville … churches and praying folks all around the world, for that matter," added Caleb.

"In Woodbury, when one person hurts, we all hurt, as evidenced by the community-wide 'Caring for Caleb Benefit' scheduled for April 5 at the Cannon County Community Center," accounted Woodbury Harold Patrick.
Benefit organizer Ashley Skelton described some of the donated goods: "Artisan Ricky Caldwell has donated some gorgeous White Oak items from his shop.

"Judging from the turnout of donated items and services that range from inner-room house painting to extended heat-and-air care, we're going to have a good turnout," Ashley predicted. "We also have haircuts and nail treatments donated for the auction set to start at 3 p.m., with the benefit to run from 12 noon-7 p.m. on April 5."

Ashley has known Caleb since he was a sophomore back at Cannon County Central High School.

"He's a very strong and courageous man, who has weathered having two brain tumors removed," added Ashley. "It seems like God gives some of the toughest assignments to those strong enough to fight and get through it. Caleb is one of those fighters. We're so proud of him.

"I've also known Amber from high school," Ashley added. "Although young, they're trying to do the right things in life, including buying their own home and being responsible hard-working, God-fearing people."

Upon meeting Caleb, one can't help but notice his dark eye-patch.

"An entire community is rallying around me, in my fight for life," Caleb assessed with excitement showing in his right eye, since he has to cover his left eye to combat double vision. "Our Woodbury Methodist Church and pastor have been there for us too."

"The tumors have caused my left eye to turn inward, resulting in double-vision," Caleb diagnosed. "Therefore, I wear this black patch over my eye to combat the double-vision."

"In our 'Caring For Caleb Benefit' that is free to the public, we have live music by bands 'The Busks' 'Hey Chuck' and 'The Gilley Brothers,'" confirmed event coordinator Ashley. "That's when our neighbors, plus total strangers, will open their hearts and billfolds to help Caleb and Amber."

"A barbecue fund-raising ($9) meal will also be available," Ashley added.

"Plus, we'll have a 'corn hole tournament,' and games for children."

Persons needing more benefit information can call Ashley at 615-351-6422 or Amber at 615-801-0342.
Murfreesboro resident Mark Stevens, who took over Caleb's job at Life's Fortune, has helped promote the benefit.
"Caleb is that type of young person who wants to work and provide for his family, so it's a shame he's been hit so hard physically," Stevens explained. "We want to help get the word out for that big upcoming fund-raising benefit, to help him and Amber."
Caleb and Amber shared some of the trials the tumor has triggered in their young lives.
"We've been married six years, but have been with one another going on 11 years," Amber noted. "Caleb, three years ago, came home from work one day, complaining that he thought he had some hearing loss, particularly in his left ear. Then some dizziness followed."
"Doctors and associates first thought I had an inner-ear infection," Caleb added. "But after several months, it was getting much worse, when we finally had an MRI in Murfreesboro. The MRI test showed something much worse than an ear infection, and our local physicians in Smyrna and Murfreesboro referred us immediately to Vanderbilt.
"We were expecting something like Meniere Disease, which is treatable," added Amber. "Within hours of the MRI, they couldn't refer us fast enough to get to a specialist surgeon at Vanderbilt, who specializes in brain tumor treatment."
"It shocked us, to find out I had this rare, but very aggressive tumor mass spreading its tentacles around portions of my brain and the nerves there," Caleb shared. "That referral came in January 2012. On the positive side, our surgeon at Vanderbilt is rated among the best in the world in combating this type of tumor."
"The tumor secretes hormones called catecholamines, which also causes Caleb's heart to beat a lot faster than it should," Amber added. "There's many bad aspects that is causing my husband major problems."