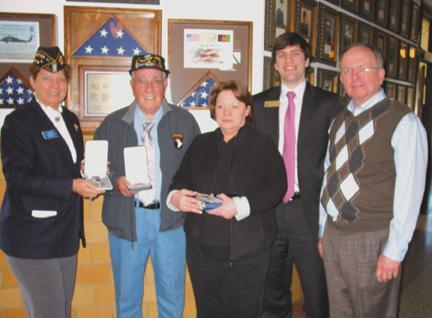 A fire in January claimed the house of 92-year-old Andrew S. Haines Jr.

Among the lost items were his military medals from World War II.

"His daughter-in-law, Brenda, contacted our office to see about having the lost medals replaced," said Willis Gardner, field representative for Rep. Diane Black.

On Thursday (Feb. 27), Haines was met at the Cannon County Court-house where he received 10 replacement medals includ-ing a Bronze Star and a Purple Heart for wounds received near Bastogne, Belgium in December 1944.
Haines was a paratrooper with the 101st Airborne Division, serving as an engineer and platoon sergeant with the 501st parachute infantry regiment.

Haines jumped out the doorway of a twin-engine C-47 and plunged into darkness. As he floated down to France to confront the Nazi war machine, he knew his world would never be the same.

Among other adventures, he was surrounded and wounded at the Battle of the Bulge.

The Philadelphia native was a freshman at the University of Pennsylvania when he was drafted in August of 1942. He did his basic training at Fort Benning, Ga.

"That's where I got familiar with paratroopers," Haines said. (Not to mention steel helmets, jumpsuits and M1 rifles.) "I decided to enter jump school. You had to make six jumps to qualify."

"We jumped in the dark," Haines said, referring to the early morning hours of D-Day as he and the 600 paratroopers of his regiment descended into France.

The Pennsylvanian was one of many thousands of Americans that jumped from C-47s in groups or "sticks" of 18. Their flight over the English Channel had taken a bit over an hour. The paratroopers carried about 100 pounds of extra weight that included a spare chute, an M1 rifle, ammunition, grenades and three days' rations as they plummeted behind the German lines.

The thoughts running through his mind as he fell through the black sky were simply of survival.

"I was nervous as hell and somewhat scared. Everybody was-even if they don't admit it," he said. "This was the first time I ever jumped when somebody was shooting back at you."

For most paratroopers, the fall to earth took about 2 or 3 minutes. Some suffered broken legs and severe sprains from the impact of hitting the ground. Some failed to jump as their planes were shot down in flight. Those who did land safely still faced the ordeal of locating their platoon or company in the dark.

To help the troopers locate each other, they had been given clickers called crickets. "It was used as a signal if you saw someone or a group coming toward you in the dark. We would click it twice and if they were American they would return it with one click," Haines said. "If they didn't answer with one click, we knew it was a German soldier.
"The first thing you tried to do was to get with as many of your troops as you could. That was the idea of getting out of the plane fast-get down there as a team. Get the platoon and company as close together as possible: First to find your buddies or them find you. Then you tried to figure out where the heck you were and where you were supposed to go.

"I landed near the town of Carentan, France, about 20 miles from the coast. Our objective was to work our way back to Omaha Beach and kill as many Germans as we could. We lost our company commander," said Haines, who saw several of his buddies killed in hand-to-hand combat.

After 15 days of battle in France, Haines and his outfit were shipped back to England to make plans for Operation Market Garden. On Sept. 15, 1944, they parachuted into Holland, near Nijmegen, to keep the Germans from destroying the bridges.

About a month later, he returned to France, near Reims. In mid-December of 1944, Haines and his company marched to Bastogne, Belgium, a crossroads for several main roads and an important location for the Germans.

"We had a big battle at the town of Wardin, Belgium," Haines said. "We were told to take Wardin. We had about 130 to 140 men in the company, and we lost almost 40 percent killed. We were surrounded for 11 days and lived in foxholes. The shells kept coming, and many men were wounded or killed," he added.

On Christmas Eve 1944 Gen. McAuliffe was asked by the German commander to surrender, and his famous response was "Nuts!" The entire 101st division was mighty proud of his response. His troops weren't about to give up.

The day after Christmas, Haines, a platoon sergeant, was wounded. "I was hit in my back by shrapnel from a mortar shell. Fortunately, it was not real serious. They got the shrapnel out, and I returned to the company," Haines said.
Relief came when the Air Force planes dropped supplies, strafed the Germans and destroyed about 50 German tanks. "We won there, although it seemed like an eternity," said the paratrooper who was awarded a Purple Heart and Bronze Star, among other medals.

Before the war in Europe ended in May 1945, Haines helped liberate the concentration camp at Buchenwald, which held German Jews. The German guards had fled, so there was no fighting, but Haines was an eyewitness to the horror that had occurred.

"You could smell the concentration camp from 2 miles away. It was a terrible sight. There were thousands in there. Some of them couldn't even walk or talk. "I survived three combat missions and got home in one piece. That was enough for me," said Haines, who returned to the States in December 1945 for a joyous homecoming.

"You think about things that you saw," Haines said. Thankfully, with the passage of time, the nightmares faded away, but the memories still run strong. Many of them are painful reminders of the price of freedom.