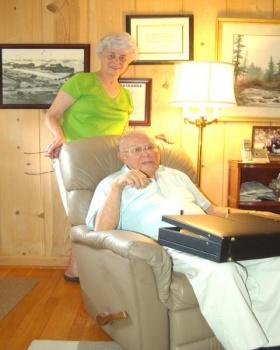 Bill Allen is pictured with his wife Idalee.

Navy Medic Bill Allen and three other shipmates held Bible study and said prayers aboard a Coast Guard vessel converted into a medical ship, on their way across the turbulent English Channel to take on wounded and dead one day after the biggest wartime invasion in world history.

"We had been scheduled for the invasion a few days earlier, but stormy seas and weather caused the postponement to June 6," Allen shared. "We went in close to the beaches to retrieve dead and wounded from that first invasion.

"One man in our unit was the son of a preacher, but he was not anything close to following the life of a gospel preaching man," noted Murfreesboro native Allen. "We designated the preacher's son to read scriptures."
That was the first trip Allen's unit made toward Omaha Beach where they witnessed blood, gore and hundreds of floating bodies of fallen U.S. soldiers. Their vessel could only get close to the beach due to high waves and German defense barriers in the water.

"Many of our dead had drowned due to the waves and the weight of their packs and weapons," Allen observed. "Some of the waves were more than 10-feet high during the invasion. It took your breath to witness this, and somehow the human mind works it won't happen to you, but then, you know it can happen in a war zone."

It was another Murfreesboro native son, shipmate Ed Phillips, who persuaded Allen he could help in the "death detail" of retrieving soldiers' corpses.

"Initially, I told Ed I couldn't do that," Allen recalls. "But Ed said, 'Yes, come on, come on, you can help,' and we began moving stretchers, lifting and cleaning up bodies, and wrapping them in blankets."

The second trip to retrieve the dead and wounded was to Utah Beach. The prayer group assembled again as they crossed the turbulent channel.

"We had transported our first shipload of dead and wounded back across the English Channel," Allen added.
Similar tactics were taken on the medical units' third trip back and forth across the channel.

"We read scriptures each trip," Allen confirmed. "We counted it a miracle that none of the German artillery shells, so far, had hit our vessel."

It was on the fourth danger-laden trip across the channel that Medic Allen's world exploded.

It was a tremendous explosion that blew Coast Guard LST 523 in split pieces. The explosion lifted both sections of the ship's hull high into the air tossing dozens of sailors and soldiers helpless into the huge ocean waves and strong currents.

"We were headed to Omaha Beach, when hit by a submerged German mine, which caused our vessel to split in half there in the choppy ocean waves. The explosion pulverized everything," Allen noted. "I was in shock like everyone else, but clearly recall trying to decide whether I wanted to jump in the water, where I'd certainly drown or stay and go down with the ship. Either way, I was going to drown."

"In a life raft, was one of my prayer partners manning the oar," Allen recalled. "I remember his shouting to me not to jump, but let him attempt to steer the life raft over close to the hull of the ship that was now sinking fast under my feet I recall him shouting out that I couldn't swim in the turbulent sea.

"Miraculously, he was able to guide the rescue raft close enough … I backed up a few steps, took a deep breath, ran and jumped as far as I could," Allen added.

It was raw life-and-death drama.

War records show that out of 145 men aboard the Coast Guard Cutter, only 28 survived.

You, the reader, can decide whether Bill Allen's prayers had worked in order for him to have survived multiple trips across the English Channel to retrieve wounded and deceased fallen comrades as German artillery shells rained down all around them.

"Miraculously, all four of the guys in our little prayer group, were among the survivors," Allen shared. "That night, the survivors boarded a Liberty Ship, and headed back to England. The skipper cleaned out a room, and put us in there. I remember Jack, the man who saved me, asking during our trip back to England, if I was awake, it was around midnight."

"Presently, as far as I can determine, only four of the total survivors are still living," Allen, now age 88, accounted.

Seventy years later, Bill Allen and wife, Idalee Tomlinson Allen, along with daughters Patti Hutchinson and Linda Allen, plus grandchildren Will and Emily Hutchinson, recently returned from a week-long journey back to Normandy Beach.

"It's my first time back to France," he noted. "There're seven to eight names on grave markers there at Normandy that I want to locate."

"It wasn't until Bill and the other survivors began having reunions in the 1970s, that my husband opened up and shared those terrible wartime experiences," Idalee shared. "It sends chills down me, when I realize Bill had only one chance to catch on that life raft."

He recalls "anger" from the war.

"I remember initially being mad and angry with God, allowing all that to happen," Allen described. "I recall questioning how a just God had spared my life. But then, as I prayed and recuperated, an understanding and peace came to me, that really, I wasn't in control of my life."

The possibility existed that Allen would see more carnage as a wartime medic.

"After the defeat of the Germans in Europe, the war raged on in the South Pacific," Allen noted. "It was back in England that a doctor blocked me from going to the Pacific war theater … diagnosing my nervous system had been shattered … diagnosing that I could no longer serve in combat conditions."

The war was over for Allen, born the son of Bill and Nora Harris Allen. He went in the Navy as a teen-ager, soon after graduating from old Murfreesboro Central High School in 1943.

Today, Bill Allen, a true American patriot, is one of two still-active charter members of the Murfreesboro Exchange Club that dates back to 1951.

Print
Members Opinions:
[Delete]
What a great story. What a great generation.
I cannot say enough good things about those men and women from that time period.
They knew what had to be done and did it because it was the right thing to do. No complaining, no blame and no arguing.
How far we have fallen in such a short time.
God bless to all of those brave men and women who served then and who still serve today!