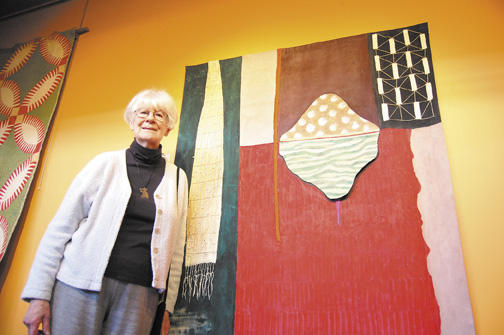 Arlyn Ende stands beside her 2012 textile "Vikkala," now on display along with more of her creations in the Cannon Hall's "Woven" exhibit.

By KEN BECK The Cannon Courier

When Arlyn Ende began to document the crafts folk of Cannon County in 1987, who could have dreamed it would eventually lead to the marvelous arts center that sits today at the western entrance to Woodbury?

Ende, 81, a textile artist who works from her Deepwoods Studio in Sewanee, Tenn., served as the first director of the Arts Center of Cannon County, and three of her pieces are among the stars of the "Woven" exhibit which runs through Nov. 27.

Ende, who confesses she was the county's "oldest hippie" when she and her late husband Jack Hastings nestled on a farm in Bradyville from 1972 to 1994, speaks affectionately to the history of the arts center, especially about the quilts, textiles and white oak baskets now showing.

"What an incredible skill to make white oak baskets," said Ende, who recently visited the arts center for a few hours, a stop that transformed into an impromptu homecoming as she reconnected with old friends.

Of the region's legendary basket makers, she says, "They remember that the baskets meant survival when there was no other way to make a living. They traded it for consumables they needed. I remember the pickers would come through Cannon County and take the baskets off in their trucks and fetch high prices for them in the cities. It's come full circle."

"This is the first time we've ever displayed all of our baskets at one time," said new arts center director Neal Appelbaum of the Dr. Ben and Gertrude Caldwell Basket Collection. "We've got about 200 white oak baskets made by 15 basket makers. The oldest basket is post-World War II, so it's 50 years' worth of basket making."

Appelbaum's concept for "Woven" was to present the county's weaving history as well as the art of commerce.

He said the title of the show was purposefully "a verb that allows us to talk about the physical act of weaving as well as the weaving of histories and relationships in this community.

"The majority of artist/crafters in the show are women. There are a few men represented. That dynamic is historically interesting; often, it is sons taking up their mothers' art," said Appelbaum.

A dozen quilts decorate the walls of the Cannon Hall including one created by the women of the Burt community P.T.A. in 1939. Four hundred red, white and blue blocks embroidered with names make up the piece, on loan from Micki Vinson.

Another quilt, made in the early 1940s by Mae Arnett LeFevers, consists of Readyville Mill Flour sacks and clothing remnants.

Meanwhile Ende's 54-foot textile, commissioned by Bill Smith and the Bank of Commerce in 1981, hangs in three pieces high on one wall. The tufted and carved wool textile is an abstract work that derives its design from traditional coverts and quilts by Cannon County women.

"Arlyn's piece is a modern work but uses quilt patterns in a more academic art perspective," notes Appelbaum of the work donated to the arts center by Regions Bank.

Creating those wall textiles 32 years ago caused some trepidation for Ende, an artist with a national reputation.

"Since my designs are very abstract, I was at first nervous about how they would be received by the rural community," Ende recalled, "but then I realized that the folks who lived here had for generations slept under quilts every bit as abstract as my work.  So I went back to the quilt makers in the directory and told them my plan to study some of their favorite quilt patterns.

"When I finally had these done, those quilt makers were so proud and so pleased to have had a share in their creation. 'Look what she did with my pattern,' they told others."

One of the roots of The Arts Center can be traced to the directory titled Cannon County Folk Artists and Craftsmen, which Ende compiled in 1987.

"From this book this community of craftsmen was born, and the name it took for itself was the Cannon Association of Crafts Artists," recalled the New Orleans native. "The directory allowed customers to go directly to the craftsmen's houses.

Ende commenced her career to some degree when she began making her own clothes at the age of 14, and says, "I was always involved in some kind of creative use of my hands and my quirky brain."

She went to college at Tulane University and Louisiana State University, and in 1956 helped found the Orleans Gallery, the first contemporary art gallery in her hometown.

The textile artist and her sculptor-husband, who died in July, lived in Boston, New York, Rhode Island and Tucson, Ariz., before settling in Tennessee.

"We came to Cannon County with a rush of newcomers in the late '60s and early '70s in a back-to-the-land movement," she said.

She and her partner discovered the county through an ad placed by Rob and Nora Handy of Dowelltown in the national magazine Mother Earth News.

"The ad said, 'If you are looking for beautiful land, write us or give us a call.' I called Nora, and she said, 'When you come East, come see us,'" recalled Ende, noting she and Hastings also had a close friend, David LeDoux, who taught at Middle Tennessee State University.

Finding a 65-acre farm on Burt-Bergen Road to their liking, they traded the Bluebird school bus they'd traveled in from Arizona as part payment for the property.

"Jack always said the happiest years of his life were in Cannon County," Ende said with deep reflection. "We felt when we came here that there were no strangers and there was an openness to outsiders and the weirdness that a lot of us represented.

"We were welcomed into the community, and from our neighbors we learned so much about what it meant to be rooted in one place for generations. We learned the true meaning of ties that bind.

"Every time we did something crazy or stupid, we could count on one of the old farmers keeping an eye on us, shaking his or her head. Finally, I did something surprising when I followed instructions in Mother Earth News and grew potatoes in straw.

"Oscar Duncan came over to see my crop, and he said, 'You did it. Doggonnit, you did it.' It was a small triumph," she recalled. "One neighbor, Elaine Stewart, spun yarn from my sheep's wool, and another, Charlene Parker, volunteered to start the first quilting classes at The Arts Center."

While working the land, the novice farmers also fulfilled artistic commissions. They took some of their works to the Tennessee Association of Crafts Artists (TACA) Crafts Fair in Centennial Park in Nashville where Duncan Callicott, the director of Cheekwood saw Hastings' carved cement planters, lanterns and landscape fountains, resulting in a show at Cheekwood, and their reputation grew.

Throughout the years, the duo continued to be called upon to create their art for schools, banks, houses of worship, corporations and residences, and from her Sewanee studio Ende continues to produce her collages and textiles today.

In the summer of 2010 she created "The Forks of the Stones," five vertical wool textiles for the curved wall along the Grand Stair at the new Saint Thomas Rutherford Hospital in Murfreesboro.

"My design depicts the three forks of the river, and its title refers not just to the Stones River and its branches, but to the fact that a significant fork of history occurred at that very spot during the Civil War," said the artist.

"The founding and flowering of The Arts Center might be viewed in a similar way. Twenty-five years ago three groups merged with a common goal: they were the Cannon Community Playhouse, the Cannon Association of Craft Artists, and an exceptionally creative and supportive community.  They shared a vision and worked tirelessly together. And, as they say, the rest is history."