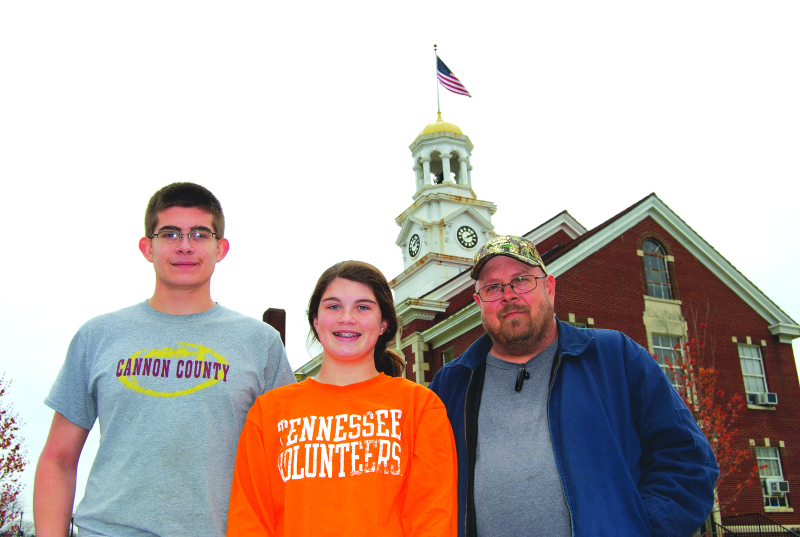 Bobby Moore and his children Abbye, 13, and Austin, 16, make the third and fourth generations of the Moore family that have kept the clock above the Cannon County courthouse running over the past seven decades. The Colonial Revival courthouse was complete

Bobby Moore cannot count how many times he's climbed up to the Cannon County courthouse clock tower but estimates it would be in the hundreds.
The only one who likely made more trips to the cramped, dark fourth-floor space above the Woodbury square would be his late father, William "Bill" Moore, and perhaps his grandfather, also named William "Bill" Moore.

Bobby proudly carries on the Moore family legacy of maintaining the clock works of the biggest clock in the county. And he's also mentoring his son Austin to handle the chore and even has daughter Abbye shares a hand in the family's time-honored tradition.

Bobby's not sure when his grandfather William Moore began tending the courthouse clock but believes it could go back to the 1940s. His father Bill Moore, who died in February, took over in 1973, and Bobby took the reins around 2005.

"My grandfather worked on this clock," says Bobby. "My granddaddy quit seeing about it, and it didn't run for quite a while. Then somebody asked my daddy about getting it running. Daddy said, 'I will, but I'm not going to do it for free.' About that time the county paid him $25 a quarter."

In the mid-1990s Bill Moore shared a bit more detail of how he became the clock repairman in an interview with Andy Bryson, publisher of the Cannon Courier at that time.

"I believe it was then County Chairman Lehman Mitchell that called me and asked could I get the clock running. . . . I told him I could restart the clock, and from then on I just kind of watch each time I pass through town to make sure the time is right and occasionally I stop by and give her a shot of oil," Mr. Moore told Bryson.

It's no stroll in the park to reach the clock tower. Bobby walks up the stairs to the second floor, and in a corner room climbs 10 rungs of a wood ladder to the third-floor attic space. After walking up four steps to another level of the attic, which surprisingly has a concrete floor, he ascends a second wood ladder about 11 feet straight up into the tower. This is a dimly-lit place where you best watch your head as there are plenty of hazards upon which to hit your noggin.

"I was little when I started coming up here with Daddy, probably 7 or 8 years old. I just come with him," recalled Bobby. "Then he got where he couldn't go up there, and then I started [working on the clock], but I'd tell him what it was doing.

"There was once when it got to where it wouldn't run, and he set up here for hours watching it and got it going."
Bobby's son Austin, 16, a sophomore at Cannon County High School, said he first climbed up into the clock tower with his dad when he was in the first or second grade.

Says Austin, "It was just cool to go up there. I've set the time, but that's about as far as I've gotten. I'm learning slowly. We go up there to do time changes and do work when it stops when it gets real cold. The engineering is pretty old but it's still running. It's pretty simple."

The teenager understands his legacy as the great-grandson of the first Moore who took on this task. "That's keeping it going," he said.

His sister Abbye, 13, an eighth grader at Woodbury Grammar School, said she made her first expedition to the clock tower at 6 or 7 years of age.
"I just followed my Dad. I guess I just wanted to see what it was like for me. I just think it's cool," said Abbye. "I tell them the time [when her dad and brother are setting the clock]," thus her wrist watch might just be the unofficial timepiece of the county.
The clock tower proves to be a tight space, about 10 feet square, with the clock works, which stand about five feet high and run about two feet wide and one-and-a-half feet long, taking up the center space.

"It's a weight clock but has the electric motor to run the weights," said Bobby. "It's probably one of the few weight clocks still in operation in Tennessee courthouses.'

The clock works consist of pulleys, gears and dead weights and probably weighs well over 200 pounds. The clock was manufactured by Seth Thomas and has that company's name and the date, July 27, 1936, printed on a small clock face at the top of the works.

Its striking Colonial Revival design was conceived by Nashville architect George D. Waller, among whose other achievements were Crichlow Grammar School and E.C. Cox Memorial Gymnasium in Murfreesboro, East Nashville High School and Junior High in Nashville; and the William H. and Edgar Magness Community House and Library in McMinnville.

The current courthouse was by built Bell Brothers Contractors of Murfreesboro and was listed in the National Register of Historic Places in 1992. The bell at the top of the courthouse was donated by Woodbury Methodist Church and came from the belfry of the church that had been erected in 1845.

Bobby points one other interesting historical fact, saying, "The first year or so the new clock tower had no face just holes," as the clock works were not set in place until a year or so later.

"I drive around the courthouse every day to make sure it's still running and the lights are on," said Bobby, who drives a Cannon County school bus.

"When it gets cold, down in the teens, it will usually stop, or rain and freezing that will stop it.
But if nothing touches it, it generally keeps running, and I just oil it," he said of the clock works.

He points out a copper fan that controls the speed of how quickly the bell rings. "That's what makes it get that 'cling! cling!'" he laughed.

Bobby repaired the wood timber upon which the bell hammer sits about 20 years ago. The clock tower is showing the wear of time and the elements.

He noted that the tower is leaking and rain water drops into the electric motor.

"This is a good building still. They just gotta take care of it," he said. "Several years ago the clock stopped the night before Good Ole Days. There was a bird stuck in the works and that was what stopped it."

As for passing the mantle along one day to his son, he says, "He's in training. He knows enough. He could start it."

Austin said he enjoys learning about the 80-year-old timepiece "because it's something we can do together."

"I can hear the bell ring from my house on Doolittle Road," says Bobby of the sound that is sweet music to his ears.

"I just enjoy the history of it, being part of it," he says of the big clock that watches over all four sides of the square. "It's still a ticking along."