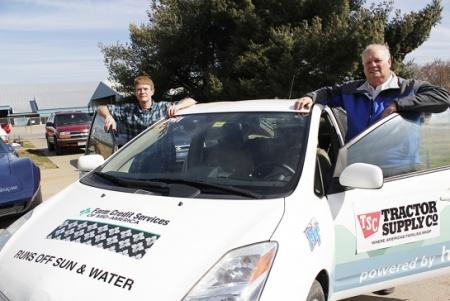 As Middle Tennessee State University agriscience teacher Cliff Ricketts prepares for a gasoline-free coast-to-coast drive in his quest to see a day when Americans need never worry about running out of fuel, he avows he wouldn't tackle such a venture without a Woodbury farmer by his side the entire route.

"There is no way in the world I would attempt this without Terry Young. I would put Terry up against any engineer in the country. The young man can do anything. He's so laidback. I tell him what I want and he does it. I'm the visionary and he's the mechanic. I can see it happen and he makes it happen."

"I'm the nuts and bolts. I keep everything running," said Young, who besides being an ace mechanic, has the experience in electrolysis, the process by which hydrogen can be generated from water for fuel.

Ricketts, the mastermind behind the big trip, envisions the future when cars will operate efficiently and cleanly via solar and hydrogen power.

Last March, he made one of his dreams come true when he and a hand-picked crew drove from the Atlantic Ocean to the Pacific in a relay of three vehicles using hydrogen-fueled water, solar energy and 43 gallons of E-95 (ethanol 95).

Come Saturday morning, Ricketts and his seven like-minded, energy-efficient road warriors intend to repeat the 2,500-plus-mile cruise, this time without burning a drop of gasoline.

"This year our goal is to go coast to coast on nothing but hydrogen from water powered by the sun. We take all our hydrogen with us," said Ricketts, referring to the seven 10-feet-long, 18-inch-diameter hydrogen tanks necessary to make the five-day transcontinental drive.

"It's taken 30 years to figure this thing out," he said. "We got a system here in place to demonstrate how every commuter in the country can drive fueled by sun and water."

Young, a 1990 MTSU graduate with a plant and soil science degree, got involved with Ricketts' schemes as a student.

"I took a class called farm power and equipment, and I guess he saw that I had a natural talent for mechanics. I grew up on a farm and me and my dad [Jerry Young] did all of our mechanical work ourselves, so next thing I knew Dr. Ricketts was recruiting me to help on his hydrogen project," said Young, who works about two months a year in MTSU's ag-education garage and raises corn and soybeans on his Cannon County farm the other months.

"This year I got started on the project in October. The number of hours I've worked on it would be unreal. I've been working seven days a week from early in the morning to 7 or 8 at night," Young said.

College professor Ricketts, 64, began his quest in 1979 after 52 Americans were taken hostage during the Iranian Revolution led by the Ayatollah Khomeini.

"That started slowing down Persian Gulf oil shipments, where then 80 to 90 percent of the world's oil supply was coming out of there. Gas prices exploded.

"The reason I got interested was because I was afraid American farmers would not get enough fuel to harvest their crops. So I wanted to come up with an alternative fuel, so American farmers could be energy self-sufficient during times of a national crisis," said Ricketts, also a beef cattleman, who grew up on a Wilson County dairy farm and has been teaching such classes as agriculture-teacher education, agriculture mechanics, tractor overhaul, alternative fuels and greenhouse management at MTSU for 37 years.

It's in the ag-education shop, actually a big garage, on the MTSU campus where Ricketts, Young and their associates work their engineering magic. Over the years they have assembled nine vehicles that run off of alternative fuels.

"We started out here to run an engine off ethanol. We figured it out. I've expanded my goal now to make American energy independent so at least commuters can drive off of hydrogen from water and the sun," Ricketts said.

For this year's crew Ricketts has selected what he terms "an all-star team," most of whom are MTSU alumni. The members include Woodbury's Young; Ben Hill of Murfreesboro; Nathan Fuller of Westmoreland; John Oden of Nashville; current students Harris Alexander of Nashville and Sean Burk of Crossville; and engineer Mike Sims of Jackson, Mich.

Sponsors of the expedition include Tractor Supply Company and Farmer Credit Services, while the Tennessee Department of Environment and Conservation provided a grant.

In preparation for this year's ultimate challenge, Ricketts drove a 1994 Toyota Tercel, fueled by hydrogen from water, across Tennessee, from Bristol, Va., to West Memphis, Ark., on Nov. 1, 2010.

Last March's cruise from New Tybee Beach, Ga., to Long Beach, Calif., used the same Tercel, a 2005 Toyota Prius and a 2007 Prius that ran on ethanol. Ricketts calls it a "dry run" for this year.

The vehicles averaged a speed of 60 miles per hour as they traveled interstates practically the entire route. They could have driven faster, but Ricketts says, "Safety is No. 1: Safety first and then reaching the mileage goal with hydrogen.

"If we can be patient, we can make it," he says of the trip coming soon. "Me and Terry [Young] will do most of the driving of the cars because we're so fuel sensitive. The others will drive backup vehicles."

For farmer turned record-breaking driver Young, "It's a challenge," he says. "I'm always up to a challenge."

About these cross-country cruises, he said that he is "constantly monitoring all the electronics and thinking of ways to conserve fuel. Last year our goal was to go on 2.2 gallons [of gasoline], which we made. Now I'm trying to think of ways how to better our fuel economy during the whole trip.

"We will be doing the same on this trip but we we'll only able to carry a certain amount of hydrogen in the storage tanks, so conserving hydrogen will be my main concern on this trip; I don't want to get 100 miles away from coast of California and run out of fuel.

"This is my diversion. I've been working for him [Ricketts] since 1988. I built the race car that set the speed record. That's my baby," says Young with a grin pointing to Young Thunder, the car that set the world's land speed record at 108 miles per hour for a hydrogen-powered vehicle in 1992 at the Bonneville Salt Flats near Wendover, Utah. "It took Jesse James [star of TV's "Monster

Garage”) and $20 million to break it."
Describing that thrill, he said, "It was a little emotional high to be able to accomplish something of that sort. Speed records are set ever day during the week of speed week on the salt flats. Ours was unique since it was on hydrogen fuel. I felt like all the years of hard work put into the project had finally paid off.
Young, who has a daughter, Amber Sky, a fourth-grader at Woodland Elementary, serves on the local Farm Service Agency county committee, is an officer of elections in his Cannon County district and sits on the board of directors of the Rutherford County Farmers Co-op. He also holds two patents on hydrogen fuel injections, which he plans to "sell off and let someone else run with it."

With inventive minds like Young behind Ricketts' vision, there is hope for America's come-and-go energy crises and the upward spiraling of gas prices.

"Why am I doing this?" Ricketts asks aloud.

"If the Persian Gulf closes down and fuel prices get to $10 a gallon, it would shut this country down. That's why I am so persistent about this. If we had a national emergency, in six months to a year we could have a system like this ready.

"I feel like I've made my contribution to mankind if I pull this off: To make an impact on the country and the whole world forever. I call it where the rubber meets the road. Now, will it have an impact? I don't know.

"If gas stays under $4 a gallon, we probably won't get too excited about it, but if gas gets over $5 a gallon, we'd start looking at all kinds of alternative fuels," says Ricketts, a man, just like Young, who is driven.