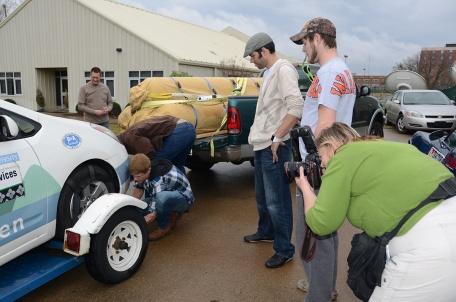 Terry Young, kneeling left, takes the initial steps to prepare the 2005 Toyota Tercel to be taken off the trailer on Ricketts' own flatbed truck after the group arrived Feb. 18 at the university.

Driving without gasoline, their fuel sources consisted of hydrogen from water separated by sun (solar), all produced on the MTSU campus.

Hydrogen expert Terry Young of Woodbury,  said the 1994 Toyota Tercel had approximately 70 miles of hydrogen-related fuel and the 2005 Toyota Prius had 20 miles left when the quest ended in Long Beach.

Young and engineering expert Mike Sims of Jackson, Mich., estimate there was enough hydrogen left in transported tanks to drive at least another 365 miles. Some of the hydrogen they left with from Murfreesboro on March 11 had to be dropped off in Amarillo, Texas, because it could not be transported into New Mexico on a trailer.

“It’s been tough. It’s been a challenging project with a lot of hurdles to overcome,” said Young, a 1990 MTSU graduate, who arrived earlier in the day after driving all night with the Ricketts’ youngest son, Paul. “I’ve been here seven days a week since January.”

Young, a Cannon County farmer, said he “kept the electrolysis unit and compressors running round the clock. We had to keep it running in order to make the trip. We almost didn’t have enough (hydrogen) made to leave. We actually left out of here a couple hundred PSIs (pounds per square inch) short on each car.”

Recent MTSU student Travis Owen, 20, of Woodbury, called it a “tiring, fun, learning experience. Everybody worked together and made it happen,” added Owen, now a student at Tennessee Technology Center at Murfreesboro.”

Sims said his role was to “do what made it successful. This year was all hydrogen. I helped out where I was needed.”

MTSU senior Aras Alexander of Houston, Texas, was among those making the trip. He had been in Ricketts' alternative fuels class last fall.

Other team members included Duane Griffin of Murfreesboro, who has sought advice from Ricketts for his own alternative fuel project; Rick Presley of Orlando, Fla., and formerly from Mt. Juliet, Tenn., where he was a high school student of Ricketts in the 1970s; and Paul Ricketts of Versailles, Ky., the youngest son of Cliff and Nancy Ricketts, who are Wilson County, Tenn., residents.