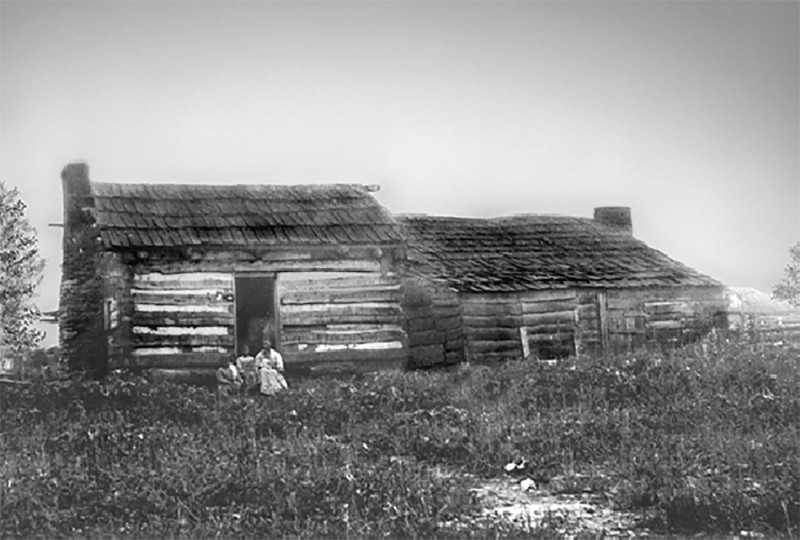 Shacklett's Photography * Union General William S. Rosecrans seized a ramshackle cabin for his battlefield headquarters on the Nashville Pike. His staff improved it by building a canopy outside with a bench and a warm fire.

You know what they say about Middle Tennessee's weather ...

The unpredictability of Tennessee weather came as a surprise to Union troops stationed here during the Civil War.

Many of them, hailing from far-flung places like Michigan, Illinois, Ohio and New York were used to hard-winter weather. What caught them off guard were the warm mid-winter days like we have been experiencing lately. They weren't accustomed to daytime temperatures in the 60s and 70s in December and January.

And often in the heat of battle or during a long march, young, inexperienced volunteers cast aside their thick blue overcoats and heavy brown blankets only to face the bitter cold at night.

During the battle for Fort Donelson, a group of Brig. Gen. U.S. Grant's Union recruits, who had discarded their warm coats on a warm February day, found themselves literally sleeping with hogs for warmth.

The summer of 1862 was long and hot and drought conditions persisted in most of Tennessee and Kentucky. The Cumberland River was so low in points that they were not passable by Union supply ships. The drought was finally broken in late December with heavy, persistent showers that turned the roads from Nashville to Murfreesboro into a muddy mess.

A young Ohio soldier, Liberty Warner, wrote his family and friends on Dec. 15, 1862 about the phenomena:

"We are all glorying the enjoyment of health and only need the smiles of those at home to make us happy indeed. We have a very pleasant camp here, close to this cane brake. It affords plenty of sport for the soldiers in the line of bird hunting.

"About an hour before sun set clouds of robbins may be seen coming from every direction toward the cane brake, where they take up quarters for the night. As soon as it comes dark the boys slip the guard and with torch and shelalah they charge on the devoted red breast, who stare at the torch until they are nocked off of the cane. Our mess had a pot pie of some 3 or 4 dozen of this species of songster (great dish that)."

Warner, born May 11, 1842 in Mt. Blanchard, Ohio, served as a private in Company H of the 21st Regiment, Ohio Volunteer Infantry.

A few weeks later, Warner was wounded at Battle of Stones River, recovered at the New Albany, Ind. hospital, and then was killed Sept. 20, 1863, at Snodgrass Hill during the Battle of Chickamauga.

"Nothing can surpass the beauty and pleasantness of the weather," Brent wrote on Dec. 17, 1862. "I feel quite cheerful and contented this morning under the balmy and delightful influence of the weather."

Gen. Bragg, and his command staff, felt assured that the Union Army of the Cumberland was positioning itself for winter. Bragg's army was preparing for an idle winter in Murfreesboro.

With Mattie Ready's wedding to Gen. John Hunt Morgan on Dec. 14, 1862, the town experienced a festive holiday season including a lavish Christmas Eve ball at the Courthouse. The Southern troops were well supplied in most instances and well fed.

The feud between Bragg and Maj. Gen. John Breckinridge was festering over the drafting of soldiers by Bragg from Kentucky, which had not seceded from the Union. The execution of Pvt. Asa Lewis of the 6th Kentucky for desertion made the schism permanent and may have played a role in the bloody charge by Breckinridge's troops on the second day of the battle.

Lewis was executed at noon on Dec. 26, the day the weather began to change. The skies were overcast and a cold wind was blowing as the rain began to pepper down.

While the Confederates waited for the approach of the new year, Federal troops were finally on the move. Union Maj. Gen. William S. Rosecrans could no longer ignore the orders from Washington D.C.

General-in-Chief Henry Halleck informed Rosecrans if he didn't move into action, "I cannot prevent your removal."

The pike from Nashville to Murfreesboro was a macadam road paved with layers of rolled stone. Other roads taken by the Union army were little more than dirt roads that quickly became mired with mud as the rain continued.

"Rosecrans's army had to advance, continually prepared to give battle, through roads sometimes knee-deep with mud," wrote Union veteran Alexander F. Stevenson. "The night preceding the battle passed drearily. The men in the front could only rest with their muskets in hand, while those in reserve had to make their bed either in deep mud or on rough stones."

Peter Cozzen in his book about Stones River told how Union officers even had to improvise shelter from the rain. Capt. Horace Fisher climbed inside a tool chest he found abandoned along the road, but it leaked so badly he still got drenched.

The bad weather worked to the benefit of the Confederates, slowing down Rosecrans' advance with muddy roads and a heavy fog. In the early afternoon of Dec. 26, the fog turned into sleet as the Union soldiers slogged along. That extra time allowed far-flung Confederate units to concentrate back in Murfreesboro.

The bulk of the Union army was still not place. Rosecrans decreed that Sunday, Dec. 28 was to be a day of rest. His weary troops needed it after two days of slugging through the mud from Nashville to Murfreesboro.

The weather on Monday, Dec. 29 was chilly, clear and with a heavy frost as battle lines continued to form. Twilight still found Union troops on the move with less than a third of the Army of Cumberland in place. That night, a cold north wind blew in, leaving soldiers of both armies to suffer on the cold, wet ground. Unable to sleep, troops looked for firewood using fence rails, cedar snags and anything else they could find.

Things weren't much better for the Union high command.

Rosecrans had seized a ramshackle cabin for his battlefield headquarters on the Nashville Pike. His staff improved it by building a canopy outside with a bench and a warm fire. A thick mist arose early on the morn of Dec. 30, but the rain had stopped. Rosecrans finalized his battle plan sitting on that bench. After conferring with some of his corps commanders, he penned his general orders for the battle.

It was another bitter night for both the blue and the gray. The Confederates were particularly short on blankets ... not that a wet blanket was much comfort for a soldier already soaked to the bone.

As the north wind whistled, the Union command ordered troops to extinguish their campfires in an effort to confuse the Confederates.

It was another hard freeze with the Confederates rising at the crack of dawn with orders to attack the Union right wing. Out of the cold, gray mist moved Maj. Gen. J.P. McCown's Division, some 4,400 tough Texans and Arkansas soldiers shadowed by Maj. Gen. Patrick Cleburne's Second Division.

The first day of the horrible battle began. Night was to bring no respite from the suffering. Many wounded soldiers died from exposure. It was said some were frozen to the ground. The north wind whistled again and there was more rain.

"It was a gloomy night - gloomy long before midnight, when the gathering clouds stretched across the heavens and poured upon the contending army a deluge of rain, as if weeping over the slaughter," wrote Provost Judge John Fitch of the Army of the Cumberland.

"How many poor men suffered through the chill nights in the thick woods ... calling in vain ... for help, and finally making their last solemn petition to God!" said Col. John Beatty following a ride over the battlefield.

Then came the second day of the battle featuring Breckinridge's ill-fated charge across Stones River into the face of 58 massed Union cannons.

Finally, all that was left was retreat by the humbled Army of Tennessee that was whipped all the way to Tullahoma by more days of bitter, icy rain.

And yet, the situation facing the victorious Army of the Cumberland was scarcely better.

The bitter cold ended the career of Illinois Col. Nicholas Greusel, who had been brevetted for bravery at Stones River.

"He had been fighting for several days, and had no sleep nights, and on the night in question (Jan. 2), in company with Gen. Sheridan, occupied a brush shelter. The wind shifted during the night, and in the morning they were completely covered with snow, and he was unable to move, and was compelled to resign in consequence, Feb. 7, 1863," reported a biography of Greusel.

Finally, on the morn of Jan. 4, 1863, the storm finally broke. Murfreesboro was to remain in Union control for the rest of the war.