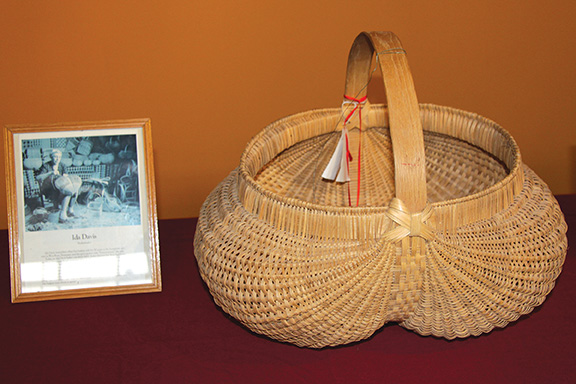 This basket was made by Ida Pearl Davis, the most famous basket maker.

Participants in the White Oak Basket Event Saturday (Feb. 28) found themselves wondering if they are practicing a dying art.

Crowds were small at the day-long event at the Arts Center of Cannon County but were equally enthusiastic.

"We had one group from Georgia who now live in Tullahoma and they are going to come back," said Dorothy Hobbs, a practitioner of the art who was in attendance with her sister Betty Tanner.

Back during the Depression, many Cannon County families turned to making white oak baskets as a way of making a living. The baskets were traded for lamp oil, sugar, coffee, cloth, thread and other items they couldn't grow. Those baskets, along with wooden chairs, ended up being sold in major cities like Detroit, Miami and New York City.

In the 1960s the white oak baskets made a comeback as newcomers wanting to get "back to the land" settled in Cannon County.
Basket weavers like the late Ida Pearl Davis spread the practice nationally serving as ambassador in the once-thriving white oak basketry tradition. Along with her daughter, Thelma Hibdon, demonstrated the art at the 1986 Smithsonian Festival of American Folklore and at arts and craft festivals across Tennessee.

Baskets made by Ida Pearl and her daughter, Thelma, were on display at Saturday's event. As were baskets made by Viella Thomas Estes, the mother of Dorothy Hobbs and Betty Tanner.

"This was the last basket she ever made," Betty said, holding a well-aged white oak basket. The weaving wasn't perfect because her Mother was suffering from Alzheimer's when she made it. We had a few splits ready for her and her hands just fell back into action," Betty smiled.

"It started raining and everyone was rushing to cover up the things they had for sale. We just kept working and laughing. The rain doesn't hurt our baskets," Dorothy laughed. "You can't work on them if they aren't wet."

Viella taught her daughters a number of country skills.

"Mama taught us a lot about sewing too," Dorothy said.

"We would work picking strawberries for our Daddy. When he paid us we ran to the 5 and 10 cent store in Woodbury and we would get a little bag of material," she continued.

"Mama taught us that we didn't need a pattern to sew an outfit. We would turn a skirt or dress inside out and would use that as a pattern," Dorothy said.

"It works and it's simple," Betty said encouraging a listener at the Arts Center. "Start with a pair of shorts. It's easy."

Weaving a white oak basket is easy too, but very time consuming, agreed Treva Horton, who was assisting Sue Williams of Morrison at her table of baskets.

"It takes nearly a week to weave a small basket," Horton said. "You really have to hang in there. It takes a long time."