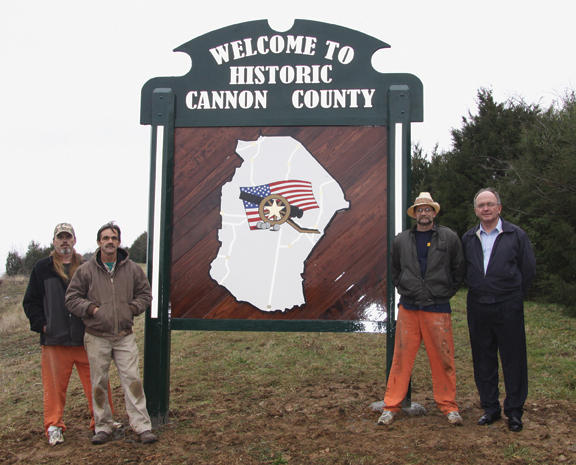 Notice the new "Welcome to Cannon County" signs popping up along the major highways leading to Woodbury?

"I've been in office 10 years and this is something I've wanted to do since my first day on the job," Gannon said.

That was before Gannon discovered the big price normally associated with a sign of this type.

So the sign project went to the back burner … until now.

That's when Gannon found out about the skills of two inmates at the Cannon County Jail.

Kronnick is an expert sign designer and artist. Sanders is a talented wood-worker.

"They built the sign from scratch using materials available in Cannon County," Gannon said. And they built it for way less than the projected $5,000-$7,000.

"We've got to thank Sheriff Darrell Young too for letting them work on the project," Gannon said. "One thing that helped us was the sheriff letting him (Kronnick) work in the jail's library.

"The DOT (Department of Transportation) is very particular and Sean knew exactly what was needed to meet their specifications," he continued.

Maintenance supervisor Fisher said he and the workers took great pains with the project including spraying multiple coats of finish to preserve the wooden sign for as long as 10 years.

Kronnick also hand lettered a new sign at the Cannon County Convenience Center. He took the design from a little magnet and painted the letters.

"What a great job," Gannon said.

"There's no way of knowing how much the inmates at the Sheriff's Department save this county every year," he said.

"The inmates take such great pride in their work. They are meticulous and very particular and you can't help but give them some praise. They are paying back society," Gannon said.

Some of them gain experience in an actual trade from working with Daryl Fisher, who has a good deal of expertise in painting, wood-working and other skills.

Print
Members Opinions:
[Delete]
I want to thank and commend all that were involved!
James Adkins
annonomoose
[Delete]
WOW! VERY NICE!! the community should be VERY PROUD of these signs. perhaps its a "sign" of POSITIVE rehabilitation going on at the jail.ALL who helped should be very PROUD of their work.THANKS!!!!
dphillip
[Delete]
I, too, would like to 'thank you' those involved. When I saw the sign on John Bragg Highway coming from Rutherford County, I said "WOW!". The signs are very, very nice and something of which to be proud. Thank you again.
[Delete]
Great work and thanks for all involved. Beautiful sign!
poplarbluff
[Delete]
Class...and great design....
wbrysoldier
[Delete]
Nice Sign! One more reason to be proud to be from Cannon County!
CHEVY
[Delete]
should have read shotgun county somewhere lol