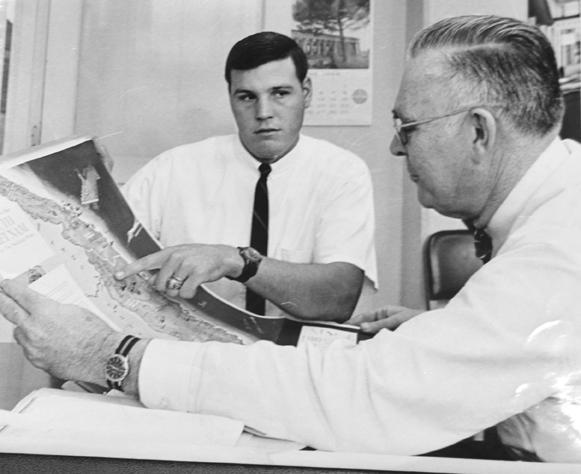 This is "young" helicopter pilot Britt Knox, showing his famous father, Nashville Banner editorial cartoonist Jack Knox (deceased), places where his chopper was shot out of the air multiple times in Vietnam.

Like millions of young Americans in the early 1960s, Tennessee National Guard soldier Britt Knox was determined to get in the action over in Southeast Asia in a war that was still popular with the American public the first half of that decade.

For the first time, this Vietnam veteran, at age 74, shares publicly the loss of comrades and his miraculous escape from serious injury when multiple helicopter gunships were blown out of the sky.

The present-day resident of Woodbury spent the better part of four years training and angling to serve in the conflict that was more and more in the news of that era.

Knox, being the son of famous Nashville Banner newspaper cartoonist Jack Knox, had no trouble keeping up with latest news flowing back and forth to America about the growing conflict.

After determined efforts, Knox was finally invited to the Pentagon for consideration.

How determined was he? So determined, the soldier sneaked inside a Pentagon restroom to "remove civilian medical records" that might have kept him out of helicopter flight school training. It had taken years of training and making contacts for Knox to get to the Pentagon for consideration for flight school.

Knox, whose wife is Woodbury City Councilwoman Faye Northcutt- Knox, was concerned that severe head trauma in an automobile accident as a boy might keep him out of flight training.

"An officer who greeted me at the Pentagon, where I was applying to fly helicopter war ships, left the room, leaving my complete medical records' file, that including a car wreck I'd been severely injured as a boy back in Nashville," Knox said in retracing his youthful determination to go to 'Nam in the 1960s.

"I recall thinking, 'I can't quit now,'" Knox recreates his journey to Vietnam. "So I pulled all my negative civilian medical records and destroyed them down a Pentagon latrine, destroying anything that could ultimately have kept me out of Vietnam."

By 1965, Vietnam was really heating up, involving American forces."

Upon clearing this last big hurdle to get into a war zone after ultimately completing flight training, Capt. Knox was finally arrived at Saigon on Nov. 20, 1966.

Soldier Knox had not always believe in the power of prayer.

But after multiple choppers were shot out from under him in Vietnam, the former pilot is a devout praying man.
"There's no explanation, why some in my helicopter unit perished, and why some lived in the seat right beside me," noted former Unit Commander Knox. "I do think it was my mothers' prayers, along with my great siblings, that helped got me through the war."

After one gruesome attack on his chopper, when a blast of enemy 50-caliber machine gun bullets ripped the chest of a Korean Army officer accompanying Knox in on a mission.

"More than once when our chopper was hit, I'd ask myself, 'Am I dead?'" Knox recalled. "Enemy fire, from a 50-caliber machine gun, blew past my head, and instantly killed that Korean officer standing behind me."

Upon finally getting to Saigon on Dec. 3, 1965, Capt. Knox was anxious to get into the action.

"But, it rained, and rained and rained," Knox recalls. "We stayed on the ground. I was going crazy. This was not I was trained to do.

"Finally, on Dec. 7, we got a mission. I was a captain by this time. One of our gunnery teams had got pinned down by the enemy up in the mountains," Knox recalls. "I recall the turbulence being so bad, we were actually trying to extract our soldiers from the side of this mountain."

That was the beginning of more than 1,520 flight hours and 120 missions that Knox would eventually fly.
(Writer's Note: The second and last part of this series will share in detail, the multiple harrowing times that Knox and air crews had their choppers shot out from under them."