Walkups get surprise from Ellen DeGeneres 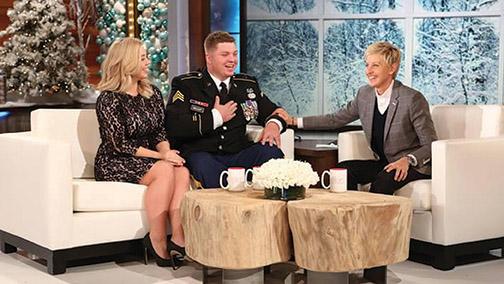 Woodbury's Sgt. Franz Walkup and his wife Shannon received a big surprise from Ellen DeGeneres this week on her TV talk show, "Ellen."

Ellen presented the young couple with a plant for their new home being planned near Woodbury.
Inside the oversized planter was $15,000 from Shutterfly and Franz had a surprise for Ellen in return. He presented her with his Purple Heart Medal.

Back in Woodbury, friends and family were stunned by the news. Unfortunately, that episode of Ellen was knocked off the air by President Obama's visit to Nashville. They turned to the Internet to see the segment, which included Franz standing and dancing in joy.

"Last night was very special to us. Last night Franz and I were lost for words. I can't share many details yet but WATCH ELLEN TODAY!!!!," Shannon posted on Facebook.

DeGeneres caught wind of Franz Walkup's inspiring story, so she invited him and his wife to the show, which recounted two important episodes of his life.

In 2007, Sgt. Franz Walkup learned his soldier brother, Frank Walkup IV, had been killed in Iraq. To honor his memory, he decided to enlist in the army to keep his memory alive.

Sadly, during his second tour in Afghanistan, Walkup was critically wounded. He was shot five times by Afghan Army soldiers and was told he may never walk again.

But Franz never gave up and eventually after two years he is now walking, but still must rely on his wheel-chair.
DeGeneres learned the veteran was trying to build a wheel-chair accessible home, so she decided to give them a life-changing house warming gift.

Both Walkups were stunned by the gift. Franz grew emotional, wiping tears from his eyes, and in return he presented his Purple Heart to Ellen.

"Thank you doesn't express how thankful we truly are. Its the type of thankful that leaves you speechless. All of the support has took us by surprise. We never imagined that sharing our story and experience with WUSA 9 (a Washington D.C. Area TV station) would give us mind-blowing opportunities! If a couple of things follow through Franz will have a ADA home in 2015!! Now lets start the new year!!!!" Shannon posted.

Since the broadcast, more news has developed.

The Gary Sinise Foundation has joined the effort to help build the Walkups' new home. Sinise, an actor best known for his role on "CSI: New York"and for portraying "Lt. Dan" in the movie "Forrest Gump," has gone to extraordinary efforts to raise funds for veterans. To make a donation go to http://donate.garysinisefoundation.org/