Walking with God on Short Mtn. 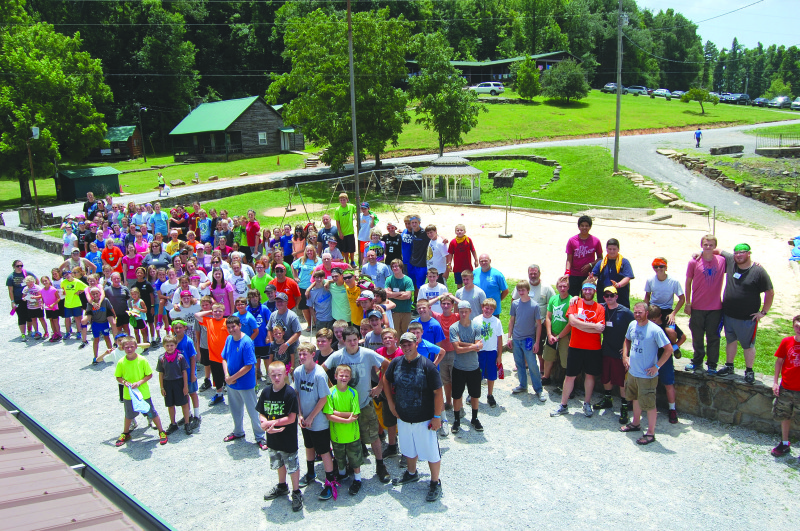 Youngsters gather before the dining hall.

At an elevation of 2,074 feet, Short Mountain proves nearer to heaven than any place in Middle Tennessee.

From this lofty retreat on a clear day a visitor with acute vision can spy the peaks of Nashville skyscrapers some 55 miles to the northwest.
Every summer for the past 61 years, here in a clearing near the mountaintop hundreds of youngsters have found themselves growing closer to their Maker.
Cell phones, TVs, radios and DVD players are taboo at Short Mountain Bible Camp, but visitors will observe every child carrying a Bible several times throughout the day.

"We use words all the time like 'heaven on earth' or 'kind of like the Garden of Eden.' This is home for these kids. They come back every year to a safe place with their friends. They stay connected and count down 'til next year," said Darrell Duncan, who has co-directed Cannon County Week with Tim Knox since the 1990s.

"What we shoot for here is that children will experience spiritual growth, a sense of family and a time of reflection. We want this to be a positive fun experience in a week of their life," said the minister of Center Chapel Church of Christ in Mt. Juliet, who also teaches at Merrol Hyde Magnet School in Hendersonville.

"Every week a different church is in charge. The majority of kids here this week, ages 8 to 17, are from Cannon County. It takes a lot of people, a staff of 60 to 70, to take care of 190 campers. The camp provides food, facilities and the lifeguard," said Duncan, noting that the majority of the staff are volunteers, including the counselors, ranging in age from 18 to 60-something.

Cannon County Churches of Christ represented this week include congregations from Woodbury, New Hope, Wood, Curlee, Smith Grove and Leoni, but also in the midst of the fellowship are children from churches in Rutherford, Wilson, Coffee and Trousdale counties.
During the other seven weeks of camp, children came from congregations in Warren, White, Maury, Putnam and Coffee counties and from West Nashville and Walter Hill.
"The mountain is just a special place," says Darla Cunningham of Milton, a member of the Woodbury Church of Christ, who has returned for her fifth summer as a counselor. "I feel like you can get closer to God here because you get away from all the hustle and bustle of everyday life and focus on what you need to focus on, and seeing these kids smile. We had a 9-year-old girl tell us last night that this was the best time of her life."

During the week the children, who are divided into 10 teams, each designated by different-colored bandannas that they wear, play games like volleyball, ultimate Frisbee and basketball, hike trails, swim, ride horseback, canoe and create arts and crafts, but the focus is on Bible study twice a day.

"We're very blessed this week to have all these ministers, eight of them, all teaching and counseling in the cabins. Some of the campers get to know the ministers. It's their first time to see their minister in jeans. When you live with people for a week you get to know them," Duncan said.

"The children are gonna get eight Bible classes, five nightly worships and have a chance to ask questions. They need to know things about the Bible, and kids have to learn to communicate. We'd like a kid to leave better than when they came. Some will be baptized here."

Indeed, 22 campers will be baptized by the end of this week, seven were last night, including Evan Alley, 14, a home-schooled freshman from Mt. Juliet.

"I had been thinking about it for a while," said Alley, "and last night a bunch of my friends were sitting in the back part of my cabin talking to our counselor Justin Reed. One of my friends talked to me about being baptized, and said, 'I love you so much. I'd hate for you to go away and not be saved tonight.'"

Recollects Duncan, "I got a knock on the door at 30 minutes past midnight, and 35 to 40 campers witnessed Evan's baptism."

"It was very cold. It felt great," said Alley of his plunge into the 3-foot-deep baptistery, a circular tank made from native stone, filled with cold spring water. "I know it's going to be the best decision I ever made."

Co-director Knox, youth minister for the Woodbury Church of Christ and assistant principal at Coffee County Central High, says of camp, "There's something for everyone. We pack so much into a day. It begins at 7 a.m., and they won't go to bed until 10:30 or 11 p.m.

"Every year we have a theme. This year it's 'new beginnings.' So we have worship every night and a lesson together. There are class lessons morning and afternoon taken from the Bible, and they have to do with new beginnings," said Knox, noting that the teachers get their assignments six weeks in advance along with the scriptures and life applications that they will adapt for their age group.

"We will have young men college age to share how they became a Christian, their walk. They each have a different perspective. Some were raised in the church, some weren't.

"It always comes down to the kids here. It is so much fun to see smiles on their faces in an atmosphere so spiritually charged. I love everything about it. For some of them, after they leave here, there's no spiritual influence at all."

Bryson Bell, 14, a freshman at Cannon County High School, is eager for the football season to begin. He lives in Woodbury and attends Hollow Springs Community Church. Back for his sixth year at camp, he says, "I come here to get away from the world, find myself and get closer to God."

Settled with six campers and four counselors in the Rising Sun Cabin, which has one air conditioner and a fan, he said, "I'm friends with just about everybody. There's a whole lot to do. And the food's great. The spaghetti last night was amazing."

This was the initial visit to camp for Woodbury's Mykala Barrett, 9, a member of the Elkins Church of Christ.

"It's been fun hanging with my friends and all that. Riding horses is the most fun," said the Eastside Elementary fifth-grader. "We've heard about Moses and John and been reading Matthew today."

Ralph Richardson, minister of the New Hope Church of Christ in Readyville, was back for his second time as a counselor and brought eight children from his congregation.

"I already have some who expect to come back here next year. They're talking about how being here on the mountain with like-minded people that they're not alone and that helps them to grow. It's a growth process. It's awesome to be a part of making a difference in a kid's life," he said.

Jerry and Penny Nash reside atop Short Mountain and have served as caretakers of the camp property for the past 10 years. The Bible camp, which once occupied 750 acres, is down to 400, the camp taking 65 to 70 acres and the rest lies in forests of sugar maple, walnut, black gum, buckeye, tulip poplar, hickory, oak and redbud and pasture. A 1½-acre pond presents an ideal spot for fishing, canoeing and kayaking.

"I didn't even know the camp was here until 2000," recalled Nash. "But the word is getting out there with social media and Internet. People read about the baptisms and are inspired by the children's lives we touch. We average from 35 to 40 baptisms a year, and I would estimate 1,200 have been baptized here since the camp began.

"We had 400 on the mountain last night for our service," Nash said, referring to an overflow of guests who drove up from Woodbury for the Wednesday evening worship assembly. "Last year we had 1,501 in attendance [for the total camp sessions)."

Another 1,500, either church groups or families, will use the camp facilities for retreats during the year when camp is not in session. It is fully booked until the end of this year.

"We have from 20 to 30 churches that donate yearly to the camp, and at least 100 churches will sponsor a child so he and she can come to camp," said Nash, who puts in a good word for Buddy and Mary Duncan of Woodbury, who serve as maintenance plumber and kitchen manager, respectively, during the weekly sessions.

The seed for the camp was planted in the mind of Woodbury physician Dr. J.F. Adams by Vardaman Forrister, a minister of the Woodbury church. After a group toured the mountain, investigating it as a possible site, Adams told a group of Christians gathered at the Woodbury Church of Christ in December 1952, "This mountain is something special! God has given it to me for some purpose. In searching out that purpose, I can think of no better use to which it could be put than in some use for young people, such as a Christian camp."

According to a history on the camp's web site, the first public meeting on the campgrounds was Labor Day 1953 as approximately 150 people from 20 congregations gathered and made plans for development of facilities.

The first year of operation was a 10-day session for boys in the summer of 1954. Mr. and Mrs. Charles Davis were the first directors. The summer of 1955 offered two 10-day sessions, one for boys and one for girls. In 1956, Gertrude and W.H. Bill Brown, known as "Mom" and "Pop" Brown, took over as directors, roles they filled for many years.

Darrell Duncan adds a bit of more recent history, sharing, "There was a time in the mid-1990s when Cannon County prisoners came and cut lumber and milled it. They finished out the lunchroom with cedar and did stone work in the wall in the winter. In return their kids got to come to camp, so there's a lot of work and love in this room."

Duncan's wife Tracy, a Woodbury native, started coming to camp as a counselor through the encouragement of preacher Herb Alsup, who, coincidentally, is Darrell's uncle. She helps with administrative duties and edits "The Short Mountain Bible Camp Screamer," the newspaper which goes into each camper's mailbox daily.

"This is where Darrell and I met, and the first time he ever kissed me was at the Short Mountain fire tower and that was where we got engaged," said Tracy.

Luke Blanton, 19, also a Cannon County native and a member of the Woodbury Church of Christ, cherishes a special connection to the place.

"My grandma, Lois Lariner, used to cook up here. I would come up with her, and that's when I began to experience the magic," said Blanton, now a counselor, who became a camper here at the age of 8.

Earlier this year his family planned a vacation to Hilton Head on the Atlantic Coast..

"So I told my family. 'Hey, I'm gonna go to Bible camp rather than Hilton.' I've only missed one year, and I wouldn't miss it for the world. This place holds some of my best memories," said the joyful Blanton.