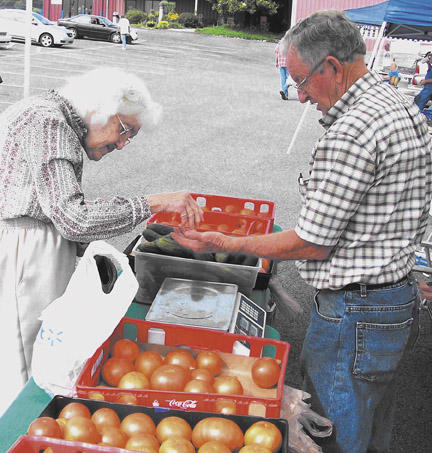 Polly Campbell reaches to pay for the tomatoes she bought from local grower Harold Duggin at the Cannon County Farmers Market.

By CONNIE ESH/ Special to the Courier

Cannon County Farmers Market is about as close as you can come to "taking a salt shaker out in the garden" to eat fresh tomatoes.

Tomatoes, especially, are better when they're home-grown, opines Jerry D. Smithson as he sells tomatoes, summer squash, eggplants and other fresh-picked veggies every Saturday morning at the Farmers Market.
"I like a good acid tomato that tastes like a tomato," he says. "Used to, you could go the field and eat 'em right out of the garden. I'd take a little shaker of salt for them."

Why doesn't he do that anymore? "I've just started eating them in the house-it's cooler."

But on Saturday mornings, Smithson and other local farmers offer that sort of convenience combined with garden-fresh quality to the general public by bringing their produce to the market in the Arts Center parking lot at 1424 John Bragg Highway.

They pick the vegetables the day before and pack them during the night or early in the morning to have them available beginning at 6 a.m. each Saturday to sell. But even though the Farmers Market stays open till around noon, don't wait too late to come get yours.

By 9 a.m. or so, better than half the veggies are sold, and the local growers are grateful.

"I'm lucky I can come here," says Harold Duggin, with tomatoes, cucumbers, and other veggies lined up for sale under his tarp at the back of his pick-up truck. "I brought about 220 pounds (of tomatoes) here this morning." Now, by around 9:30 a.m., he has about 80 pounds left "so far-I hope to move these before dinnertime."

Duggin and his wife Earlene, both Cannon County natives, are retired from work in local shoe factories. Duggin also worked about ten years for the Farmers Coop in Woodbury. But now they raise and sell produce.

"It keeps you out of the chair," says Earlene. Her husband adds, "A human's like a machine-you've got to keep it oiled."

Harold Underwood sells his produce nearby. He grew up in Homestead in southern Florida, but he moved to Cannon County in 1984, two years after his daughter married and settled here. Underwood's wife Dorcas is a native, but her parents had moved to Homestead when she was in high school.

Possibly the oldest farmer at the market, Thurman Bogle, 83, says he's been raising veggies for sale "a pretty good while. I done it when I was a kid. I drywalled for a number of years, then I retired and went back to doing it again."

As a child, he was not tending the vegetable crops by himself by any means, however-it was a family affair. "Our dad kept us busy when we was kids," Bogle recalls. "There was eight boys, and all gone but three."

Bogle was one of eight boys and two girls, plus another brother who died young. They raised vegetables for a living. "It was all my dad knew. He farmed and truck-farmed. When he done it, he'd go to Murfreesboro and sell from store to store. You could sell to a store, then," Bogle recalls.

Besides his prize cantaloupes and baskets of fresh-dug beets, Bogle was selling beets he had pickled and canned himself for $5 a pint. "I'd bring 'em to market to sell, and those that didn't, I'd can 'em," he says, describing his beet-selling efforts earlier this summer. When Bogle was a child, "Mom was crippled up with arthritis, and we had to learn to cook," Bogle explains.

In the 1950s, when Underwood lived near Homestead, Fla., Bogle used to come down there to do farm work, but the two veggie farmers never met until after Underwood moved to Cannon County, Underwood recalls: "It's a small world. We both lived down in Florida, and didn't bump into each other."

Bogle replies, "We have bumped into each other, now."

"I worked for a farmer down there" in Homestead, Bogle explains. "We'd go down there and spend the winter, and come back in the spring. We picked beans, we put out beans-we planted a lot of beans. They shipped them out fresh. There was one great big, long one, and I put my name and (Cannon County) address on it. The next spring, I got a letter from a man in Texas-he found my prize bean."

Truck farming is a family tradition for Underwood, too. "I got dirt in my blood," he says. His family has been truck farming for several generations. "My daddy, my grand daddy and all my uncles grew vegetables down there," he adds with a soft southern drawl. "I can't quit, so I just keep doin' it."

His grandson Kyle Klingler plans to follow the tradition, too. "I always worked it growing up, but I want to raise cattle - there's a little more money and the work's easier," Klingler says. "Vegetables are all hand labor. But you work cattle about once a year, then you sell them."

Harold Duggin agrees, "Nothing's easy about growing vegetables 'til you get it sold. You're either planting, weeding, or harvesting. It's all hard work."

But this year at least, he's had a little luck with water. After last summer's drought, he bought eight soaker hoses and put one down between each row. "We haven't had to use 'em," he says. "The good Lord watered 'em every time they needed it."

Roy "Lynn" Parsley was short-handed last Saturday. His daughter Lindsay was showing chickens, but he brought her fried pies to sell anyway: cherry, peach, and apple. They were almost all gone by 9. His watermelons had long since been snatched up by buyers.

"I wish you could have seen my melons," Parsley adds with a touch of pride. "I had 50-pound melons."

By about 10:30, Parsley sold the last of his heirloom purple-hull peas to Dorothy Elrod from Readyville. "I don't know what you call them (the peas)," she says. "But they're really good when you shell them out."

You can't eat the pods, Parsley explains, but they cook up like tasty soup beans. "You have to shell 'em," he says. "Some people call 'em pink-eye peas."

Jerry Smithson says one of the advantages of the Farmers Market is the availability of heirloom veggies and varieties that aren't available in the supermarkets. Plus, he prices his produce competitively.

"These go for $2 a pound in the store," he says of his baskets of variously shaped and sized eggplants. "I get $1.50. I try to stay under the stores." Smithson either recommends or prepares eggplants cooked a number of ways, including in lasagna or "fried like squash."

Smithson sold some of his eggplants last Saturday to Mary Van Trease of Auburntown's Cooper Holler and her husband Charles. They visit the Farmers Market "every Saturday, just about," Charles says, instead of raising a garden: "I did have one, but I give it up. The rabbits got to it before I did, usually. It's about as easy to come over here and buy it as to raise it."

Like Smithson, Parsley has interesting veggies for sale, too. His small, white "patty pan" or "flying saucer" squash are tasty sliced and fried with new potatoes and onions, he points out.

He's been selling his veggies at the Farmers Market for seven or eight years now, through three moves. First, he says, there was a market across town, then it was on the square and now it's at the Arts Center, but he and the other farmers are hoping the market has made its last move.

Building is underway to complete a new pavilion to cover the Farmers Market."We've been working on it for three years," Parsley says, pointing to the foundation and lumber at the planned site. "We even went to the state legislature to get the grants."