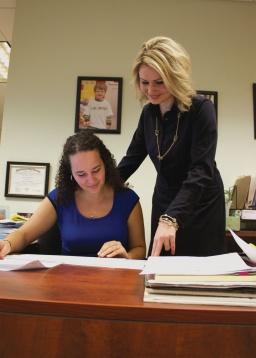 When the head of United Way of Rutherford and Cannon Counties announ-ced he was leaving, the local nonprofit announced it would mount a nationwide search to find its next leader.

That search led right back to Rutherford County and straight to Meagan Flippin.

"I'm excited to work with the United Way in a new way, in a new role," Flippin said. "It's going to be a new challenge for me, but I'm excited about it."

Flippin has worked as the marketing director for the United Way for the past three years, where she has worked to brand the charity to charities and make it more relevant to the community at large.

This was former Chief Executive Officer Brian Hercules' goal when he took over the struggling nonprofit in September 2009. He left in December to become vice president for economic development of the Rutherford County Chamber of Commerce.

"The United Way had a reputation in the past for just being a fundraising organization," Flippin said.

Hercules said he wanted to develop transparency at the United Way and a sense of ownership in the community.

"Because the community invested its dollars, we wanted to say, 'This is what we did with your money,'" Hercules explained. "Not just, 'We raised this money and gave it away.'"

Continuing the United Way's new focus on outcomes and not output is Flippin's main goal in her new seat.

"We are focused now on providing opportunities for the community in our focus areas (education, income, health and rebuilding lives)," Flippin said.

This has been accomplished by identifying community issues and problems, finding agencies to address to issues, and developing a plan of action. This has made the charity more results driven, she said.

Those issues and problems will be uncovered over the next year or so by a Community Assessment Project, which is sponsored, in part, by the United Way, the Chamber of Commerce and MTSU.

It will gather input from various sectors of the county's population to guide leaders in targeting areas to improve residents' quality of life.

From there a plan of action will be developed to address issues across all of Rutherford and Cannon counties.

"We measured output in the past, not outcomes," she said.

But now the United Way has a new focus on being a something in which the community can invest.

"We have set a precedent for being accountable and transparent and good stewards of the community's donations ..." Flippin said. "I want to work with the best business practices possible so people know this organization belongs to them."

Flippin pointed to Cannon County as the first place she'd like to create a sense of ownership.

"We are working on expanding our presence in Cannon County ..." she said. "It's important to focus of Cannon County because we are the United Way of Rutherford and Cannon Counties."

Hercules said he can't think of anyone more qualified to guide the United Way through this next phase than Flippin.

And the board of directors must have agreed.

"Meagan has performed exceptionally at a Senior Director level for us and has an impressive skill set to help lead us forward," said General Mills Plant Manager Pat Murphy, who led the search committee responsible for Flippin's selection. "There were other outstanding candidates, but Meagan's vision for where she would like to move our United Way really helped elevate her in our selection."