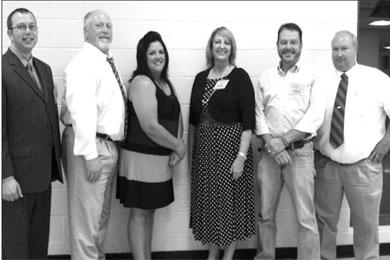 The Upper Cumberland District meeting was one of nine similar sessions held annually in each of TSBA's development districts. The evening's program included an update on this year's session of the Tennessee General Assembly, a discussion of the Common Core State

Standards by the Tennessee State Department of Education's Common Core Leadership Council, and a review of the superintendent evaluation.

Board members also participated in a legislative survey with their electronic devices via an online/SMS texting program. The meeting included recognition of school board members who have achieved honors over the past year, a local school volunteer who is a finalist for a grant to their school of choice and a local student who is a finalist for a college scholarship given by TSBA.

AREA STUDENT HONORED
Each year TSBA honors one student from each of its nine districts who has achieved distinction in the areas of academics, community leadership, and engagement as part of its Student Recognition Award program.


One of those nine students will win the statewide Student Recognition Award to be presented at the TSBA Annual Convention in November, which will include a $2,000 scholarship.

The 2012 Upper Cumberland District winner is Erin Cantrell-Pryor of DeKalb County Schools. Currently a senior at DeKalb County High School, Erin has been active academically as well as possessing a high degree of volunteerism within her community.

Erin is working to attend college and plans to major in Chemical Engineering with a minor in Environmental Engineering. Erin has participated in science fairs since elementary school, winning numerous awards. She continued her interest in science by winning first place in the DeKalb County High School Science Fair and an honorable mention at the Tennessee Tech Regional Science Fair.

She was selected to serve as President of the Freshman Class and served on the Student Council and the 4-H congress.