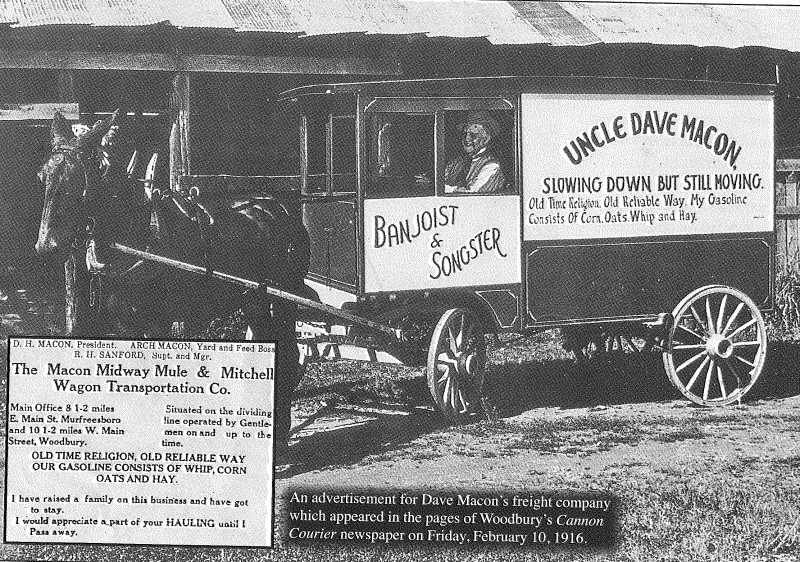 MURFREESBORO - History echoes here loud and clear ... "Let 'er go boys" ... due to the Uncle Dave Macon Days that annually brings thousands of fans to the geographical and musical heart of Tennessee.

Thanks to Uncle Dave, notable musical history also lives at Woodbury, Readyville, Kittrell and the small immaculately-kept Coleman Cemetery which was the final resting place of the music-making legend who helped popularize country music in general, and the Grand Ole Opry specifically.
Due to Uncle Dave's great-grandson, Dr. Michael D. (Mike) Doubler, that history is being preserved in a book soon to be published: "Take It Away, Uncle Dave!: The Life and Music of Uncle Dave Macon."

Author Doubler also recently published a pictorial history of Uncle Dave's life that will be available at the upcoming Uncle Dave Macon Days, July 10, 11 and 12 at Cannonsburgh Pioneer Village in Murfreesboro.

Author Doubler describes his motivation for chronicling his famous great-grandfather's life: "Uncle Dave Macon was the first superstar of the Grand Ole Opry, and an immortal in the annals of old time and country music. Middle Tennessee State University music historian (the late) Charles Wolfe labeled him 'the Elvis Presley of his day.' At the local level, Uncle Dave was arguably the most famous resident in the history of Rutherford County."

Uncle Dave was born Oct. 7, 1870, at Smartt Station in rural Warren County, the eighth of 11 children born to Martha and John Macon after the family moved westward out of North Carolina.

"Young Dave exhibited musical talent at an early age, learning to play the guitar," the great-grandson writes. "When he was 13, Dave witnessed an entertainer playing a banjo at a carnival sideshow. The sound and tempo fired his imagination and he begged his mother to buy him one of the instruments. By the time he was 16, the teenager was captivated with the banjo."

Doubler paused in the interview, as if to gather his thoughts ...
"I'm sad to confirm this aspect of Uncle Dave's life, other than his mother, family members didn't do a lot to encourage Uncle Dave in his music career," the author shared. "At best, family sort of took him and his music for granted."

As a professional musician after becoming the first superstar of the Grand Ole Opry, Uncle Dave had up to seven banjos he used in performances. There was a rhythm to his music and stage performances ... called "entertaining."

Performances, including Uncle Daves' jokes and story-telling, could last up to one hour or more.

How many banjos does the family have today?

"None, but there's a gentleman locally, who has perhaps the icon banjo of Uncle Dave's collection," Doubler verified. "I'd like to trace down the historical instruments."

Uncle Dave never had a business manager or a professional promoter.

"He never learned to drive, and regularly hired neighbors or friends to chauffeur him," Doubler shared. "He learned the value of providing short free shows at schools in order to convince the children to attend the advertised event later that evening with their parents."

Before there was the Grand Ole Opry, the Macon family moved from Warren County to Nashville.

"Using their life's savings and proceeds from the sale of their home (Macon Manor at Smartt's Station), the Macons purchased the Broadway House hotel in downtown Nashville," in the late 1800s, accounted author Doubler. "The family took up residence in the hotel in order to manage and operate the property."
Was "Broadway House"Uncle Dave's professional launching pad?

"The Broadway House was a favorite stopover for entertainers coming to Nashville by train and steamboat," Doubler reported. "An unfinished basement offered an ideal, spacious venue for bands and single musicians to rehearse. When not busy as a hotel clerk, Uncle Dave listened to and observed all the visiting musicians ... engendering a love for music and an appreciation for the craft of entertaining."

During that era, John Macon had an altercation with a man, who stabbed him with a knife, a fatal wound. This eventually caused the family to move out of Nashville to rural Readyville straddling the Cannon and Rutherford County line.

"Bitter over her husband's killing, and the acquittal of his assailant, Uncle Dave's mother sold the Broadway House and left Nashville for good," Doubler confirmed. "She eventually located a desirable property in adjacent Rutherford County, known as the The Corner's on productive farmland in Readyville. The Corners was an overnight stopping point for stagecoach lines as well as an inn. Martha Macon continued to provide those services with the help of her younger children."