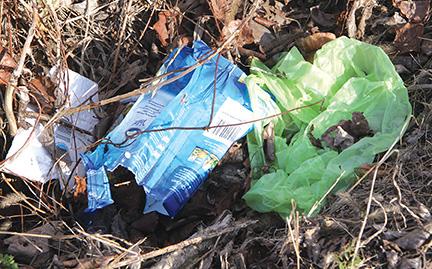 Why should Cannon County residents care about litter?

Last week work crews from the County Jail picked up a tall, truck-load of litter between Woodbury and the Cannon/Rutherford County line. Some of the litter blew in from elsewhere, but most of it was tossed out of cars and trucks driving up and down John Bragg Highway.

Already, more litter is beginning to pile up along that stretch. Litter is already a problem on the new four-lane stretch of 70S between Woodbury and McMinnville.

Some $11 million tax payer dollars are spend annually picking up the trash Tennesseans throw down on the ground. That doesn't even count what Woodbury and other municipalities pay to pick up litter in the incorporated areas.

12 million miles are driven each year picking up litter in Tennessee. Think about all the gas that is needed to fuel trucks for litter pick up.

Some 18 percent of all littered items end up in our streams and waterways as pollution. In Woodbury, drinking water is pumped from Stones River.

How can an individual help?

First of all, don't litter. You can also report litterers by phone or by email to the state of Tennessee.

Call 1-877-8-LITTER or fill out the complaint at http://www.tdot.state.tn.us/environment/beautification/litter.asp
All that is needed is some basic information like date, time, location and license plate number and the state will take care of the rest.

The new Tennessee Litter Law is designed to help reduce some of that trash. Smaller amounts of litter will be punished by a $50 fine, while larger fines are reserved for larger amounts.

Offenders can mail in the payment to the county clerk or plead not guilty and face the officer in court. If the judge finds the offender guilty, the person must pay the $50 and court costs.

Littering, including on the roadside, can carry as much as a $1,500 fine.