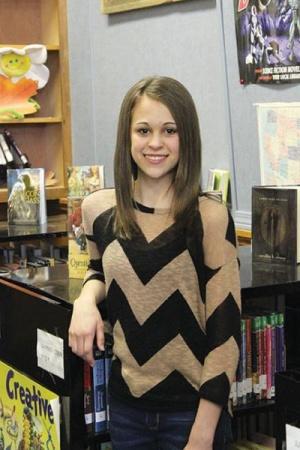 Mackenzie Turney is the latest in a long line of successful Auburn School students who have shown brightly on the Tennessee Junior Beta stage.

Turney, the daughter of Todd and Susan Turney, became the fourth Auburn student to win a state office at Junior Beta State Convention in Nashville. She finished first in her bid to become Tennessee’s Beta secretary.

“It was very exciting to run for office,” Turney said. “I love (representing Auburn). It was so much fun to be part of it. I liked the attention too. All the kids were coming up to me and telling me how well I did. It felt good being like a role model.”

“I was kind of nervous, but I felt pretty confident that I would win state,” Turney said. “It’s not that I am boastful or anything, but I was pretty confident just knowing that I have such an awesome personality.”

Prior to Turney, Lance McAllister, Kayla McReynolds and Marshall McReynolds each won in their candidacy for a state office. Both McReynolds went on to win at the national level, as well.

Why are Auburn students so successful?

“I think most of it is the environment,” Turney said. “The teachers really encourage the kids and we learn so much. The personality is born there. It is just a fun-loving environment.”

Dianne McAllister who, along with faculty member DeAnna Reed, serves as Auburn Beta sponsor, said expectations for students are high.

“We expect them to be successful,” McAllister said. “I tell our students all the time that they are all smart, gifted and can do anything they want to do. It’s up to them. We expect our students to do their very, very best and behave in a certain way. We just don’t have many problems.”

The decision for Turney to represent not only Auburn School, but also all of Cannon County, was actually made at the state convention in 2013.

“We basically knew all year,” McAllister said. “If you have someone interested and who is a good speaker and you know they will do a good job, you usually contact (Junior Beta sponsor) Darryl Deason and let him know we have someone who would like to run. He puts them in the slots that he wants.”

McAllister believed Auburn School had the perfect candidate in Turney, and she didn’t disappoint.

“I was very excited to do it. I wanted to do it,” Turney said. “I am very outgoing, and I can speak in front of someone a lot. I tend to talk a lot. I smile a lot. I’m not very shy. I guess my awesome personality allowed me to be a good candidate.”

“She is an outgoing personality,” McAllister said. “She will talk to anybody and you have to be that way. You have to make those other guys that are your age vote for you. We have also found it is important that when they give their speech it needs to be a funny speech. We never do anything really serious. We always have a skit that is kind of out there.”

The skit included a big Mack truck, sumo wrestlers, and a Scooby Doo van, amongst others. It supported Turney’s speech to perfection. The Mack truck idea originated from her name, ‘Mack’enzie.

“The speech matches the skit,” Turney said. “You can’t really understand the skit without listening to the speech. The speech is pretty much about the different candidates you could have and why you should pick me.”

For example, Turney said you could have a really small candidate, which made all the girls ahhhh.She followed that up by saying those candidates are usually in “short” supply.She said the athlete candidate may “run out of steam.”

And then there is the bold, confident candidate.

“That person is someone as subtle as a Mack truck,” Turney said. “At that point, all of the other candidates had tried to run over the sumo wrestlers and bounced off of them. The Mack truck just flattened the wrestlers. The kids loved it. It was pretty much saying I can go the distance and lead the Beta Club. Each of those ideas is symbolized in the skits.”

Turney and Auburn students involved in the skit will perform again at the National Junior Beta Convention in Richmond, Va., this summer.

She hopes to become the third Auburn School representative to win a national office.

“Mackenzie is very motivated,” McAllister said. “We are excited about her and all of our students.”

---Auburn School also wanted to send out a special thank you to Huff and Puff Trucking, which has agreed to transport all of the props for the campaign skit to Richmond, Va., for the National Convention at no cost.