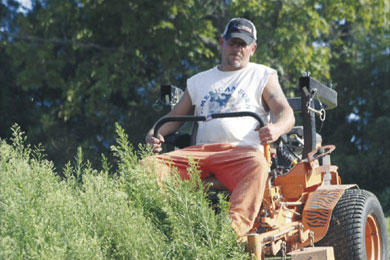 Bobby Cobb mows grass outside CCHS.
Just because a person makes a mistake somewhere along the way doesn’t mean the individual is incapable of being a productive citizen and giving back to society.

This is the philosophy of the Trusty program within the Cannon County Jail System, where convicts are regarded as worthy of trust and granted special privileges based on good behavior, according to Sheriff Darrell Young.

These liberties are not the day-to-day privileges most Americans enjoy – shopping, dining out, and taking walks.

The privileges enjoyed by trustys require work and manual labor. You have likely seen some of Cannon County’s trustys during your daily routine.

These inmates are dressed in orange and can be seen doing any number of jobs throughout the county under the supervision of Ed Brown, jail administrator, or Daryl Fisher, county maintenance director. Just last week they were cutting weeds on a hill at Cannon County High School that had become so high it required multiple workers that spent more than two hours manicuring it.

“This is (the trustys) way of giving back when they can’t just reach into their wallet and give,” Young said. “They go out of their way to do good work. They go above and beyond on the work they do to help people. They have a lot of pride. These guys will work as long as you will let them.”

“It makes you feel better about things when you do things to help others,” said Steven Ratliff, who has earned trusty status through good behavior and diligent work during incarceration. “We do a lot of things that probably wouldn’t happen if we weren’t there to help, so I’m happy to be part of that. You may be incarcerated but you get to do things to help people and that’s good. We are helping to make sure Cannon County is a good place to live and that it is a nice place.”

Work throughout the county accomplished by trustys is not limited to landscaping around the high school. These trusted individuals also have been responsible for doing work throughout Cannon County in order to assist organizations and governmental agencies whose work force is not great enough to accomplish the tasks.

“It makes you feel good that you are doing something to help others,” said “Wolf,” who has been an inmate in Cannon County Jail for three years and sees the program as a positive. “I’ve been locked up three years and it kind of was messing with my head a little so I am grateful to the Sheriff for getting me out and getting me use to the outside. It can help me for when I do get out.”

Brown does not ask for volunteers.

These men and women must earn the opportunity to leave the jail and work to improve the community. They are considered reliable and faithful. They prove they are capable and ready to become productive citizens upon release and their time served as trustys is a step in that direction.

“Everybody doesn’t get to do this. You have to be good inside to get to come out and work,” Ratliff said. “It is our way of being a vital part of the community. We have made mistakes but we are willing to work through them and pay back what we have done. You may be incarcerated but you get to do things for people.”

There also are consequences for trustys who don’t fulfill their responsibilities.

“If you get out there and don’t do what you are supposed to do and you lolly-gag around then you come back to the jail and you aren’t getting to do it again,” Ratliff said. “You are staying inside. When (jail officials) put that must trust in you then you owe it to them to get out there and do a good job.”

By all accounts, Cannon County trustys do a good job not only to remain within the program but because they take serious the responsibility to help others.

Print
Members Opinions:
[Delete]
Kudos for getting it right on the trusties v. trustees issue. I am so proud!

The vast majority of inmates in Cannon County are our own people, our sons and daughters, our cousins, our neighbors. They will continue to be part of our community. We need to be concerned about their future as well as their punishment.

McGowan
[Delete]
What a positive effort in moving FORWARD in the right direction for the community, the jail and for the inmates (who are exactly as CutiePie said - or sons, daughters, cousins, neighbors and friends). Hats off to this "trusty program".
[Delete]
My hat is off to Sheriff Young and his staff for improving the looks of not only the city and county, but for the great job he is doing. It is so nice to see positive acts and not so much bad press. The inmates are doing a great service for all of us. Keep up the good work. Your hard work is not going unnoticed.