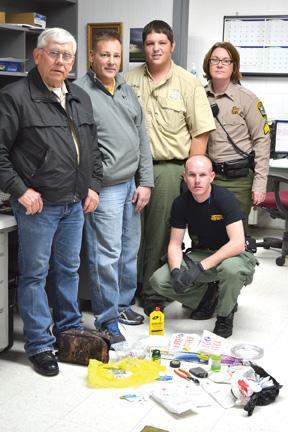 A trio of suspects was arrested by the Cannon County Sheriff's Department on meth related charges.

Arrested were Rodney William Lack, Twila Kay Lack and James David Hopkins at a home on Jim Cummings Highway.
Investigator Brandon Gullett had received information that the Lacks were manufacturing meth-amphetamine at their home.

This tip prompted a check of the NPLEX registry which revealed both Rodney and Twila Lack had been purchasing medicines containing pseudo on a regular basis at several pharmacies located in Murfreesboro.

"I ran a criminal history check on both Rodney William Lack and Twila Kay Lack. I then found that Twila Kay Lack had been charged with promotion of methamphetamine manufacture in April of 2010 by Officer John Fesmire with the Woodbury Police Department," Gullett said.

The officer then obtained a copy of the police report from Chief Kevin Mooneyham stating Mrs. Lack had been in possession of lithium batteries, cold packs and other necessary items to manufacture meth.

Gullett then got a search warrant for the Lack residence. Sheriff Darrell Young had been parked across the street watching the home.

"I ordered the white male subject to place the bottle on the ground and put his hands up," Gullett said.

The subject was then cuffed and led to the front porch with the Lacks.

Gullett and Deputy McGee then conducted an inspection of the home discovering various amounts of drug paraphernalia including rolling papers, a marijuana pipe, and a small quantity of a green leafy substance.

A Feb. 11 hearing is scheduled in General Sessions Court.