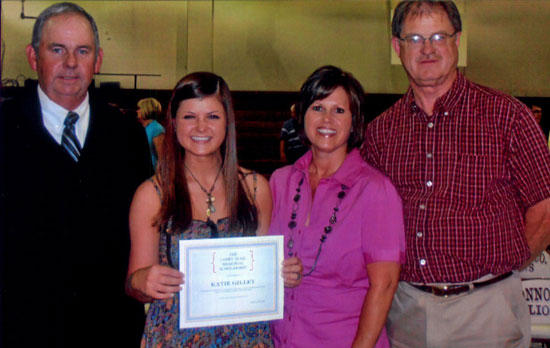 Class of 1970 representative and scholarship selection committee member, Grady George, presented the award of $1000.00 to Katie Allison Gilley of 382 Stones River Road, Woodbury, Tennessee.  Katie is the daughter of Kenny and Debbie Gilley.

While at CCHS, Katie was President and Vice-President of the Lioness Club.  She was active in the Beta Club, Health Occupations Students of America, Future Business Leaders of America and on the Journalism Staff.

In the Cannon County community,  Katie has participated in numerous service projects which include:  donating Christmas gifts to children in need, being a kindergarten teacher at Woodbury Church of Christ, collecting money for the seeing impaired, walking and raising money for autism and for the cure of diabetes and traveling on mission trips with her church.

Katie has chosen to attend Tennessee Technological University and major in nursing.  Katie stated that by receiving this scholarship, she would not only be the beneficiary, but also her community after receiving her degree.

The scholarship is awarded annually to a deserving high school senior who plans to pursue a college degree.  In order to be considered for this award, the recipient must be a student graduating from Cannon County High School with a GPA of 3.5 or higher who has been accepted for admission by an accredited college or university.  The candidate must submit an application and test results from the ACT and/or SAT.

The application must be accompanied by a 500-700 word, essay, which explains why he or she deserves this scholarship and how winning it could benefit the Cannon County community. Additionally, a complete high school transcript plus a letter of acceptance from the college or university the student plans to attend must be included with the application.

The Woodbury High School Class of 1970 established the scholarship fund in memory of Class member Larry Trail who passed away August 21, 2006.  Members of the class of 1970 are asked to contribute to the fund each year.

Because Larry’s work in the community was so well known and appreciated, the fund is open to contributions from anyone who desires to contribute.  All checks should be sent to CCHS, One Lion Drive, Woodbury, Tennessee 37190.  Each check should have the designation – Class of 1970 Larry Trail Scholarship

Print
Members Opinions:
honeymooner1978
[Delete]
Congratulations Kenny and Debby! We have known you our whole life here in Cannon County and you are both Pillars in the Community. We couldn’t be MORE proud of your daughter & family!