Trail of Tears walker to speak 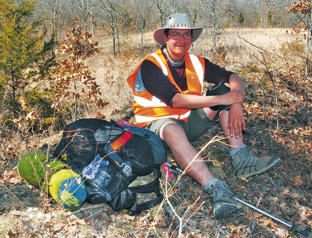 Ron Cooper takes a break during his 835-mile walk.

Ron Cooper, who walked the Cherokee Trail of Tears, will sign copies of his new book at 6 p.m. April 12 at Adams Memorial Library.

Cooper, a Lawton, Okla., native visited Woodbury on his 835-mile walk along the Trail of Tears. Due to horrible weather, he was invited to stay in the home of Woodbury Vice-Mayor Charlie Harrell.

"He welcomed me into his town and even let me stay in his home when I walked through on the Trail of Tears," Cooper said on his website. Harrell is playing host again to Cooper on his return to Woodbury.

Cooper, a member of the Comanche nation, undertook the long walk for several different reasons.

"I hiked the Northern Route of the Trail of Tears National Historic Trail. The story of this trail is representative of all tribes' struggles and perseverance leading into the 21st century," he said.

"I want America to remember the Trail of Tears and what happened on it," Cooper said. "It is not just important to Native American history, but also to American history. If you keep it in the forefront of memory, you won't let it happen again."

Cooper's book is entitled, "It's My Trail, Too: A Comanche Indian's Journey on the Cherokee Trail of Tears."

"It's My Trail, Too" is part trail guide and part memoir, with history of the Cherokee Removal woven throughout.

Cooper also shares the challenges of long-distance hiking and his philosophy and experiences as a 21st century Native American - a perspective that is rarely heard and thought-provoking.

"It's My Trail, Too" was independently published on Oct. 15, 2012, in advance of the 175th Anniversary of the Trail of Tears, which will be recognized this year. Ron Cooper currently lives in Whittier, North Carolina, and is employed at the Harrah's Cherokee Casino and Resort.

In January of 2011, Cooper began walking the Trail of Tears as closely as possible - and often directly on - the original roadbed. The journey of 835 miles took him through six states and lasted over three months