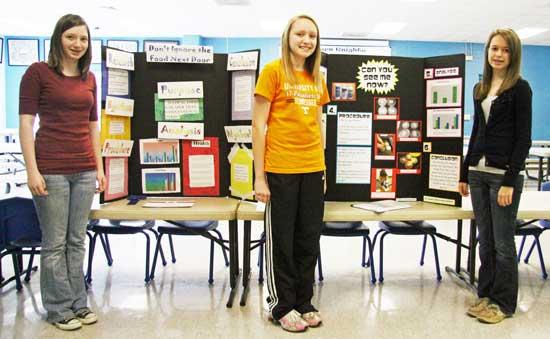 Two winners at the Cannon County Science Fair also proved to be tops in their class at the Regional Science Fair, held March 26 at Tennessee Tech as three Auburn School eighth-graders received the blue ribbon for first place. From left, Chloe Fann won first place for the second straight year, and Paige Tenpenny and Lauren Turney teamed to capture first place in the biology division. Fann won the math division. The students are shown with their winning projects.

Three Auburn School eighth-graders proved to be among the best of the best when they competed in the 57th Cumberland Plateau Regional Science Fair at Tennessee Tech March 26.

Chloe Fann became a repeat winner when her entry,  “Don’t Forget the Food Next Door,” earned first place in the Junior Division (7th-9th grade), competing in the mathematical category. Fann also finished first at the regional fair in 2010.

“It makes me proud to know that it was my work that won,” Fann said. “I was at the regional fair last year so I wasn’t nervous. I knew what to expect but there were some really good projects this year so I didn’t think I would win.”

Classmates Paige Tenpenny and Lauren Turney teamed to take first-place honors in the Biological Category for their entry, “Can You See Me Now?” They also were competing against ninth-graders in the Junior Division.

“It feels great to win first at the Regional Science Fair,” Tenpenny said. “We put a lot of hard work into our project. Lauren and I knew our project very well and that was important because the judges asked more questions (than at the County Fair). The judges really didn’t focus as much on our speech. They were more interested in what we actually knew about our projects instead of what we had memorized.”

Having an opportunity to view the other entries in their category made Tenpenny and Turney appreciate their win even more.

“There were some very good projects in the Biology category so that made it more challenging,” Turney said. “When you see what you are up against and realize how good those other entries are it really makes you appreciate earning first.”

Fann was nominated to compete as a Broadcom Master for outstanding performance at an SSP-affiliated fair. She will answer essay questions about her project and have an opportunity to compete at the 2011 National Science Fair.

“I don’t think anyone had ever done my project before and (the judges) were asking me questions that had nothing to do with my project,” Fann said. “They were strict in the judging and that makes you feel good when you do win.”

“My family spends a lot of time in the garden and everyone has a green thumb, except for me,” Fann said. “I was wondering if all the time and effort they put into it is really worth it. The research proved it is worth it.”

“I wanted to use the project for my sake, not just for the grade or because we had to, but I wanted to know I wasn’t damaging my eyes because I wear contacts,” Tenpenny said.

9937 – Auburn eighth-graders Paige Tenpenny, left, and Lauren Turney, right, won first place at the Regional Science Fair, held at Tennessee Tech March 26, for their project, “Can You See Me Now?”