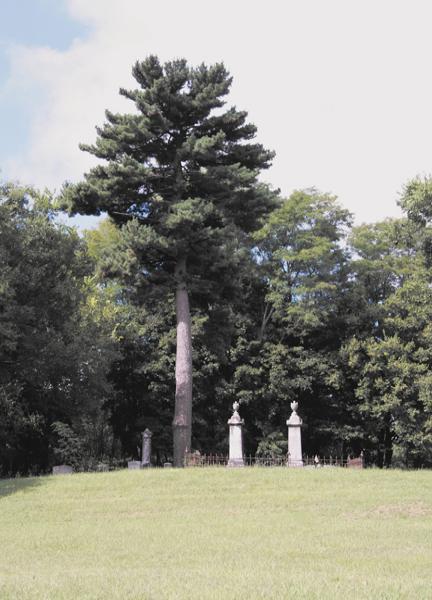 Editor’s note:  This is the final part of a series on area cemeteries

CUMMINGS CEMETERY - In this hallowed ground, rests the remains of one of Tennessee's most politically powerful men.

But few passersby know the remains of one of Tennessee's most politically-impactful men of the 20th Century, James H. "Mr. Jim" Cummings, (1890-1979), rests in the cemetery's hillside across Route 70S from Cannon County's livestock sale barn.

Rightfully, Mr. Jim is buried along a segment of Jim Cummings Highway, so named in the 1970s by the late state Rep. John Bragg, a Democrat from Rutherford County, who idolized Woodbury's legendary lawmaker as his mentor in Nashville.

Cummings' family roots go deep in Cannon heritage as evidenced by these remarks spoken by Mr. Jim's uncle, attorney W.H. Cummings, at Cannon County's huge Centennial celebration in 1936: "I love old Cannon County. Why shouldn't I? It was here that I first saw the light of day. It was here that my grandparents, my father and mother, my brother and sister, lived, loved and died, and their sacred dust not sleeps beneath the sod…

"To old Cannon County every drop of my blood, every fiber of my being, every pulsation of my heart is consecrated forever."

"Mr. Jim's memorial was likely attended by more state political leaders and dignitaries than any other Cannon County resident in history," verified 77-year-old Joe Davenport, a man who has devoted much of his life and career to preserving the region's history.

After serving as a former publisher of the Cannon Courier and school teacher, Mr. Jim, a staunch Democrat, became a lawyer before ultimately serving four decades in Tennessee's Legislature.

A research paper at MTSU by student Heather L. Bailey details how Cummings became a rural political force when he allied with state Rep. W.D. Haynes of Winchester and Rep. I.D. Beasley of Carthage.

Supporters respectfully referred to the three politicians as "The Rural Bloc." But detractors branded them as "The Unholy Trinity," a label that became known from the mountains of East Tennessee to the flat lands in West Tennessee.

"Cummings entered state politics during the reign of the Memphis-based Crump political machine. Edward Hull Crump's machine pushed an urban agenda through alliances with other politicians throughout the state," student Bailey's research recorded. "Cummings, however, formed an alliance with W.D. Haynes and I.D. Beasley to push a rural agenda."

Without "Unholy Trinity" support, many proposed bills perished, including numerous bills sponsored by the "Crump Machine" out of Memphis.

The late Gov. Buford Ellington described the three rural legislators' influence: "If those three decided to kill you on a particular bill, they could kill you. For at least 20 years, they were the spearhead of this 'Rural Bloc' in this state."

Cannon County's political powerhouse known respectfully as "Mr. Jim" never lost an election to the Senate or the House.

His run in the legislature was broken in 1949, when he served four years as secretary of state for Gov. Gordon Browning.

Historian Davenport's recent tour of cemeteries traced the lineage of multiple Cannon County families, dating back to original settlers in the late 1700s and earliest 1800s.

"When you visit a cemetery, it's an accurate trail of our heritage and history," assessed Davenport, a former superintendent and history teacher in Cannon County schools.

From the top of Short Mountain to the northeast, down the valley below to Gassaway, leading through Woodbury to the flat fertile farm lands of Burt, Bradyville, Midland and Readyville communities to the south and west, rests the remains of those who made Cannon County what it is today, in the county's approximately 200 cemeteries.