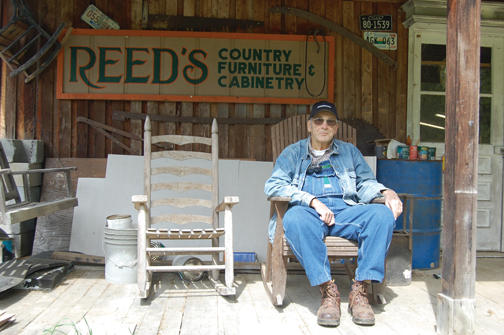 Ralph Reed takes a break on the porch of his shop.

By KEN BECK/ For The Courier

Ralph Reed has built hundreds of gorgeous pieces of furniture over the decades, ranging from beds, pie safes, dressers and cabinets to rocking chairs, quilt racks, hutches and coffee tables.

But in the past few years he has turned the deft touch of his hand to fashioning splendid pens, mostly made from trees in the vicinity.

"I use a little bit of everything local: sassafras, hickory, oak, hackberry, mulberry, cedar and Osage orange, which some people call hedgeapple," said Reed, who can be found most weekdays around lunchtime sitting at the "Liar's Table" in Joe's Place.

"I pick it out of my woodpile. I use a lot of spalted wood with a lot of black streaks in it. And I buy a lot of exotic woods from South America and Africa and have used olive wood that came from the Garden of Gethsemane [in Jerusalem]."

With a 5-inch-long, ¾-quarter square-inch block of wood, the 81-year-old woodworker crafts these handsome writing instruments that he offers to the public at prices ranging from $20 to $35, depending on the type of wood.

"I saw pictures of 'em in books and catalogs. I thought I'd try," said Reed about his "pen-spiration."

He starts out with his piece of wood by boring a hole through the middle of it with a jig. He then glues in the brass tube in which the works fit. Next he turns it on a lathe, puts the parts in and presses it together.

The craftsman also produces pocket watches embedded in wood, which he sells for $25 to $35.

But for the majority of his career, Reed, who was born in the Sunny Slope community to Charlie and Birdie (Rogers) Reed, has made much larger pieces.

"I built a lot of cabinets and furniture. It's been in my family [the knack]. I had a couple of uncles that were woodworkers, but where I learned was from my brother Howard. He's retired from Haynes Brothers," said Reed.

The Cannon County native served in the U.S. Army from 1952 to 1953 and later worked for two cabinet shops in Murfreesboro. Eventually he went into business for himself, building and selling furniture commercially.

"There aren't much that I haven't built. We'd go to the craft shows. We went to Bell Buckle for 14 years," says Reed, who has been married to Betty Jean Mooneyham, who works at Woodbury Nursing Center, since 1954.

The couple has a daughter, Vicky Nell Phillips, and a son Jeffery Allen Reed, and four grandchildren, with the first great-grandchild on the way. Reed has made a bed and chest of drawers for each grandchild.

While the woodworker has sold plenty of pieces of furniture to customers in Cannon and Rutherford and surrounding counties, he has placed his handiwork in homes across the Southeast and in such states as Michigan, New Mexico, California and Alaska.

Closer to home, he crafted the podium and communion table in the Woodbury Church of Christ, and he and his brother constructed the windows holding the stained glass in the church and put them into position.

What skills does it take to make finely detailed pieces of furniture that eventually become family heirlooms?

"You really got to pay attention and watch what you're doing. You can't do it haphazardly and you gotta like it," Reed answers.

Under the weather in recent months, the man who transforms wood the way a metal artisan crafts gold and silver into beautiful jewelry, says that when his health improves, he will return to making pens.

"I won't be attempting any larger pieces anymore," said Reed. "I plan to do more work but nothing big, just pens and craft stuff.

"I been real lucky. Only nicked a finger or two after all these years," says the man who knows his way around saws, lathes and the wood of Cannon County.

Print
Members Opinions:
ewimbush
[Delete]
God gave him a gift and he has brought smiles to many ladies for the beautiful workmanship.