The Day After: Business As Usual At Election Office 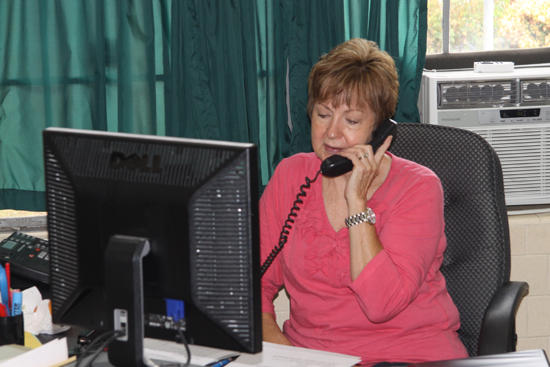 Mary Lynn Bush was back at work today in her former position of Cannon County Administrator of Elections, which she will hold on an interim basis until after the November election.

Interim Administrator of Elections (AOE) Mary Lynn Bush was on the job today, the morning after being appointed by a 3-1 vote of the Cannon County Election Commission.

Bush formerly served as AOE but was not reappointed in 2009. Her certification is not current; however, she may still serve in her current role.

If Bush opts to seek the permanent position following the November election then she would recertify.

As Bush made calls to the State of Tennessee to verify such questions it became known that several poll workers could not be utilized in the upcoming elections because they work for either the County or City of Woodbury.

Commissioner Sue Patrick was at the Election Commission Office volunteering today. As an election commissioner Patrick may volunteer but can't be paid. Commissioner Louise Mayo will volunteer in the office Friday. Patrick said the state office has said it will assist where needed.

Print
Members Opinions:
mudd
[Delete]
So glad you are back Ms. Lynn!
tntneal
[Delete]
What would have happened had this mistake not been caught & the aforementioned county and/or city employees been allowed to work at the election polls?

mkeller
[Delete]
Who caught this mistake and when? Better yet who made this mistake?
I was of the opinion that the poll workers were chosen by the Election Commissioners. I know they had a large discussion about being sure there was an equal number of Democrats and Republicans. What about us true Independents?

[Delete]
Shirley Young was a most capable employee of this office previously. It seems strange that her offer to volunteer was turned down but I guess rules are rules. Thanks Shirley for the spirit of your offer and know that your previous work is appreciated. Ms. Bush was also a most competent AOE when holding this position previously. Cannon County is fortunate to have such qualified individuals willing to step in and perform.
Tennessean
[Delete]
I agree with mkeller...What about those of us who are Independents? I can't vote in the primary unless I declare a loyalty to either the Democrats of Republicans. Where is the balance in the Election Commission for Independents? I believe to balance the election protocals we need some representation that isn't required to cater to either party...
[Delete]
Independents were all over the ballot in 2010 during our general election because no one wanted to run under the Democratic Party name.

Of course I agree because I would not want to be associated with it either, but it shows a lack of commitment to the party you claim to associate yourself with in my opinion.

Primaries don't have Independents because there is no Independent Party. Those are primaries specifically for Republican or Democrat candidates and that is why you have to choose. The candidates choose, so therefore you have to also.

mkeller
[Delete]
While being a true independent, I do admit to leaning to the conservative side. I have no problem with choosing a party in the primaries. My main concern was the effort that some election commissioners put into insuring an equal number of Republican and Democratic poll workers with no such concern being given to independents.

I do not pledge to any party because to do so and then not vote for that party's candidate would not be showing my loyalty to the party I was pledged to. I reserve the right TO ALWAYS VOTE for the candidate and not for the party.

I am of the belief that one of the major problems with our government today, federal, state, and local is loyalty to the party and not for personal belief in what is the right thing to do. Most elected officials go into office with a set of ideals to represent the people but once elected they suddenly become more concerned with their own personal re-election. I am of the belief that most elected officials who have been in office for more than two terms are concerned with first their re-election and then maintaining or increasing the power of their party. If there is sufficient time, they will try to do what is right for the people. They should be voted out regardless of party. I feel we have too many professional politicians who have no real knowledge of the day to day life of the people they represent.
Jack


[Delete]
Jack, I see your dilemma and would agree with placing more Independent poll workers in the process if there was a way to figure that out.

The problem is the "true Independent" voter cannot be identified because you must choose between Republican or Democrat in the primaries. That aligns you with one specific party when the vetting process of determining poll workers is determined by the Election Commission.

From what I witnessed during one of those vetting processes for poll workers by our Election Commission is to simply see who voted how in the last few primaries. They use those votes to determine if you are a Republican poll worker or a Democratic poll worker.