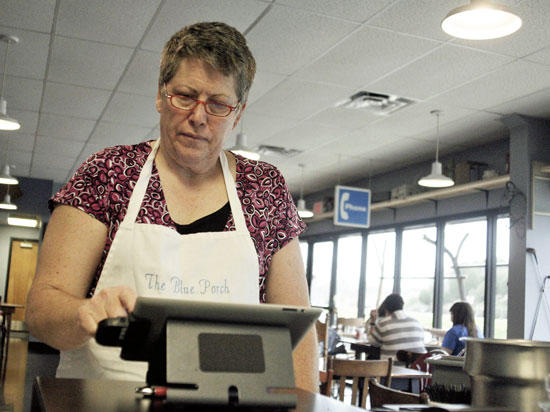 The Blue Porch @ the Arts Center owner Wanda Thompson completes a transaction on her iPad using the ShopKeep application, a point-of-sale system. (Photo by A. Thompson)
Hundreds of local app users received a coupon notification from Maple Street Grill on Wednesday afternoon good for dinnertime.

"As a small business, it's hard to keep up with the chains," explained Mike Zelenak, who owns Maple Street Grill and Maple Street Uncorked in downtown Murfreesboro with his wife, Debbie.

"But, none of them really have an app … we thought it would be a good idea. It's unique in this area, and no one else in town has an app for their restaurants."

As of last week, about 350 Maple Street Grill fans had downloaded the app to their tablet or smart phone. The restaurant also revamped its website to offer online ordering, which has helped to streamline the process for take-out orders.

The Zelenaks aren't the only small-business owners utilizing advanced technology offerings  – more than 200,000 companies in Middle Tennessee are doing the same.

According to newly released data from the 2012 AT&T Small Business Technology Poll, almost one-third of businesses surveyed use mobile apps regularly, with key reasons being to save time, increase productivity and reduce costs.

Mobile apps are gaining importance for small businesses that use them, with half saying they could not survive – or it would be a major challenge to survive – without mobile apps, a 31 percent jump over last year, according to the press release.

Obviously the types of technology vary from small business to small business, depending on the size, purchasing frequency and tasks performed.

Local Americana musician Sam Lewis said he has increased his sales 100 percent by using Square, a square-shaped credit card reader that plugs directly into a smartphone or iPad.

Lewis said he was limited to accepting cash or hauling around the old-fashioned credit card reader when selling merchandise at his shows.

"It's an easy tool," he said, "and it doesn't take more than 30 seconds to process. This is a huge step in the right direction."

Square charges a 2.75 percent fee for each transaction – Lewis estimates he makes about five sales each month – and posts to customers' bank accounts within 48 hours.

"At that price, it's a deal for any business," he continued. "I talked a lawyer friend of mine into getting one, and he's been using it for payments from his clients."

Aaron Thompson of The Blue Porch @ The Arts Center said he and his mom, Wanda, initially considered the Square but opted for ShopKeep Point of Sale system instead.

"Point of sales systems are very, very expensive, and we thought if we're going to spend money, why not get one we can use for something other than just a cash register," Thompson explained.

After speaking with the owners of Just Love Coffee Roasters, who use the ShopKeep app, Thompson said he decided to give it a try.

He downloaded the program onto his iPad and now uses it as the restaurant's cash register.

Because of its portability, Thompson said he also uses ShopKeep and the iPad for The Blue Porch's catering events, as well.

Thompson is one of the growing number of small-business owners reportedly utilizing tablet computers.

According to the findings, iPad usage has nearly quadrupled over the past year, growing from 9 percent in 2010 to 34 percent in 2011, indicating that the iPad is the fastest growing technology among the SMB market.

"Our research has shown that for SMB owners, productivity and efficiency, which used to be the central benefits of technology, are now declining in importance compared to accessibility," said Godfrey Phillips, vice president of research at The Business Journals.

"Now, it is crucial that business owners have access to their business information and data, anytime and anywhere," he said. "The iPad, as well as smart phones and cloud computing, are all part of this new trend and are experiencing significant growth as a result of that need."