Streett Teacher of the Year finalist 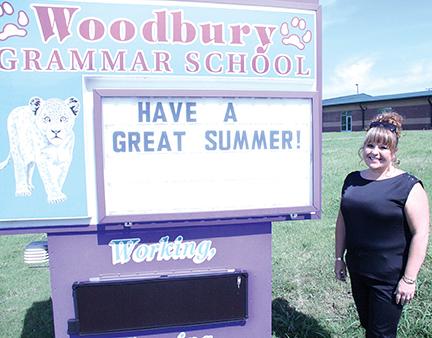 Students in Shannon Streett’s sixth-grade Woodbury Grammar classes will be extra fired up for the return of school next month.

Not only has Streett been named a finalist for Teacher of the Year in Tennessee, but Blue Bell will also provide her students with an ice cream party as a result.

“My students have been excited for me during this process,” Streett said. “They get pumped and they want a vote. They get excited because they feel it is a measure of success for them. They know I couldn’t do it without my co-teacher Steven Smith. We work in tandem and try to make learning as fun as possible.

“I think they are going to be most excited about an ice cream party Blue Bell is going to give (the students) for me making finalist.”

Streett, who teaches sixth-grade English/language arts and science at Woodbury Grammar, has been named one of nine finalists for Tennessee Teacher of the Year. She was recently named Upper Cumberland Teacher of the Year to advance to the final step.

Streett is one of three finalists in the Middle Tennessee region, joining Tracy Harmon, Franklin High School; and Chris three regions – West, Middle and East with three finalists in each. One winner will be selected from each of those “grand divisions” and the Tennessee Teacher of the Year will be chosen from that trio.

“It was really a surreal moment,” Streett said of learning she was named a finalist. “To be one of nine people is an honor in and of itself, but I really am excited about the chance to represent our county. I think the biggest challenge and exciting thing I see is I get a chance to be the face of Cannon County teachers. We have such a network of teachers that work so hard and we are doing great things. I feel it is an honor.”

The nine finalists will have the opportunity to join the State Education Commissioner’s inaugural Teacher Advisory Council. Members of this new body will offer insight, feedback, and advice on issues that impact teachers across the state.

“I think part of the state department’s goal is giving teachers a voice and putting teachers at the center of the change going on in education,” Streett said. “Whether I win, ultimately I am still on the Advisory Council so that is still giving a voice for Cannon County teachers and for us to have our place in the history of educational change.”

“Seeking feedback and advice from our Teacher of the Year finalists is a critical step in ensuring that we are learning from and listening to teachers from all regions of our state,” Huffman said.

Bonnie Patterson served as Streett’s Principal at Woodbury Grammar four years. Streett credits Patterson as someone who has inspired her career.

“(Streett) goes over and above what is expected,” Patterson said. “She works hard to form relationships with her teachers and parents. I saw her grow professionally. (Streett) has a great rapport with her students and it is why she is the teacher she is. Children want to be in her class. She makes each child feel like they are the best.”

Director of Schools Barbara Parker called it a huge honor for Streett.

“This is a great accomplishment for (Streett),” Parker said. “It is wonderful that Cannon County has such good teachers and that one of our own made the top nine in the state. (Streett) is an energetic, caring teacher. She has been a participant in various state trainings and was a Common Core coach. Her ability, her love for her students, and her desire to see the students succeed it top notch.”

The final winner will represent Tennessee in the National Teacher of the Year competition and is an ambassador for education throughout the year. To qualify, candidates must have been teaching full-time for at least five years, have a proven record of using creative, research-based teaching strategies resulting in measurable achievement, and be effective school and community leaders.

A panel of professional educators from across the state scored applications to identify the nine finalists.

Print
Members Opinions:
mitziadelle
[Delete]
All the way this time!! Love that her awesomeness is being recognized state-wide :)