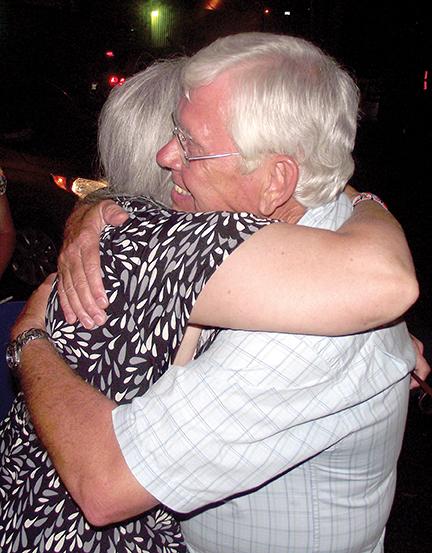 “Once we started checking into it, it turned out to be more substantial than we first thought. As a result, power was out at least 90 more minutes,” MTEMC Communications Coordinator Josh Clendenen said.

The outage forced Election Commission per-sonnel to rely on flashlights on the ground floor of the Cannon County Office Building.

Soon, the  “Old Yeller” fire engine was brought into action, supplying electricity for the Election Commission computers and a sound system for Election Chairman Corey Davenport to announce the vote.

A crowd quickly assembled adjacent to the rumbling fire engine to hear the returns.

Candidates, including Sheriff Darrell Young, joined the crowd which roared with delight at some of the announcements. Others, quietly listened as they heard their election hopes slip away.

Another sudden cloud-burst dispelled most of the crowd before the lights came back on at 10:12 p.m. but election officials struggled until early Saturday to get the final votes counted.

Sheriff Darrell Young was the biggest winner of the night becoming the first sheriff in 24 years to hold consecutive terms since Robert Simpson, who retired in 1994.

“That was my goal when I started this I wanted to make an impression on the citizens when I started. And, Lord willing, I hope to try for a third,” Young said.

The sheriff won every precinct during Thursday's vote. He said the victory felt awesome.

“I am tickled to death people have that kind of confidence in me. Never dreamed of that happening but evidently I am doing something right,” he said.

“Evidently I am doing what the majority of the people want … try to be fair and straight-up with everybody no matter who they are ,” the sheriff said.

Young said it was a tough race. “Brad (Hall) worked hard and did a good job with his campaign.”

Meanwhile, it's back to work for Young, who outlined some of his future projects.

“We're going to continue working on the drug problem. If I had the manpower I could do more,” he said.
Young plans on continuing work with CTAS, the County Technical Assistance Service, on future projects. “I have to give them a lot of credit for their help.”

It was a historic victory for County Executive Mike Gannon as well. Gannon is the only person in Cannon County history to win four consecutive terms for his post.

“I appreciate the citizens of Cannon County for placing their trust in me for four terms,” Gannon said. “I have made no promises except that I would do the very best that I can do. I will not sit back. I will work just as hard this fourth term as I did the first one.“I am very honored to have been elected one time, for that matter, but especially four times,” he continued. “The people of Cannon County have been very good to me and I have never done anything but try to help the county recruit jobs and get vital and necessary things in here such as the new ambulance center and home grants.”

Gannon first thanked his wife and family who stuck with him in what turned out to be a tough campaign. “I appreciate them. I have a lot of friends that have stayed with me for years and years and I appreciate that.”
The power outage and subsequent delay triggered some thoughts.

“The first thought that went through my mind was those poor election workers because people are going to be screaming for the outcome and there they are having to work with a generator with the lights out … that’s a tough job. It was kind of like when you were a child and we didn’t know the results until 1 or 2 in the morning. My hat is off to the election workers … in my opinion, they did an outstanding job considering all of the difficult situations they had,” Gannon said.

Grants became a major issue in the County Executive campaign.

“From a business standpoint, if I can take a $20 bill and swap with you and you give me $100 bill is that not good business? Those grants are set aside each year in the state and federal budgets. Somebody is going to get them. People say it is still tax money and that’s true but someone is getting them. Would you rather Warren County get them, DeKalb County, Rutherford County? Why not Cannon County?” he asked.

The County Executive cited the Courthouse revitalization project as a perfect example of how grants can help a community.

“We were going to have to do something about our drainage issue and it would have been 100 percent our cost. Tell me that’s not a good investment on your dollar,” he said.

“People want to mislead you about grants and say they cost money. Of course they cost money but if people would look into these grants and get all of the information and not just believe what they are told then they would see we can’t afford not to get grants. We would be living in the 1850s without grants,” Gannon said. Norma Knox busted two strong rivals to win the Trustee race.

“I would just like to thank everyone who got out and voted and all the support I had along the way … for everyone that cast a vote for me, I appreciate it,” Knox said. “We have come a long way (with our office) the last four years and we hope to keep progressing forward and looking for new ways to serve the people,” Knox said. Circuit Court Clerk Lynne Foster weathered strong rivals as well.

“It was a long wait and a terrible night with the rain and the storm … I was beginning to wonder if we were going to get any results but I was pleased when we did,” Foster said.

“It was a tough race, tough campaign. My hat is off to Hayden Bryson … he worked and he worked hard … I can’t say a bad thing about him. He ran a clean race and he was never negative toward me. I appreciate that,” she said.
Foster said, “We have a new computer system now and we have been going through that.” Her plan is to “just try to keep on doing what I have done and be honest. That’s what you do.”

Newly elected Register Sandy Hollandsworth isn't concerned about the transition from Debbie Morris, who held the post of Register of Deeds for 28 years.

“I have been here so long (15 years) and I know how things work … Debbie has taken vacations and I have run the show myself so I’m ready. I expect a very smooth transition. I have dealt with the usual customers, the surveyors, the attorneys … it’s going to be good,” Hollandsworth said.

“Every time I thought this may not work out well I would remember I have a lot of family and people working hard for me and trying to help me … I don’t want to let them down,” she said.

“I am proud of it,” Smith said. “I don’t know if anyone else has been elected that many times.
“I think we do a good job and we have a friendly office. We try to be nice to everybody and take care of all the people,” he said, adding that every election is exciting.

Smith has witnessed many changes during his years in office. “When I first came everything was done with a pencil and now every is computer.” His office has been audited 36 times and passed every one of them. “ I am proud of that,” he said.