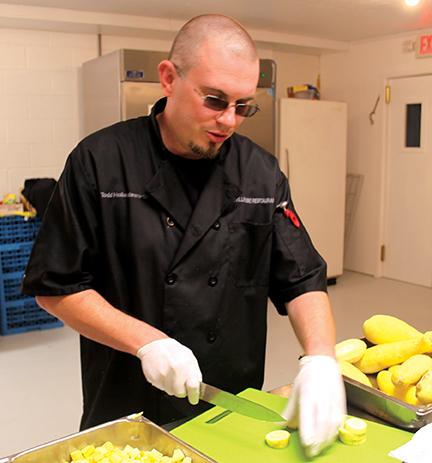 Chef Todd Hollandsworth will be manning the cookery.

“Billy and I started talking and this came up,” grinned chef Todd Hollandsworth.

The Billy in question is Billy Kaufman, of Short Mountain Distillery fame.

The new restaurant is located on a knoll overlooking the distillery. It isn’t ready yet, but the founders are hoping to open at the end of October.

“We are hoping to have a big, Halloween dinner, but that’s not set in stone,” Hollandsworth said.

“The kitchen was just approved by the state. We got a 99 score, which is almost perfect,” he continued.
Hollandsworth is a self-taught chef, who learned to cook from his mother, a caterer in Murfreesboro.

“He’s really putting his heart and soul into it,” Kaufman said. “He’s someone who is health-conscious and into trying new things.” But the Stillhouse will still specialize in Southern/ country cuisine dishes.

So what will make the Stillhouse Restaurant unique?

The site is one thing. It is being built in a beautiful farmhouse overlooking the rolling countryside. It’s location next to the distillery is another plus.

“It’s always been sitting there in the middle of the farm. It’s a huge space,” Billy Kaufman explained. “It’s very homey, but we are adding a banquet room and big decks overlooking the countryside. The location takes peoples’ breath away.”

“Build it and they will come. It’s like that,” he said.

“We are a destination, but we have nothing to eat. People wanted a place to sit down that was air-conditioned. The restaurant is a solution to that,” Kaufman explained.

If the response the Stillhouse has been receiving on Facebook is any indication, “it’s going to take off,” Kaufman said. (http://www.facebook.com/pages/Stillhouse-Restaurant/)

“The restaurant is a no-brainer for people coming to visit the distillery. They can have a great meal with great atmosphere,” he said.

Make that an ORGANIC meal with locally sourced meats and locally grown produce.

That unique factor is expected to draw visitors from across Middle Tennessee, particularly from Murfreesboro, Smithville, McMinnville and Nashville.

“We’re already talking about having special music and special events like a night for local residents,” Kaufman said.
“Hopefully, liquor by the drink will pass,” he continued. “I think people thought it (alcohol) would be corrupting, but all we are doing is to bring people to Woodbury and Cannon County and they will bring in guests from across the country.

“Liquor by the drink will give Cannon County a real shot in the arm. People will begin to realize that it’s a perfect place to get away to the country,” Kaufman said.

Meanwhile, construction continues at Stillhouse Restaurant. Much of the interior is complete and work has begun on the banquet room. A smaller room, perfect for meetings, is also under construction.

Kaufman’s ultimate goal is to make the distillery and surrounding properties “a space that highlights the best we do” in Cannon County.