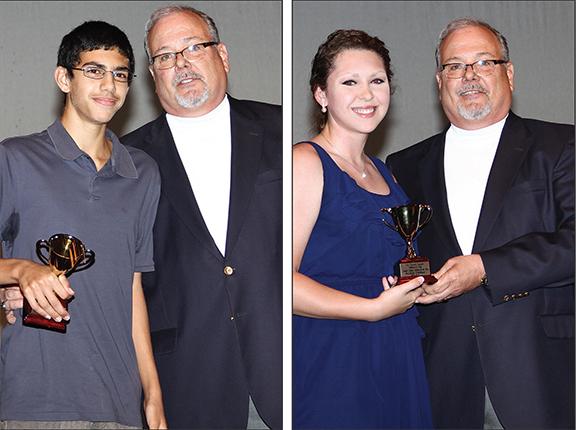 Umar Rasul and Rebekah Faulkner won the Publisher's Cup at the Courier Hall of Fame banquet.

Time management is not an issue for Rebekah Faulkner and Umar Rasul.

The award was presented during the fourth Cannon Courier Hall of Fame and All Sports Banquet at The Arts Center of Cannon County Thursday (May 15).

Rasul, a four-year member of the cross-country and soccer teams, is Cannon County’s Salutatorian.

Faulkner, a four-year member of the volleyball and girls basketball teams, ranked third in Cannon County’s Class of 2014. She is the top female graduate in the class.

“We consider the Publisher’s Cup the top awards given because these individuals have demonstrated an ability to balance academics and athletics,” Cannon Courier Publisher William R. (Ron) Fryar said. “Not only do they balance the two, but they also compete in multiple sports and at a high level so they are proof you can excel in the classroom and in the athletic arena.”

Faulkner was a strong factor in Cannon County’s run to the TSSAA Class AA State Tournament in 2014. She earned All-District Tournament honors and was a second-team All-District 8-AA selection. Faulkner thrived in her senior season. The strong-willed post turned in numerous double doubles and was a workhorse in the paint.

Faulkner will continue her career at Sewanee – The University of the South.

“It is such a honor to win this award,” said Faulkner, who also was named the Volleyball Player of the Year. “I am very appreciative. I think award means a lot because it is for doing well in the classroom and in sports. I have tried to do my best in both areas. It’s not easy. You have to make time but it is possible.”

Rasul is one of the top scholars in Cannon County and has options of attending Ivy League schools on academic scholarship. The personable Rasul was a charter member of the school’s cross-country team, and he has been a mainstay on the soccer field as a forward throughout his Lions’ career.

Rasul never allowed his academics to take a back seat to extra-curricular activities.

“Umar is a class act and a hard worker,” Lions soccer coach Shannon Gannon said. “He is an intelligent young man and a hard-working athlete. He always has a positive attitude. Umar is good choice for this award”